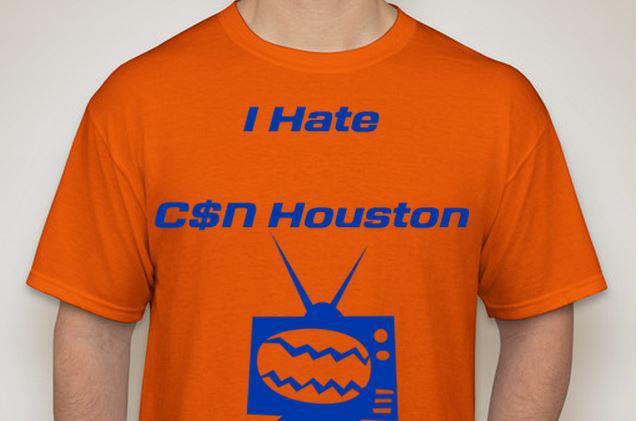 This piece originally ran on Dave's site What You Pay For Sports. Dave will be writing original pieces on here from time to time in addition to having his work syndicated on occasion.

A bad product is difficult enough to sell as it is. It’s even harder to sell when you tell the public you don’t really care how bad it is.

So it goes for Houston Astros owner Jim Crane. His team has by far the smallest payroll ($24.33 million) in Major League Baseball. Predictably, it has the fewest wins, too, tied with the Miami Marlins. While Crane’s strategy of building up the farm system and bringing up prospects over the long term has supporters, his telling fans they can “write a check for $10 million” if they want a better team isn’t exactly a genius PR move.

It’s also just one reason why Comcast SportsNet Houston, the Regional Sports Network partially owned by the Astros, finds itself on the losing end of a carriage war — one more thing the Astros are losing.

After the Astros and the NBA’s Houston Rockets both fought for years with Fox Sports over network ownership, Comcast struck a billion-dollar deal with both teams last year that gave them the ownership they were seeking. The Astros got 46.384% of the newly formed CSN Houston, while the Rockets got 30.923%. The deal promised to be a $60-million-per-year windfall for both teams.

A funny thing happened, though, on the way to that windfall — nobody wanted to pay for the new network. CSN Houston launched last October in the roughly 1 million Houston-area homes that subscriber to Comcast, which is about 40% of the market, but other major carriers — DirecTV, Dish Network, AT&T, Suddenlink, etc. — all said they wouldn’t agree to Comcast’s carriage demands.

At the heart of the dispute is Comcast’s belief that because Houston sports teams have a large regional fan base, CSN Houston is a truly regional network and deserves to be carried in most of Texas and its surrounding states. The carriers have countered that, no, CSN Houston is a local channel that covers local teams — the Astros, the Rockets, and the Houston Dynamo of MLS — and they see no reason to carry the channel outside of Houston at the rate that Comcast is demanding, which is reportedly as high as $3.40/month per subscriber.

The standoff lasted for so long that Houston Mayor Annise Parker offered to hold a summit last April with carriers and CSN Houston officials in order to reach some sort of resolution. As the mayor wrote in her letter to all invited parties:

The proud followers of our Houston teams – many of whom have paid for the venues where the Astros, Dynamo and Rockets compete – have been patient as your negotiations with Comcast SportsNet Houston have unfolded. That said, as the Rockets push toward the NBA playoffs and the Astros and Dynamo seasons get underway, the situation is intolerable.

The emphasis in that paragraph is mine. The city paid for the arenas for these teams, and now the network owned by those teams is demanding a huge premium to show those games on TV. Add that to the outrageous price — even the YES Network charges a lower fee — and Jim Crane’s screw-winning-now approach to building the Astros, and you can probably guess the fan reactions…

That’s just one comment taken from David Barron’s blog at the Houston Chronicle. Read through the comments on articles like this, this, and this, and you’ll find zero support for CSN Houston and its owners among Houstonians.

When sports fans in your city are contacting carriers and telling them not to carry the channel that shows their local teams, that should be a sign that you’re doing something very, very wrong.

What we have here is a massive overreach by both Comcast and the Astros to try and wrangle an unreasonable amount of money out of pay TV subscribers. Seven months later, the Rockets are gone till November, nobody wants to watch the hapless Astros, and most anyone who cares enough to watch the Dynamo can probably afford to buy tickets to watch those games in person. As a result, CSN Houston, which was supposed to bring $60 million/year to the teams that owned it, is on pace to make only $40 million in carriage fees in its first year of operations. Even attempts to offer the carriers a “free preview” of the channel this month have gone horribly wrong.

Perhaps this is why George Postolos, the Astros’ president and CEO who kept harping on about “fair market rate” for the channel, resigned from his position on Monday.

Clearly, that “fair market rate” is not $3.40/month per subscriber, and since Houstonians aren’t switching to Comcast in droves so that they can pay that much to watch the worst team in baseball, CSN Houston will have little choice but to give up its hard line and lower its price in order to get the carriage it wants. How soon that happens remains to be seen.

Perhaps the bigger question, though, is this: is the CSN Houston fiasco just one city’s response to a team owner it doesn’t like, or is this a sign of things to come? Could we see this same situation play out soon in Los Angeles, where SportsNet LA promises to drive up the price of TV by $5/month, or in Philadelphia, where a battle for the Phillies between Comcast and Fox Sports seems imminent? Would fans reject those new channels as well? Would non-fans give up on cable in protest? Is the RSN market a bubble on the verge of bursting? What happens to pro sports when it does? We might get to find out before too long.