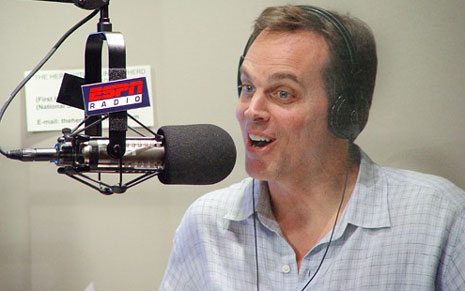 One of ESPN's most controversial voices will have a new outlet to vent his unique but oft-criticized views when Colin Cowherd's new Sunday morning football show premieres this weekend.

Cowherd's show, which is quite literally being called "Colin's New Football Show" (what will they call it when it's no longer new?), will air Sundays at 9 a.m. ET on ESPN2, giving Cowherd the ability to capitalize on the transition period in which many of us are still reflecting on Saturday's college football action while preparing for Sunday's NFL games.

“This won’t be your typical pregame show because I’m hosting it and I’ve never played in the league and I don’t even know that many people who did play in the league," Cowherd said in an ESPN press release Tuesday. "We know what we are, and what we’re not. And we’re not going to take ourselves too seriously. The show is me and smart, funny guys hopefully coming on the show and making it better. I’m really excited for it.”

Honestly, while Cowherd can be annoying and has had some ridiculous troll-like moments over the years, the host of "The Herd" on ESPN Radio at least brings a wealth of knowledge and some edgy opinions to Sunday morning. The star-studded pregame shows that air a couple hours later have become borderline unwatchable, so I'm cool with some original content starring a professional media type who has (hopefully) done his research.

His weekly guests — Matthew Berry, Chad Millman and Tom Waddle — only bolster the program's chances of surviving, at least from my perspective. This is almost the antithesis of the crap Fox, CBS and ESPN bring to the table later in the morning, and grabbing college football fans will also help.

But things might also get a little bit weird as Cowherd and ESPN try to take the zaniness to a strange new level. Here are some other segments planned for the show:

Digital originals – original digital shorts featuring Cowherd debuting on You Tube during the week will be used going in and out of breaks, including interviews with Bristol “Car Wash” guests conducted in a prop closet

Cash, Car, Kids Game – viewers can play along from home and make picks with Cowherd.

Fake infomercials for "Colin-created" products? Is this serious? And this is replacing Outside the Lines? Sounds lame. Combine that silliness with Cowherd's penchant for sensationalism and in spite of the fresh perspective, this thing could die before we ever have to worry about the presence of the word "new" in the title. But if the content takes precedence, Cowherd keeps things tight and the sideshow doesn't become a distracting element, there's a chance this show succeeds.