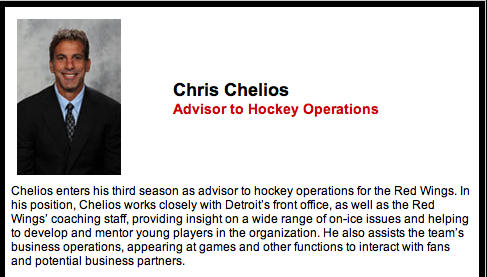 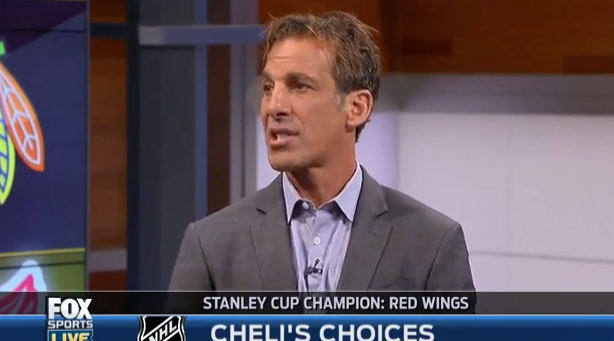 Fox Sports Live has made it a point that unlike SportsCenter, they are actually going to talk about the NHL and show highlights.  Hockey fans rejoice that a national highlights and news show actually plans on giving more than cursory coverage of your sport!  Part of that strategy is building an alternative to ESPN, part is serving a neglected fanbase, and part of it is so Jay Onrait can scream BOBROVSKY!

Fox Sports 1 hired Hall of Fame defenseman Chris Chelios to serve as their hockey analyst for the season and he appeared on Monday night's Fox Sports Live to preview the upcoming season.  The segment is fine, but there was just one thing that was bothersome about it and Chelios' role at Fox Sports 1…

Chris Chelios is not just a Fox Sports 1 analyst, he works in the Red Wings front office.  Look, he has a profile on the Red Wings website and everything…

Now, credit to Fox Sports Live and Jay Onrait that Chelios' role in the Red Wings front office was disclosed to viewers.  But when Chelios starts interchanging talking about the Red Wings in the first person it gets complicated.  Chelios' job with the Red Wings presents a massive conflict of interest when he picks them on Fox Sports Live as his Stanley Cup champions and says "I really like our team."  Who else is he supposed to pick to win the Stanley Cup but the team that's currently writing him a paycheck?

The question viewers have to ask Fox Sports 1 is whether or not they're getting a square deal from Chelios and the network's NHL analysis.  Or, is Chelios' analysis always going to be slanted in the favor of the Detroit Red Wings?  There's nothing worse for an analyst than a perceived bias or conflict of interest (see: Mark May vs The Ohio State University), especially for a new network just earning trust with viewers.

This conflict is not isolated to Chelios.  ESPN has had to face the same questions with Magic Johnson and the Lakers and now TNT will have to be wary of Shaquille O'Neal owning a piece of the Sacramento Kings.  The Red Wings describe Chelios' role with the team as "working closely with the front office."  Of course Chelios is going to love the moves the Wings made in the offseason, he helped to make them.

If Shaq picks the Kings to win the NBA Finals this year, we'll know these conflicts of interest are really starting to become a major issue.  At least the Red WIngs are actually good.