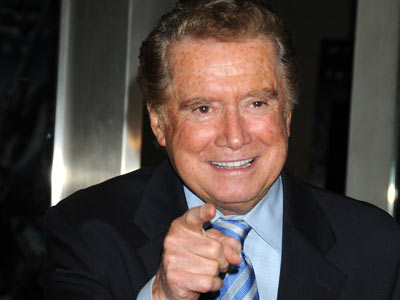 In preparation for its August launch, the announcements are coming fast and furious for Fox Sports 1.  Today came the unveiling of the cast that will join Crowd Goes Wild, the sports potpourri show hosted by Regis Philbin.

Apparently that wasn't a gag the first time it was announced.

And no, I'm not putting that dumb exclamation mark in the title.

Yes, Reege will be there from Day 1 and he'll be joined by a panel that can be best described as… completely and totally random.  Like, almost as if Fox Sports put 10,000 people into one of those spinning lottery machines and it spit out the names you'll see below.  Fox is trying to give it the hard sell (as you'll see below) by promoting the ecclectic personalities that will appear.  One can't force eclecticism and irreverency, though.  When you do that, you end up with UNITE.  May it rest in peace.

Alas, FS1 will be giving this UNCONVENTIONAL and UNPREDICTABLE show a try with Reege, a Wall Street Journal columnist (Jason Gay), a former tennis player turned comedian (Michael Kosta), a former NFL player (Trevor Pryce), a former Sky Sports News host (Georgie Thompson), and an online host (Katie Nolan).  If you're wondering how it's all going to mesh together – don't worry, you're not alone.  Here's the announcement from Fox:

“There are sports news shows, debate shows and shows that present a single point-of-view, but CROWD GOES W!LD is aiming for a fresh approach,” said Executive Producer Michael Davies. “CROWD GOES W!LD is going to live in the moment, presenting multiple points of view, with the conversation often influenced by the audience through social interaction. Regis, Jason, Michael, Trevor, Georgie and Katie will embrace the freedom and spontaneity this free-flowing, less staid, format offers and I have no doubt fans will too.”

In addition to featuring conversation directed by its panelists’ contrasting viewpoints and social interaction with viewers, the alternative CROWD GOES W!LD (@CGW) welcomes in-studio guests from sports and entertainment, and incorporates every asset FOX Sports offers, ranging from live satellite interviews with on-air personalities to cast members serving as correspondents at major events.

See, here's the thing I'm having trouble with… how do you promote something as "fresh" and "unpredictable" and wonky and zany when you employ as your host an 81 year old man who has been in the TV biz since the Johnson administration?

I hate to pre-judge anything too harshly, but I'm willing to predict that out of any show in the FS1 lineup this will have a major overhaul within months, if not weeks.  I can't imagine Regis Philbin having an appeal at all with FS1's fanbase and instead of letting something grow organically, this has "painfully forced" written all over it.  And, it's going up against the ESPN staples of ATH and PTI at 5 PM ET.

Although some of the individual pieces of this puzzle may be appealing and have a future at the network, I'm skeptical about the success of Crowd Goes Wild (especially with that crazy exclamation mark in the title).  Good puzzle pieces are nice, but you have to make sure those pieces eventually fit together to complete an actual puzzle.  Otherwise they're just a bunch of useless extra puzzle pieces.  And what good are those for?