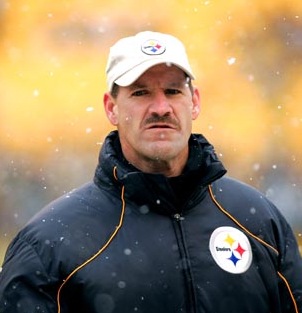 Former Pittsburgh Steelers head coach and current CBS NFL Today analyst Bill Cowher said in an interview with Newsday on Tuesday that he'll likely return to coaching sometime in the future. Despite that desire to return to coaching, Cowher hasn't been mentioned in any of this winter's coaching vacancies, and no teams have reached out to him about their openings.

Cowher resigned as Steelers head coach in January of 2007, four months before his 50th birthday. Much of Cowher's hesitance to return to coaching has to do with his family. Cowher's wife Kaye passed away in the summer of 2010 following a battle with skin cancer, and the former coach had a desire to spend more time with his family during her struggle. Cowher also has three daughters who have grown up, and their ages could push Cowher back to coaching.

At any rate, he'll be a viable commodity when he does decide to return to coaching. But which teams would wet Cowher's whistle? The Panthers are always talked about as a possibility due to Cowher and his family relocating to North Carolina after his resignation from the Steelers. The Jets could also be another possibility due to the constant drama involving a large market team that would look to make a big splash with a new coach. And even though they never fire head coaches, what about a return to the Steelers if an aging Pittsburgh team struggles under Mike Tomlin next season?

Cowher is a solid enough analyst on CBS, filling the coaching role that is taken by Mike Ditka on ESPN and by Jimmy Johnson on Fox. Out of those three, I personally like Cowher's insights the best due to his youth in comparison to the other two coaches and how recently he coached compared to those two as well. Losing Cowher would be a blow for The NFL Today, and it would be tough for CBS to replace him, though I imagine they would attempt to with a recently-fired coach from the league. Can't you just picture Norv Turner linking up with Shannon Sharpe and Dan Marino?