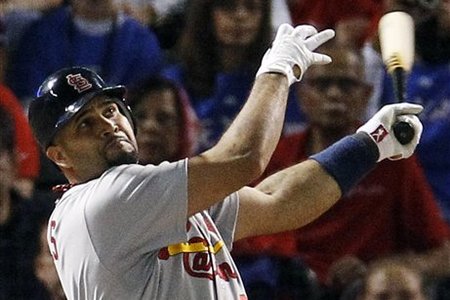 Two months ago, we brought you the story of former St Louis Cardinal Jack Clark saying on the radio that Albert Pujols was a steroid abuser. Pujols vigorously denied the claims and threatened a lawsuit, while Clark and cohost Kevin Slaten were fired. Two months later, Pujols is going ahead with the lawsuit against Clark.

The exact wording of Pujols' lawsuit spells out the claims he's filing against Clark.

Clark's statements are lies that have damaged Pujols' reputation, causing him personal humiliation, mental anguish and anxiety, the suit says.

Pujols' suit says his character and reputation are "impeccable and beyond reproach" and calls Clark a "struggling radio talk show host."

It'll be interesting to see what happens here. Clark's statements were based primarily on hearsay from a conversation he had with Chris Mihlfeld, a former trainer of Pujols who claims to have injected Pujols with steroids in 2000. If the suit goes to trial, it could spiral out of control and lead to a breakdown of Pujols' entire life.

This case could either take shock jocks like Clark down to the ground floor (if found liable) or thrust their stock through the roof (if not found liable). Imagine if Clark isn't found liable for what he said – that could open a Pandora's box of potentially libelous claims on the airwaves for the sake of simply causing a buzz. I'm sorry, but I can't see any world where that's a good thing at all. It would be impossible to separate fact from fiction, and sports talk radio as we know it would be dead.