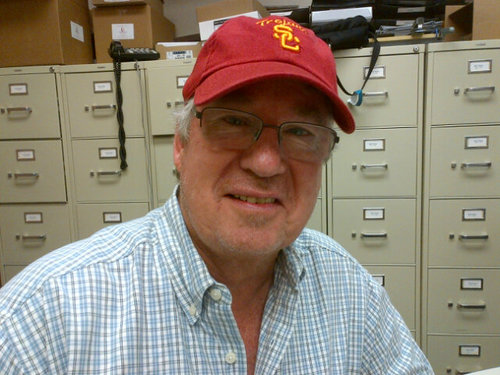 And you thought it was scary when there was a potential sitcom based on Colin Cowherd's life in the works!

The Cowherd sitcom never made it to air (thank you Lord), but now comes news via SBJ that another infamous sports media member might get their life turned into a television show.  Believe it or not, Los Angeles Times columnist TJ Simers is the next sports media personality to have a potential network show developed around his life.  Seeing as how it's not April 1st, let's assume this is factual:

Mandalay Sports Media is developing a TV comedy loosely based on the life of acerbic Los Angeles Times sports columnist T.J. Simers, one of several projects the 15-month-old sports production company has in the pipeline.

“The series is about an old-school reporter in a medium that is quickly evaporating and a daughter who is a participant in the new media,” Tollin said. “Ultimately, it will be a comedy focused on their relationship and the relationship they never had because he was always on the road and was kind of an absentee dad. He’s kind of trying to make up for lost time. She’s trying to teach the old dog new tricks.”

Could that possibly sound like a more formulaic television cliche?  Ugh.  The only thing missing in this scenario is Simers' character having to live with a roommate who has hilarious and ironic trouble getting women.  (On a related note, I nominate Bill Plaschke for this role.)

This puzzles me to no end.  Simers is a noted curmudgeon and troll whose most comparable people in the industry are Jay Mariotti and Dan Shaughnessy… what is it about his persona and personality that screams "likable television star"?  What exactly about Simers going up to Mark McGwire and trying to roll one over on him about steroids screams nostalgic family comedy.

You may have seen Simers' daughter in that free throw shooting "contest" with Dwight Howard that made its way around the internet.  I can picture the pilot episode now – father and daughter struggle with relationship issues and the true meaning of parenthood, but come together in heartfelt moment scheming to embarrass local college football coach who they mutually despise with absurd, illogical questions that have no basis in reality.

It's no guarantee that this will ever make network TV, as we learned with failed sitcoms based on the lives of Colin Cowherd and Mark Schlereth.  Regardless, I'm not holding out hope for a classic reboot in the vein of Everyone Loves Raymond.  Simers' persona (or at least how he's perceived by the wider public – it's getting harder and harder to distinguish real people from the sportswriting characters they play in print and on television) pretty much is the negative stereotype of the 2013 Sports Columnist, equally as interested in making himself the story rather than the actual sports.  Maybe that makes his character perfect for the current wasteland that is scripted sitcoms.