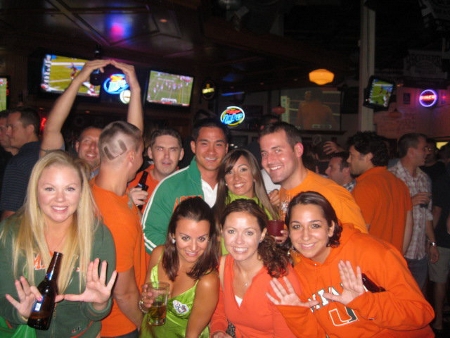 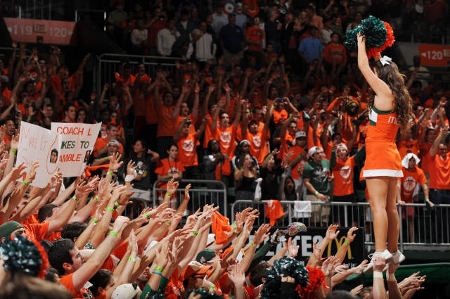 During last week's Duke vs. Miami game that was IN CORAL GABLES, a former Duke student and current MIAMI grad student felt she was not treated well sitting in the student section during the Hurricanes' 90-63 drubbing of the Blue Devils. In fact, Michelle Picon felt so offended, it compelled her to write to the Duke Chronicle about her experience at the game.

Picon's editorial does nothing but feed into the reputation Duke fans have for being pretentious, condescending, and having some sort of superiority complex because they go to Duke. Yes, Duke is an excellent school and yes, Duke has an excellent basketball team. But that's not enough to justify the behavior of its fan base nor is it an excuse for Picon's ridiculous letter.

"Our group of six—five current Miami medical students and one law student—comprised that spot of blue in a sea of orange, the calm and collected eye in the middle of the Hurricanes."

She is a Miami student wearing Duke clothes sitting in the Miami student section – what was she expecting to happen? And please – "the calm and collected eye?" More like the subdued and quiet eye because their team was getting curbstomped. If the score were reversed, would this letter even exist?

"Although we somehow walked away unscathed, our treatment at the hands of the Miami student body, mascot and senior administration was even more disparaging than the whooping our boys received on the court."

The mascot? The mascot has far more important things to do, but okay.

"My classmates and I had been in line for the game for hours when the Dean of Students first appeared. He expressed his disbelief at our Duke apparel, and continued to express his disapproval even after we explained we were former Duke students excited to watch our team, and had no intention of actively cheering against Miami. He told us condescendingly that he would allow us to remain in the student line, but he assured us that on behalf of President Donna Shalala, they were not going to let us easily into this game to cheer for Duke in the front of the Miami student section. I assumed he was just giving us a hard time. After all, we are tuition-paying Miami students who were waiting near the front of the student line in accordance with all the correct university policies."

"In accordance with all the correct university policies"? Is she kidding? This is not a police report! And no one was suggesting that she and her friends WERE breaking rules. This is the type of uppity discourse they're known for – it's all formal with them. But why didn't she and her friends just buy tickets for the visiting section instead of lining up in Duke gear to sit with Miami students? They were laying themselves out as bait. Did they expect the Dean to sit down with them and offer them a spot of tea?

"Ladies and gentlemen, I f—ing kid you not, the Dean of Students and the Vice President of Student Affairs stood between us and the stadium, allowing dozens of people to pass us in line as they lectured us on our apparently deplorable and wildly unacceptable desire to show support for our home team. Four-plus years as Cameron Crazies, hard-earned Duke degrees and constitutionally protected freedom of speech notwithstanding, senior administrators of the undergraduate campus dared scold us for wearing Duke blue to a basketball game. The catty, disparaging and immature attitude they displayed during this exchange was astounding. The fact that not one, but two top university officials felt the need to bully six graduate students and attempt to punish us for a lack of “school spirit” suggests an unfathomable depth of insecurity."

I hate to break it to Ms. Picon, but her letter is exposing her as catty, disparaging and immature – not to mention insecure. She's writing this letter as if she's above everyone at the University of Miami, the very attitutde she is reeling against in her letter. Also, maybe she didn't get the memo, but Miami is private and therefore her freedom of speech probably doesn't apply. But even if it did – she and her friends got into the game, so what's the issue?

In September of 2010, a group of my Miami friends and I made the trek to Columbus, OH for the Miami vs. Ohio State game. In Miami gear. And we were heckled, yelled at, insulted, and photo bombed:

But we went there fully expecting that type of treatment. We were not thinking Ohio State fans would embrace our presence or buy us shots. Wait, I lied – an Ohio State fan DID buy me a shot because he said he felt so bad for me because of how badly our team was going to lose – hey, he was a jerk about it, but who am I to turn down a free shot? Anyway – that type of behavior is standard when wearing the away team's gear in the home team's town. If Ms. Picon had ever left Durham in her "four-plus years as a Cameron Crazy" she would know that.

Picon ends with this little gem:

"But I walked away from that game ashamed and embarrassed to be even remotely associated with the Miami undergraduates. Although Duke played the worst game I have ever seen, I am still proud to call myself a Blue Devil. This experience only served to deepen my appreciation and respect for Cameron Crazies, an exemplary group of boisterous, witty and dedicated supporters—the sixth man, a true fan indeed.

I'm confused – isn't she a graduate student and therefore NOT associated with Miami undergraduates? You cannot tell me that when Duke plays UNC the Duke fan base is "exemplary" towards UNC students. Is this just an instance where Duke fans prove they can heckle but not be heckled? In the world of college sports, you really have to have a thicker skin than that.

Whether Picon's account of her experience was 100% accurate or had the burn of an awful loss coming through, the truth is that, unfortunately, that type of behavior is expected, and common, and something I am SURE Duke fans have exhibited in the past. To claim they are above that type of treatment once again does nothing but prove the reputations they have are accurate. Apparently it wasn't just Dick Vitale that had trouble accepting what happened that night.