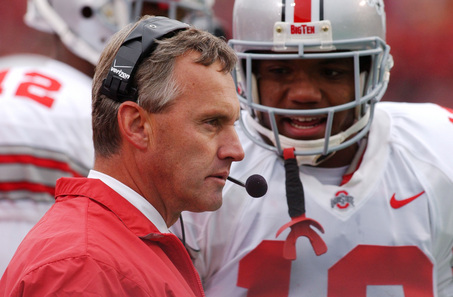 Length – 102 minutes without commercials (2 hours with)

Most Similar To – Unguarded, The Marinovich Project

Note – I am an Ohio State grad and was actually a student during the years featured in the film but have made an attempt to remove any personal feelings from this review.

Review – I was eager to get my hands on Youngstown Boys. Part of that was due to the fact that I was a sophomore at Ohio State during the famed 2002 National Championship season that was in large part fueled by the efforts of Maurice Clarett. But part of my anticipation was due to the fact that the Zimbalist brothers hit a home run in their previous 30 for 30 effort (The Two Escobars) and ESPN has had four strong showings in airing a 30 for 30/ESPN Film after the Heisman ceremony.

Similar to the other films that got the coveted post Heisman ceremony slot, Youngstown Boys is one of the longer 30 for 30 films. While half of this fall's crop fit into the 1 hour window with the rest fitting into a 90 minute slot, Youngstown Boys will air in a full 2 hour window on Saturday so word to the wise – strap in, snack up, get a fire going going, and perhaps an adult beverage if inclined.

But it's not just the time that will present a burden to some viewers but the tone of the film as well. Youngstown Boys is a lot heavier and morose in tone than I was expecting and a broad audience might be accepting of. While not uncommon for sports documentaries to dive head first into sad and serious subject matter, Youngstown Boys takes a harsh pivot about 45 minutes into the film as the story of Ohio State's unexpected and at times miraculous championship run wraps up and the prolonged demise of Maurice Clarett begins and takes up the bulk of the film.

In many ways, Youngstown Boys is an allegory or at the very least a subtle social commentary. Maurice Clarett was lightning in a bottle for a rabid fan-base thirsting for a national championship after decades without one. While the connective tissue in his narrative and Tressel's (the pair being from Youngstown) is somewhat oversold in the documentary, I think it was wise of the Zimbalist brothers to tie in the two stories using that shared background. Other films like Survive and Advance and Free Spirits somewhat struggled to tie in multiple interesting narratives into a cohesive story without the film being somewhat disjointed.

The first 45 minutes jumps around a bit covering how the pair came to Ohio State and their personal backgrounds and circumstances before embarking on an extended highlight reel of a bumpy and tense undefeated season. Ohio State fans will likely be perturbed that details of the season are not really explained and at times highlight sequences are either out of order or lack context. While most viewers will not take issue there, personally I thought it was somewhat of an odd choice that the filmmakers didn't highlight the fact that most of the peril Ohio State faced that season occurred with Clarett injured. Essentially, Ohio State was on the ropes (many times against very average opponents) in the majority of games in which Clarett didn't play. While Clarett's injuries are mentioned later on, it came off as an odd choice to not weave that information into the title run.

As much as I and other Buckeye fans tried to forget, the whole thing fell apart rather quickly. Clarett's last carry as a Buckeye was the National Championship winning touchdown. He was a hero with at least 2 more years and many wins in his future in Ohio and then likely stardom in the NFL. Fast forward about 4 years later when I was interviewing for my first job out of college (2000 miles away from Columbus at a software company), where three out of the four people that interviewed me poked fun of the fact that I was an OSU grad and Clarett had within the last 24 hours been arrested for a litany of charges that would lead to several years in prison. He was on a poster on my wall 4 years earlier and now I hated that he was the ice breaking comment tied to my education during an interview process.

The bulk of the film covers that fall and although free of any agenda or commentary, the main takeaway is that multiple institutions and individuals failed to pull Clarett out of his tailspin. The night and day tone of the first half and second of this film is something I can only really compare to Million Dollar Baby.

One thing that I found somewhat troubling is that Youngstown Boys didn't answer some of the unresolved questions I had about Clarett's demise. There are some WILD stories about Clarett's time living with reputed Israeli gangster Hai Waknine as well as the fallout from that relationship. It was exciting to see Waknine in the film yet I was miffed there wasn't much discussion about their time together and the circumstances of their relationship. There also wasn't much of a detailed explanation of the Clarett's legal issues as they're somewhat explained at a high level.

For the most part Tressel and his reign at Ohio State post-Clarett is largely dismissed after the first half of the film. There are some odd scenes touting his success after Clarett's departure through showing Ohio State in the Alamo Bowl (one of their few non BCS bowl appearances).

Much like Clarett's journey, the film concludes on a more positive note revealing Clarett's subsequent new found perspective and sense of self and a rekindled relationship with Tressel who also was spit out from his high perch at Ohio State via a NCAA scandal. The film sells the viewer the two are close again now and somewhat kindred spirits because of their Youngstown background. It's hard to tell how much of that is reality and how much of it was sold to connect the two narratives and give the film an uplifting ending.

Style wise, Youngstown Boys is pretty impressive with a good mix of interviews, news footage, music, game highlights. The plight of Clarett is given sympathetic treatment but I don't think OSU fans or their detractors will find the film "pro" or "anti" OSU, although former Athletic Director Andy Geiger takes it on the chin to some degree.

Ultimately I thought the film was quite good although the length and the depressing subject matter potentially could leave some not as impressed. That said, I wouldn't be surprised if Youngstown Boys sets a new ratings record given the time slot and the sheer size of the Buckeye fan-base. Although just outside the top ten, Youngstown Boys is the best effort from the fall 2013 batch and one that is a lot more ambitious in terms of themes and subject matter than a lot of the other recent 30 for 30 films.