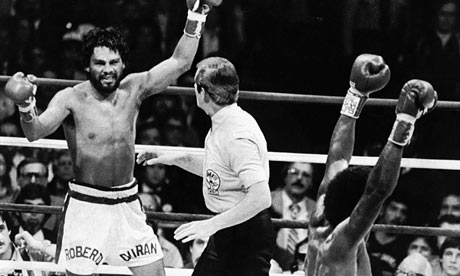 Most Similar To – Winning Time: Reggie Miller vs. The New York Knicks

Review –   At its core, No Mas is another great 30 for 30 although it's not fully reflected in my grade. Part of that speaks to the quality of the series as a whole, but also my dissatisfaction the last 25 minutes of the film which slid my assessment from a top 25 grade to a more modest mid 30's grade.

For younger viewers who are unfamiliar with the famous fight or just sports fans who have little or no knowledge of the iconic 1980 bout, No Mas will pack a potent punch. (This forced boxing reference will likely lead to a lot of readers leaving the site, saying No Mas!)

I came into the film with a pretty solid baseline of knowledge of Duran vs. Leonard II, the central event the film focuses, and one that predates my birth by a couple of years. That said, I only had the cliff notes version having not lived through the famed fight and hence I was excited to drill down deep into one of the more iconic fights over the last half century.

For the first 2/3 of the film, No Mas delivered the goods with great context and fight footage retracing the first match between the two, the leadup to the second fight, and the fight itself. Essentially the first 1/3 of the film focuses on both fighters, their background, and their first fight that set the stage for the rematch.  The middle third is close to flawless as you relive the excitement leading up to the rematch and take in a good part of the fight itself.

But No Mas gets a little lost in the third act as director, Eric Drath, goes in search for closure and comes home empty handed. I actually thought Drath would pull it off and tie a nice bow around the story, given his history directing sports documentaries. In addition to directing previous 30 for 30 Renee, Drath did a masterful job directing HBO's Assault In The Ring, another boxing documentary that searches for answers in regards to another famous 80's fight with unresolved question marks.

The greatness of Assault In the Ring (trailer here) is that Drath, delivers on his search for answers, finds some level of redemption for the remaining living fighter, and refocuses the blame and responsibility on that tragic fight onto trainer Panama Lewis (who is oddly featured in No Mas despite being the target of Drath's previous efforts).

So I went into the final third of No Mas with a sense of optimism that Drath would again bring some level of clarity and closure to fight that still befuddles sports fans and boxing pundits.

Similar to Assault In The Ring, the quest for truth involves some travel to arrange a face to face meeting as Leonard makes the trip down to Panama to reunite with Duran. There is an odd photo op, footage of Leonard traveling, and Duran playing pool, driving, and giving a tour of his house. The anticipation for their retelling of the fight is given tremendous buildup.  Would we be treated to some paydirt? (spoilers below)

Then for some reason, their meeting is staged in an empty arena in a boxing ring. The two stand and talk briefly, the whole exchange being awkward partially because they are in a boxing ring and there are no chairs for them to cozy up and let it all out.

Duran clams up, Leonard lets him off the hook, and without a interviewer/mediator or chairs to sit on, the meeting fizzles out. I think the photo below basically foretells how the face to face meeting goes in addition to how the fighters feel about the fight itself. 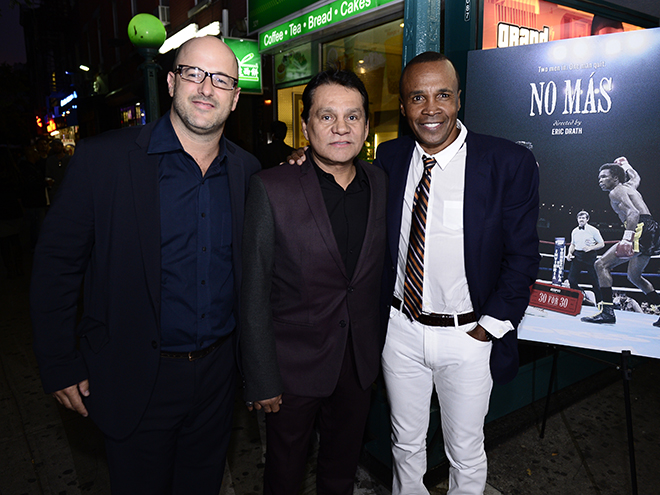 Maybe I was expecting too much or maybe I'm just too sensitive to unresolved question marks for any story. Part of me thinks that No Mas would be better served lopping off the final third and trying to cram the film into the 1 hour window like many other 30 for 30's.

All that said, No Mas does a masterful job retracing the leadup to the fight and the fight itself. It's interesting, paced well, and has historical footage that moves around with ease while covering a lot of ground. (Similar to Leonard….BOOM ANOTHER BOXING REFERENCE!)

Given that close to half of tonight's audience were not alive or weren't old enough to remember the famous No Mas fight, the film will go over a lot better than my review given it will be totally fresh to many. Overall, give a director like Drafth an iconic sporting event or storyline, he's going to get it right. Ultimately tonight's 30 for 30 is a tremendous retelling of Duran vs. Leonard II, but for those hoping for additional insight into that great story, unfortunately there is No Mas.

As always, please chime in the comments with your thoughts.