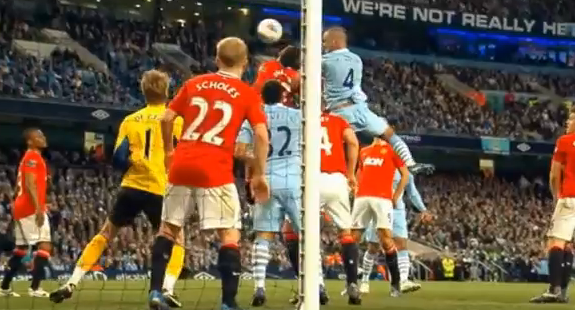 For the first time ever, all ten games from the final day of the English Premier League season will be broadcasted live in their entirety.  ESPN will have one game while Fox has released the network and online assignments for the other nine.  All games have a start time of 10 ET on Sunday May 13th.  The wider soccer fandom stateside has gravitated towards the EPL for several reasons – television coverage, quality of play, Americans playing in the league, and the recognizability of players and teams.  If you needed any more proof of soccer “making it” in this country, televising all 10 English Premier League games in a single week has to be it.

Televising live games across a variety of networks has been a fashionable trend with the success of the NCAA Tournament on CBS and Turner and the Stanley Cup Playoffs across NBC platforms.  However, Fox is taking it to the next level with Survival Sunday.  This year’s final day is the perfect storm for Fox and ESPN.  Not only is the EPL title up for grabs between Manchester City and Manchester United, but possibly two Champions League places are still undecided (depending on Chelsea’s result in this year’s CL final) as is the final relegation spot.

Below you’ll find all the match details and the ranking of all 10 games from 10-1 so you’ll know which games are worth keeping an eye on.  Here’s your Survival Sunday Guide…

Wolves have secured relegation since late April and have been at the bottom of the table for the last 9 games.  Wigan only cemented their safety Monday with a 1-0 win over Blackburn, continuing their improbable streak of escaping relegation thanks to manager and occasional ESPN analyst Roberto Martinez.  The only reason you should have for watching this game is convincing yourself MLS is somehow better than the EPL.

Norwich have been one of the surprises of the EPL season after winning back-to-back promotions and being pegged as a relegation favorite before the year began.  Aston Villa has been one of the disappointments of the season after finishing in the Top 6 three of the last four years.  With the mobile placement, this game isn’t likely to draw too many eyeballs.

Blackburn will exit the Premier League for the first time since 1999, clinching relegation on Monday (with a loose chicken and not a black cat seemingly dooming their fate).  Chelsea will have their eyes on next week’s Champions League Final with nothing left to play for in the league.  Then again, Chelsea could play their 7th stringers and still probably defeat Blackburn.

Like Norwich, Swansea have been a welcome addition after being promoted last year through the Championship Playoffs with their passing style earning praise.  Liverpool have had a roller coaster year brought down by a disastrous league campaign, their worst in over a decade (not to mention the ugly Suarez/Evra incident).  Even though LFC won their first trophy since 2006 in the League Cup and reached the FA Cup Final, that success has been overshadowed.  This should be one of the more open, attractive games on Survival Sunday and could be worth the occasional glance.

3rd-5th is separated by just 2 points in the table for the final Champions League spot(s).  Newcastle needs a win to force Tottenham and Arsenal to get a result.  They haven’t appeared in the CL since 2004.  Newcastle striker Papiss Cisse has been a star since his transfer, scoring 13 goals in 12 appearances.  USA GK Tim Howard and Everton also have something to play for though – with a win, they will achieve only their second EPL finish above rivals Liverpool.  This should definitely be one of the most competitve, better games on Sunday.

Like Newcastle, Tottenham will be looking for nothing but a win to earn a CL place as they host Fulham and Clint Dempsey.  Dempsey has scored 23 goals this year and is having one of the best ever seasons for an American in Europe.  Tottenham should be favored, but Fulham have won 4 of their last 6 and could match their best ever EPL finish with a win.

While the battle for Champions League spots are worth watching, there’s nothing quite like relegation drama.  Imagine the Cavaliers having to win their last regular season game on the road at Milwaukee to avoid dropping down to the D-League.  The pressure and the drama is extraordinary.  That’s the situation facing Bolton as they travel to one of the league’s toughest venues, Stoke City’s Britannia Stadium.  Only a win and a QPR loss gives Bolton a chance to stay up.  Bolton has two Americans in the squad (Stuart Holden and Tim Ream) and also may be a sentimental choice to save themselves with Fabrice Muamba making his way back to health.

Manchester United gave up control over the title race when they lost to Manchester City a couple weeks ago.  Although they sit tied on points, they are too far behind on goal difference to make it up barring a 10 goal victory.  (Hey, it could happen!)  Sunderland aren’t going to provide a huge amount of resistance, having failed to win in their last seven games.  This should be an easy win for Man U, so if Manchester City struggle at all vs QPR, this game will certainly be worth watching as the league title could hinge on this game.

Finally we reach 3rd place Arsenal.  A win secures them Champions League football next year while a tie could leave their fate entirely up to Chelsea.  The fighting Piers Morgans face a tricky trip to The Hawthorns where West Brom are having their best season since 1981 and are unbeaten in their last four games.  Arsenal have had such an up and down season they are as likely to win 4-0 as they are to lose 3-2.  Whatever the case, their game will be exciting, see last week’s 3-3 home draw with Norwich.  That’s why this fixture could produce the most memorable match on Sunday.

Unfortunately for Fox, they don’t have the rights to the one game with everything on the line.  Manchester City must win to clinch their first ever league title since 1968.  At the other end of the spectrum, QPR must win or draw to assure their place in the Premier League next year.  On paper, it should be little more than a coronation for Man City, who have won five in a row.  QPR are only in this position thanks to a Djibril Cisse late winner last week and still could remain in the EPL depending on what Bolton does.  Man City haven’t been in this position before and if QPR can keep them off the scoreboard and successfully park the bus, the pressure to get a winning goal could be too much to bear… and create some of the best drama of the year.