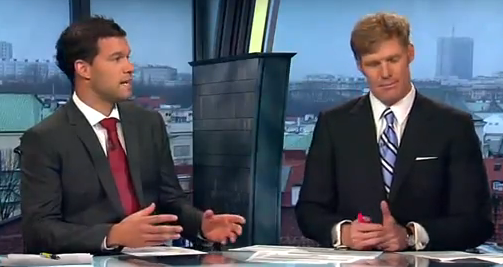 Spain won their third major soccer tournament in a row Sunday, defeating Italy 4-0 in the Euro 2012 Final with perhaps their most masterful display in the last four years. This Spanish side, champions of Euro 2008, the 2010 World Cup, and Euro 2012 is rightly being discussed amongst the greatest internationsl soccer teams of all-time. The rise of the Spanish national team has coincided with ESPN’s rise as an elite soccer broadcaster. Although the 2010 World Cup gets all the praise for ESPN’s relationship with the beautiful game, it was really born at Euro 2008. Four years later, ESPN has gone from Soccer for Dummies to Inverting the Pyramid.

1) Michael Ballack, the former German captain and next Bond villain, was the biggest new name ESPN brought in to cover the tournament as a studio analyst. To begin with, Ballack was as brutal as getting a Nigel de Jong karate kick to the chest. He struggled to produce coherent thoughts and instead spoke in sentence fragments. But, Ballack quickly became the most improved pundit of Euro 2012. Ballack never became as smooth vocally as his appearance indicated, but his analysis was more meaningful and interesting as the tournament went along and he appeared much more comfortable on camera. I wouldn’t mind if ESPN brought him back to Brazil in 2014 to reprise his role, if only for another month of Jason Bourne jokes.

2) Early in the tournament, while Ballack was still getting his sea legs, ESPN gave injured (American born) Italy striker Giuseppe Rossi a cameo in the studio for the first Italy-Spain game. Bad idea. I began to think he was either being held hostage, feared an angry mob of USA soccer fans were forming outside the studio, or he was there solely to make Ballack look better.

3) The banter between Alexi Lalas and Michael Ballack struck the right balance as the tournament went along. Lalas isn’t a fan favorite by any means, Ballack sometimes sounded like Emmitt Smith, but somehow this worked. There was that sense that the two must have hated each other because they disagreed on almost everything, but their discussions always seemed natural because they believed what they were saying. There were no shoutfests or grand proclamations that either made Xavi step up his game because of their criticism either. Here were two distinctly different people with different backgrounds giving their soccer opinions. This discussion on England’s 1-1 draw with France in the group stage was great – Lalas defending England’s pragmatic approach and Ballack saying it wasn’t the way to play football. It made the ESPN pre and post game shows worth sticking around for… in spite of whether you were a fan of either individual analyst.

4) The best individual in ESPN’s studio coverage wasn’t at Bristol HQ, but in Warsaw – Wigan Athletic manager Roberto Martinez. Martinez was one of ESPN’s bright lights in South Africa and his drop-ins from Poland were dynamite. Just watch Martinez break down the identity crisis the Netherlands faced playing two defensive midfielders on their way to a shocking early exit as an example of what he provides ESPN. From the sounds of Sunday’s sign-off, it looks like he’ll be back for the network in Brazil, which is definitely a welcome thing.

5) Finally in the studio, Bob Ley’s presence can’t be discounted. The man is an ESPN institution and perhaps the most respected on-air personality the leader has. As long as he’s front and center in ESPN’s soccer coverage, the network will be doing well.

6) In the booth, I was pleasantly surprised by the two Americans rotating as the third lead analyst – Taylor Twellman and Kasey Keller. Keller in particular stood out, but Twellman had his moments as well. Both are an upgrade for ESPN as they attempt to have some American presence in the booth calling games. It was good to have Derek Rae back as well, who called the Euro 2008 Final for ESPN and many years of the Champions League before that.

7) The second team of Adrian Healey and Robbie Mustoe won’t get much buzz or hype, but it was top notch. While Healey is the voice of ESPN’s MLS coverage, Mustoe usually works La Liga and other European games with him. Mustoe might be one of the least recognizable people walking through the ESPN cafeteria, but he was consistently the best game analyst of the tournament.

8) Ian Darke has entrenched himself since WC 2010 as one of America’s favorite play by play men and he continues at that high level. Although there wasn’t that signature moment like at the men’s & women’s World Cups of the last two years, Darke’s commentary was still sublime. His chemistry with broadcast partner Steve McManaman has also developed quite well after calling the EPL together. Macca has that easygoing air about him and is plenty likable, but if you can make one nitpicky point, he never really provides that killer analysis. It’s filled with simple cliches like “should’ve done better.”

9) The commitment to anything at ESPN can be seen in how much network synergy is given to that event. For the big international soccer events, the ESPN Synergizer goes into overdrive. We’re talking SportsCenter highlights and features, pre and post game shows, and discussions on shows where the hosts admittedly “aren’t soccer guys.” (NHL on Line 1.) On Sunday morning I was driving and even Freddie Coleman and Jonathan Coachman were talking about Spain’s place in the history books and the heroics of Mario Balotelli! You think that’s happening if Euro 2012 is on Fox Soccer? After Portugal lost to Spain in PKs with Cristiano Ronaldo not taking a kick in the shootout, it was the lead story on PTI that night. Coincidence?

10) For as much plaudits and praise as ESPN’s soccer coverage gets from the more hardcore fans like myself, its appeal is continuing to grow. Ratings were up 60% through the semifinals for the entire tournament. From an average of 745k viewers to 1.2 million. That’s a huge increase any way you slice it. So, it may be puzzling that the Final itself was slightly down from a 3.1 rating to a 3.0. However, there are a couple major reasons why – a move from broadcast to cable and major power outages in several big markets played a role. And, after Italy went down to 10 men in the second half down 2-0, the game was in effect finished. In spite of that, ESPN President John Skipper will be spraying champagne bottles to celebrate his soccer initiative taking more giant steps forward in viewership this summer.

11) And now for international soccer, the countdown begins to the 2014 World Cup in Brazil. The 2014 World Cup will be a dream for American fans because games will air in primetime. (Enjoy it before the nightmares that will be Russia and Qatar.) Rio is only one hour ahead of the Eastern time zone. Morning and afternoon games are nice, but primetime coverage will bring an unknowable boost to the event coverage stateside. Ratings will be monumental, especially if the US team can make a deep tournament run ala 2002.

It will be the end of an era for ESPN soccer as their last World Cup before Fox takes over the rights in 2018 and 2022. Brazil 2014 will be a fitting showcase if ESPN does in fact bow out of the international soccer game for a while. ESPN’s accomplishments in covering international soccer the last four years can’t be understated and Euro 2012 was another crown jewel. If Bristol covered everything with the intentionality, integrity, commitment, and excellence they do for international soccer, the network would be infinitely better across the board.