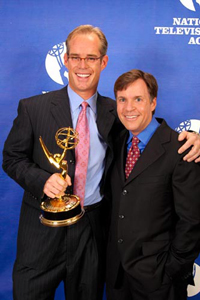 A recent tidbit in a lengthy Sports Business Journal article on sports media shed light on the highest paid announcers in sports.  Often, contract situations with announcers and other on-air personalities are kept tight-lipped.  Remember the pure shock last year at the announcement that Gus Johnson was leaving CBS?  None of the networks, nor the announcers comment on contract details, especially how much money is being dished out.  That’s why it’s such a big deal when details like this are mentioned publicly.  Naturally, the top earners at each network are of little surprise.  Al Michaels at NBC.  Jim Nantz at CBS.  Joe Buck at Fox.  But who is the top paid sports TV personality?  That answer may surprise you…

While no one could provide exact figures, multiple broadcast talent experts said that of the hundreds of people working in on-air sports jobs, there are a handful of on-air personalities who make the most money, and none is a former professional athlete. Four men stand above the crowd and are considered the highest-paid broadcasters in the U.S., these experts say: Bob Costas and Al Michaels at NBC, Joe Buck at Fox, and Jim Nantz at CBS. According to multiple sources, Costas, Michaels, Buck and Nantz each earns in the range of $5 million a year. Several sources said that of the four, Costas earns the most, as he works not only multiple major sporting events for NBC, but he also works for MLB Network.

I’m actually quite astonished Costas makes more than the triumvirate of Buck, Michaels, and Nantz.  What Costas does, he does amazingly well (except for those SNF halftime lectures), but he doesn’t really do much.  He hosts SNF and Triple Crown coverage along with special events (like the acclaimed Jerry Sandusky interview), but his TV time is relatively small.  Honestly, when was the last time Bob Costas did play by play coverage of a major nationally televised sporting event?  The 2000 NBA Finals?  I assume Costas makes the majority of his money as the face of the Olympics, which is where most of NBC’s money goes anyways.

As far as Buck, Michaels, and Nantz go, these are the immovable fixtures enthroned at the top of each network and they ain’t goin anywhere anytime soon.  These three announce most of the biggest events in sports – the Super Bowl, World Series, NCAA Tournament, Sunday Night Football, and The Masters to name a few.  But what about the next level of broadcasters?  SBJ also reveals who is in the second tier of the highest paid announcers…

After Costas, Michaels, Buck and Nantz, industry sources say there’s a steep drop-off in salary but still a definite pecking order. Chris Berman and Mike Tirico at ESPN, according to several agents, are considered the next-highest-paid network talent, with their salaries pegged at about $3 million a year. Agent Lou Oppenheim, who represents Berman, and Montag, who represents Tirico, would not comment. The top 10 game analysts would probably be next in a ranking of pay, agents said, followed then by second-tier play-by-play announcers.

Chris Berman must have a great life, getting paid millions of dollars to run out the same tired act after all these years.  ESPN might as well pay Gallagher to come on Countdown to smash a watermelon with a comedically oversized hammer.  Tirico does so much work for ESPN and serves as the voice of Monday Night Football, so it makes sense that he’d be only a step down from the top names.  When you think about it, Tirico is probably ESPN/ABC’s number one play by play man because of his versatility and the high profile gig of MNF.  Dan Shulman and Brent Musburger would likely follow close behind.

As far as guessing the top paid game analysts and peering into the AA crystal ball, Kirk Herbstreit and Cris Collinsworth would be at the top of my list.  Jon Gruden likely also gets a hefty salary from the leader as would Dickie V.  Charles Barkley should be taken good care of by Turner.  I’d imagine the rest of the top paid broadcasters in sports would largely break down through some sort of correlation between television time and ratings for that sport.  NFL announcers would be paid more than NHL announcers, for example.  Someone that works college football and basketball would be paid more than someone that only works NASCAR.  Unfortunately, unlike the sports they cover, it’s all guesswork with the salaries of sports media personalities.

So what would you do if you were starting a network?  Which announcers would you be willing to pay top bucks for?  Who are some of the likely better bargains amongst announcers today?  Comment it out and let us know what you think about the highest paid brodacsters in sports.