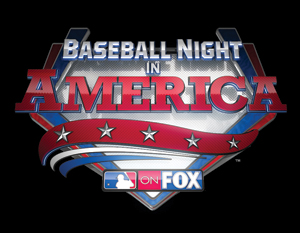 Fox aired the final edition of Baseball Night in America two Saturdays ago, after eight straight weeks of primetime baseball programming. The results for Fox were mixed, but largely positive. Four of the games received a rating over 2.0 and the other four ranged from between 1.7 to 1.9. Considering that Cops, a fixture in the 8 PM Saturday slot before this summer, routinely drew ratings around 1.0, the experiment easily resulted in almost double the ratings for Fox.

However, there is a caveat to Fox's ratings spike this summer. Of the three primetime games that aired last year, their ratings were all huge, ranging from 2.4 to 2.8. Only two games this year cracked that 2.4 mark this year: the Yankees-Mets matchup on June 23rd and the Red Sox-Yankees matchup on July 7th. Like it or not baseball fans, the Yankees are a fixture in primetime because they continue to draw massive ratings. We can complain all we want about being force-fed Yankees baseball, but they draw. It's as simple as that.

Last year's featured primetime games were Red Sox-Yankees, Mets-Yankees (again), and Cardinals-Rockies (in a bizarre week that featured no game getting to 25% of the country). Are you seeing a pattern here? The Yankees are prominently involved in four of the top five primetime matchups, and the other games are languishing with mediocre numbers overall.

I doubt that Fox will go in another direction next season. In fact, I wouldn't be at all surprised to see Fox expand their primetime coverage, working around their UFC, NASCAR, and Pac-12 contracts. Fox has committed to sports on Saturday nights this year, so it's logical to expect it to continue into next year with solid ratings.

Now, like any network experiment, there is plenty of room for improvement. How could Fox improve the primetime experience? Simple: restrict the primetime games like their afternoon selection. Look at this year's MLB on Fox schedule. Notice how for all of the afternoon games, there are normally just three games selected. That's only three games that are blacked out by the MLB cabal, which isn't an awful deal at all. Now, look at the primetime games in the heart of the schedule. With the exception of the final week of games, all of the weeks featured either five or six games, knocking out a third or more of the league's teams as opposed to normally just about 20%.

If Fox limited their pick of primetime games to three, and shuffled the rest of the day's games to starting either in daylight on the east coast or primetime in the west coast (which is outside of the blackout window), there would be fewer fans being affected by blackouts, and less baseball fans would be irritated. And to avoid cries of east coast bias, why not feature one game with a home team in each division? An eastern division game could start at 7 local time, a central division game would be at 6 or so, and a west coast game would start at 4 local time. Then, the rest of the league could start between 1 and 4 PM local time, not get effected by local blackouts, and that would take care of that problem.

I highly doubt blackouts are going away. At the same time, calls to allow fans to watch all games online are growing. Fox limiting the amount of games they'd black out would at least ease some of those concerns, and let them keep their lucrative primetime baseball ratings bonanza. It might not be win-win, but quite frankly, it's the best that fans are going to be getting.