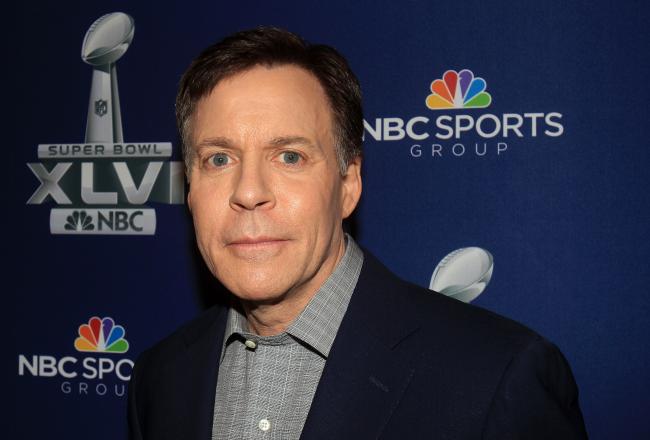 The halftime essays of Bob Costas on Sunday Night Football are usually little more than an excuse for NBC's prized sportscaster to get some face time and give a lecture to the largest primetime audience in America.  The essays are as forced and unnecessary as Chris Berman's Two Minute Drill, although the two segments couldn't be further apart in their mission.

Given the much-talked about responses of the NFL pregame shows to the Jovan Belcher tragedy, I wondered if NBC would give Costas free reign to give an opinion on the story with his halftime essay, whether it would be avoided completely, or handled carefully.

As it turns out, not only did Costas use his halftime essay to comment on the events in Kansas City, he used the moment to provide his thoughts on the gun culture in America.  He even quoted Jason Whitlock (yes, that Jason Whitlock) to cement his point in a polarizing commentary.  Here's the video evidence and transcript…

Costas: You knew it was coming. In the aftermath of the nearly unfathomable events in Kansas City, that most mindless of sports clichés was heard yet again, ‘Something like this really puts it all in perspective.’ Well if so, that sort of perspective has a very short shelf life since we will inevitably hear about the perspective we have supposedly again regained the next time ugly reality intrudes upon our games. Please.

Those who need tragedies to continually recalibrate their sense of proportion about sports, would seem to have little hope of ever truly achieving perspective. You want some actual perspective on this? Well a bit of it comes from the Kansas City-based writer Jason Whitlock, with whom I do not always agree, but, who today, said it so well that we may as well just quote or paraphrase from the end of his article. "Our current gun culture," Whitlock wrote, “ensures that more and more domestic disputes will end in the ultimate tragedy, and that more convenience store confrontations over loud music coming from a car will leave more teenage boys bloodied and dead. Handguns do not enhance our safety. They exacerbate our flaws, tempt us to escalate arguments, and bait us into embracing confrontation rather than avoiding it. In the coming days, Jovan Belcher's actions, (and its possible connection to football), will be analyzed. Who knows? But here, (wrote Jason Whitlock) is what I believe, If Jovan Belcher didn't possess a gun, he and Kasandra Perkins would both be alive today.”

The reaction to Costas' essay was as widespread and inflamed as you would expect.  Costas dove right in to one of the most hotly contested political issues in America with a halftime essay at a football game.  We're not talking about the epidemic of touchdown celebrations or Peyton Manning's comeback anymore.

(Before the comment thread turns into Politico, I know this sounds crazy, but there are decent people on both sides and this issue is more complex than 93 seconds of commentary. This is in spite of everyone telling you everyone on the other side is a nut, a wing nut, or a nutjob.  Jason Whitlock, the same sportswriter Costas quoted, baiting "gun nuts" on his Twitter account probably isn't helpful for anyone hoping to advance the conversation.  There are those who will say weighty issues like gun control have no place in a sports enviornment.  There are others who will say the conversation won't truly be advanced until these issues intersect with sports and real life.  Both sides have compelling points to their positions.)

Nuance is a lost art in this day and age, but it needs to be applied in this case.  I agree wholeheartedly with both Costas and Whitlock on the inherent, serious problem regarding the gun culture in this country.  I also think it's extraordinarily presumptive to say, "If Jovan Belcher didn't possess a gun, he and Kasandra Perkins would both be alive today" as if either individual is the authority on the lives that were lost.

Regardless of the topic, the larger point is that Costas' editorializing needs to be saved for a more fitting platform like Costas Tonight or Rock Center.  The halftime essays have been out of place on SNF since their inception, this week notwithstanding.