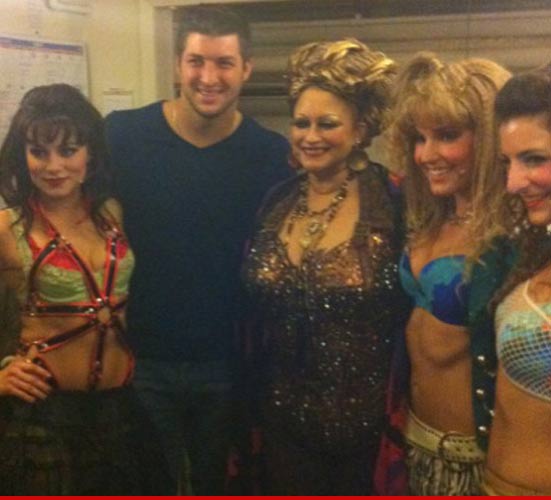 In the world of reality outside the First Take studios, it’s been relatively quiet on the TebowMania front over the last couple months… as it should be… hello, it’s the offseason.  But since this is Tim Tebow we’re talking about, you never really can escape.  Surfing the web you’ll see mundane Tebow stories about him changing his dog’s name, or Tebowing in Madden 13, or Tebow already winning over his teammates, yada yada yada.

There was one Tebow story though that actually did make me pause and consider it as semi-interesting.  It was this TMZ report about Tebow’s people requesting this backstage Twitpic with members of Broadway’s Rock of Ages cast be taken down to protect his image…

Neka Zang, one of the Broadway stars who tweeted the picture later explained why she had to delete it.  “Well, Due to Tebow’s “image” I was asked to remove the pic of him with us half dressed ladies. He does know we arn’t real strippers right?”

I know there is a sizable portion of the population that is beating their heads against their desks thinking this passes as news, but there is an underlying impact here beyond it being just another Tebow story that’s a waste of time.

Tim Tebow and whoever his handlers/PR team/image control freaks are need to step off the gas in terms of protecting Tebow.  One of the most difficult things about all that is Tebow is separating Tim Tebow the human being from the force of nature that is TebowMania.  I’m as annoyed as anyone at the Tebow oversaturation, but I like what he stands for and who he is, and can separate the two in my mind.

One of the strengths of Tebow’s appeal to a lot of people is his relatability and connection with people.  That’s why he and his message resonates with so many.  If Tebow’s handlers begin demanding innocent pictures be taken down from the internet or start issuing cease and desist demands over t-shirts that don’t even have his name on it, then there begins to be a disconnect.  Tebow becomes just another athlete removed from reality, hiding behind a group of handlers, and looking down upon everyone else.  The realness of Tebow dissipates and you begin to wonder whether he’s as genuine as he really says he is, or if he’s just a careful PR creation.  If Tebow’s handlers become a major part of Tebow’s story moving forward, they will do infinitely more damage to his image than they ever could save by acting to protect it.