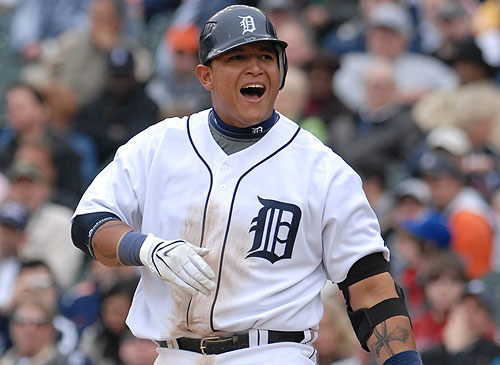 Per Sports Business Daily, the MLB local ratings are in, and you might be surprised by what you are seeing. The 2012 leader in average rating, the Detroit Tigers, clearly benefited from Miggy Cabrera's triple-crown chase, as well as their home town team coming back and overtaking the Chicago White Sox to win the AL Central Division title. They averaged a 9.13 rating this season, which is a gigantic 42% increase from 2011. On top of leading baseball in average rating, they were also ranked fifth in viewer increase from last season.

The second ranked team with a 8.64 rating is the Reds, a solid 15% increase from last season. It's only their second playoff appearance since 1995, and clearly having one of the best teams in the NL will draw viewers; regardless of which market the team is in. The always strongly-rated Cardinals came in third place with a 7.68 average rating, which is not to be surprised. They've had a superb following for decades.  However, it does represent a 13.5% decline from last year's 2011 championship season.  But for MLB as a whole, ratings have dropped 6% so far this season, so a 13.5% decline for the Cardinals is not the end of the world by any means.

The Nationals, whom are in a race against the Reds for the best record in the NL, came in with the highest ratings increase since last season at an epically amazing 74%! They have Baseball Jesus and a very good young team, but I am not sure how many people could have predicted this prior to the season. On top of that, they look like they could be a legit World Series contender. The LA Dodgers and rapidly sinking Texas Rangers round out the top 3 in ratings increase since last season, at 70% and 51%, respectively.

You might be asking yourself, "where the heck are the New York Yankees on any of these lists" and that's a pertinent question to ask, as they have by far the largest audience size with almost 300,000 viewers. That's an insane amount, which dwarfs the second place New York Mets by over 100,000 people! And it's not like they are a bad team this year, as they have been in a pennant race (which they won last night) with the Baltimore Orioles for a few weeks now. Regardless, it's the lowest ratings for the Yanks in years. And speaking of the Baltimore Orioles, they had a healthy ratings increase of 42.2%, just behind their Washington neighbors, but still a strong number.

On the flip side, the Houston Astros are bringing up the rear with only a 1.02 rating, MLB's lowest TV rating since 2008. This also happens to be a pretty large 32% decline from last season, when the Astros were also mind-numbingly terrible. At least the Texans are undefeated though! The biggest year to year drop came from the Philadelphia Phillies, who missed the playoffs this year for the first time since 2006.

Lastly, I honestly don't understand how the LA Angels and the Oakland A's are the bottom two and three teams in all of MLB,when it comes to local ratings this season. Both teams have been solid contenders in the AL West and the A's may be the story of the season.  Look at the additions the Angels made this off-season. And who the heck doesn't want to watch Albert Pujols and Mike Trout work their magic? Trout had one of the best seasons EVER. Not the best rookie season, but quite literally one of  the best seasons in baseball history. The fact that these two squads are in the bottom two is simply mind-boggling. Ratings of 1.12 and 1.27 are cringe-worthy for squads that have been on the cusp of the playoffs for well over a month now.  If my Minnesota Twins were playing even 50% as well as either of these teams, I can guarantee you I would have watched more than 2 games this season.