The Sarah Phillips story fascinated me.  I’ve never before seen anything like it.  Tuesday, Deadspin broke a story that ESPN’s young columnist may be behind several internet scams amidst other incredibly mysterious activity.  Almost immediately, ESPN terminated its relationship with the columnist that rose from message boards on a gambling site to writing for the biggest sports network in the world.  The activity surrounding Phillips is like the Wild West of the internet with a few people telling stories of also being conned by Phillips.  But then, the story got much weirder… and much more interesting.

The connection was made by Deadspin from Sarah Phillips (@SarahPhilli) to a popular Willy Wonka parody account, Condescending Wonka (@OhWonka) after a reader tip that the two accounts had briefly sent out the same tweet before they were deleted.  As if this all wasn’t crazy enough, Not Bill Walton (@NotBillWalton) entered the fray with Direct Messages from both Phillips and Wonka saying that she controlled both accounts.  The key screengrab is this DM from Wonka to Walton purporting to be Phillips:

Suddenly, former ESPN columnist Sarah Phillips was now connected to one of Twitter’s largest parody feeds.  At this point, I became totally enthralled in the mystery.  This was now a story that was going way beyond ESPN.  I was so fascinated in the mystery of this former ESPN columnist that I investigated the situation to see if any other leads appeared.  What I discovered was a Twitter web whose full implications are still untangling.  Here’s the results…

First, to understand what is happening here, let’s meet the major players:

First, 9 and GirlsGoneKyle are connected.  Both claim some ownership of the Wonka and Wolfpack parody accounts.  The relationship between the two is seen in this tweet from April 8th.

Both appear to be entrepreneurs of some kind with a focus on parody Twitter accounts.  Both Facebook pages for @9 and @GirlsGoneKyle speak of making money and business.  Interestingly, Cameron liked NBA Memes, the Facebook site in question through the original Deadspin article, on Sunday.

Believe it or not, parody Twitter accounts can be a big business.  Wonka has almost 800k followers and Wolfpack over 500k.  Those are huge audiences.  The web of parody accounts extends to younger feeds like Conspiracy Keanu (@WhatIfMeme) and Shit Nobody Says (@_ShitNobodySays).  That connection is evidenced below.  @9 follows only five people and has tweeted just 26 times.  Four of those accounts are each of the parodies listed above: 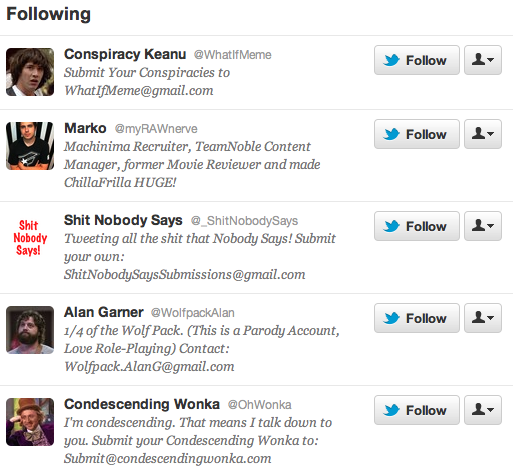 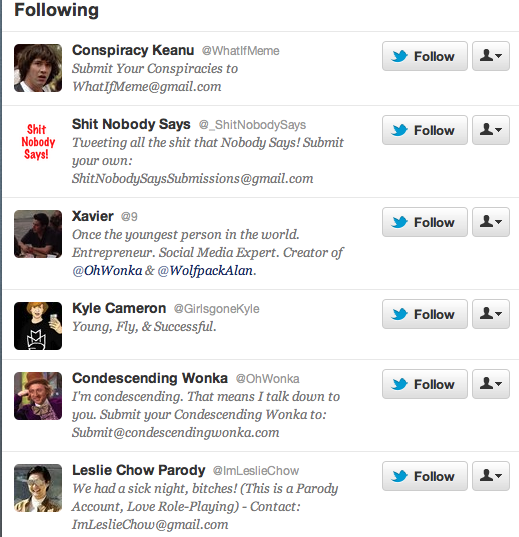 The connection is seen again in the fact that @WolfpackAlan retweeted a few of @WhatifMeme’s tweets to kickstart the account:

So how does Sarah Phillips fit in to this empire of parody Twitter accounts?  On April 29th, @GirlsGoneKyle tweeted that he had given up the @OhWonka account, which now becomes the key to the story.  Yes, a fake Willy Wonka account is the key cog in a story about a fired ESPN columnist.  Welcome to 2012.

The next day, on April 30th, the @OhWonka account began mysteriously pumping the Sarah Phillips Twitter account relentlessly.  The tweets have since been deleted, but were preserved by another Wonka parody account, @NoAdWonka, which copied the tweets from @OhWonka.  We’re into second layers of Willy Wonka parody accounts.  This is Inception level intrigue.  Those preserved tweets show no less than 12 mentions of Phillips since April 29th, the day when Kyle Cameron said he no longer owned @OhWonka. 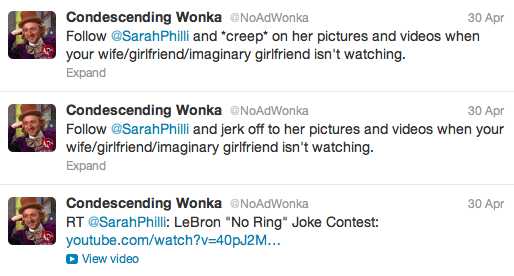 This evidence also matches up with the DM from @NotBillWalton from 2 days ago from Sarah Phillips on the Wonka account.  Importantly, Wonka also promoted the site at the center of the scam, Sports Comedy Net.  As @OhWonka was incessantly tweeting messages for Sarah Phillips, this tweet also emerged from a previously unrelated @SullyPwnz linking Phillips, Wonka, and @GirlsGoneKyle:

Then an interesting thing happened.  @GirlsGoneKyle tweeted AA about what happened with Phillips and @OhWonka.  Here’s what we learned from @GirlsGoneKyle…

The middle tweet was preserved thanks to one of our followers using TMI.me to retweet what had been sent to us by GirlsGoneKyle.  All tweets from GirlsGoneKyle to Awful Announcing have since been deleted by Cameron and are saved via these screengrabs.  I’m no legal expert, but surely the idea of giving Phillips and her group of people a fake contract for equity in a fake company is something that raises eyebrows.

Finally, well into the early hours of the morning on Wednesday, @OhWonka sent out this tweet claiming it was back in the hands of its original owners, @9, @GirlsGoneKyle, and a third man, @NotBranden claiming it was stolen, presumably by Phillips…

@NotBranden also tells Deadspin he has a role in the Sarah Phillips saga and is coincidentally the man behind another huge parody account, @YourFavWhiteGuy, with over 300k followers.

As of 2:30 AM ET Wednesday morning, that’s where my trail ended… for now.  Deadspin has promised more in the morning and surely more tweets and investigative reporting are on the way.  As for a summary, here’s what we know at the moment:

1) Sarah Phillips was fired from ESPN for her questionable behavior and being at the center of several internet scams and questionable dealings.  She, and possibly multiple people on her behalf are involved.

2) One of those questionable dealings involved a hugely popular fake Willy Wonka Twitter page, which itself was part of a larger empire of parody accounts on Twitter.

3) The Wonka page appears to have come into Phillips’ possession on April 29th and was reclaimed by @9, @GirlsGoneKyle, and @NotBranden on May 2nd.

4) Most all of the major parody accounts on Twitter are somehow related to one another.

5) The mystery of Sarah Phillips is just starting to unravel.

UPDATE 8:15 AM ET: Xavier (@9) provided this link to his Tumblr where he explains more of the story on how Sarah Phillips and her business partner became involved with @OhWonka:

“It all start several weeks ago when I received an email from a Sarah Phillips, telling me she worked for ESPN, and how they wanted to start a sport/comedy section and they’re interested in me working on it. A few weeks later we got talking, and she told me how ESPN were interested in purchasing sports account. She told me I’d get VIP treatment to NBA, NFL games ect. Her working for ESPN and all, I believed it. She told me about a new “Sports Comedy Network” that may be interested in @OhWonka..”

“Thankfully, Deadspin published the article and before I got too deep into anything, everything was sorted. Her business partner gave back full access to the account. This is just the surface of the real story, I won’t tell the full story because if I did, your brain would literally explode. Feel free to ask me any questions and I’ll be happy to clear up most of them.”

Again, another example where Phillips and her partner used her association with ESPN to try to get pepole involved in the questionable sport/comedy venture. We’ve also learned that Phillips and Prasad were apparently high school classmates.

UPDATE 2 10:15 PM ET: Xavier (@9) posted another update to his Tumblr chronicling screenshots from a conversation with Sarah Phillips from April 29th, the day she acquired the @OhWonka account.  You can check all the correspondence at the link, but the highlights include more fantastical claims about her ESPN connections and resources and the Sports Comedy Network website:

“If you guys could create a sports comedy account with a decent-sized following, we’ll pay a monthly fee to “use” the account – essentially joint ownership.”

“We’ll use our ESPN resources to build the account.”

“Donald Trump Jr. is one of his investors, he’s a good guy.”

“The company I could have had stake in is now part of ESPN, called ‘Playbook’… it’s worth $13.7 million.”

“ESPN is interested in adding a sports comedy section.  It’s called Sports Comedy Network LLC.  They’re creating a website now.  I believe his early goal is $1.2 million in revenue for the year.”