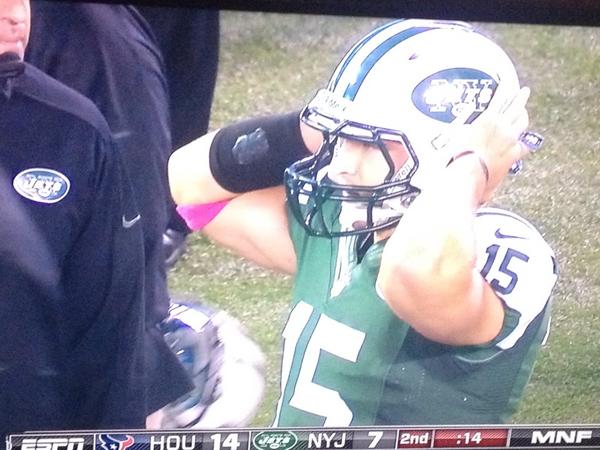 Last night's Texans-Jets game wasn't just an opportunity for the country to see the NFL's best team in the national spotlight.  (That would be the Texans in case you were wondering.)  No.  Naturally, with the New York Jets involved, it was an opportunity to revisit TebowMania.

Shockingly, ESPN was realtively reserved yesterday compared to their summer when SportsCenter covered Tim Tebow like the state controlled media of North Korea covered supreme leader Kim Jong-Il.  The most over-the-top Tebowcentric item to emerge from Bristol was… wait for it… a Skip Bayless column devoted to his history with Tim Tebow.  I would link to it, but I can't put that on my conscious.

As far as the game broadcast, how was Tebow covered?  How many times was he mentioned and squeezed into the broadcast?  Find out after the jump.

-There were 7 Tebow mentions in the pregame alone including Jon Gruden excitedly running down all the places you'd see Tebow in the game ("You might even see Tim Tebow play quarterback tonight!") and an entire Lisa Salters segment about Mark Sanchez looking over his shoulder at Tebow, who was "waiting in the wings."  The above shot picturing Tebow after a Sanchez INT must be what Mark sees when he looks over his shoulder.

-For the record, there was plenty of Gruden praise to go around.  After Sanchez threw a 1st Quarter TD, Gruden opined, ""A great quarterback brings out the best of whoever he plays with."  Indeed, no wonder Chaz Schilens is having such a great year.

-After a 2nd Quarter handoff when Tebow was actually on the field, Brian Cushing got hurt, perhaps tearing his ACL.  Fans could be heard booing in the background, so Mike Tirico had to note it was Tebow-related.  "Fans are booing as Sanchez comes back on the field and Tebow comes off, not necessarily because Cushing is down and hurt."  Thank goodness that was clarified, or else Eric Winston was going to New York and take care of business himself.

-Tebow wasn't mentioned for the first ten minutes of the 3rd Quarter, which meant ESPN had to remind viewers they weren't getting the Tebow they were hoping for.  Tirico: "All you people clamoring to see Tim Tebow, 4 snaps so far of Tim Tebow of the Jets 37 plays."

Cue the sad music on the world's smallest violin.

-Again during the 4th Quarter, Tirico reminded us that Tebow's last snap came all the way back in the 2nd Quarter and only had 4 snaps for the game.  Finally, with the Jets driving for a score, Tebow ran for a first down in the red zone as the stadium and the booth exploded with Gruden wanting to see more.  "I've been waitin all night for this Tim Tebow!  A little read option, give it to him again!  I love it!  This ought to be the best plus 10 red zone quarterback in football!"

-The last Tebow mentions came with the Jets on their own 9 for the last play of the game.  Somewhat half jokingly (please Lord), Tirico announced, "Tebow should be on the field, Tebow's not out there.  I would put Tebow out there, he's the best option quarterback throwing it across the field."

-All totalled, Tebow elicited 30 mentions for his 8 on-field plays and an impressive 20 mentions for just being inside the stadium.  Combined with the 7 pregame mentions that leads to a grand total of 57 Tebow mentions last night.  There were also several iso shots on the sidelines of Tebow huddling with Mark Sanchez, throwing passes, and hanging out in the background.  And, viewers were kept up to date with Tebow's impressive stats on the bottom line.  Yes Tebow had an incompletion, but it wasn't his fault!! 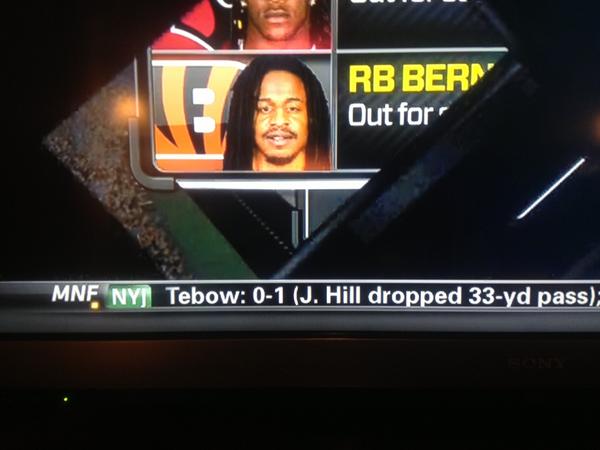 Considering the network televising the game and the circus potential, those of you who bet the under probably had a good night.  57 mentions is a ton for a backup quarterback playing 8 snaps, but a low number for Tim Tebow.  If the game had been a blowout, it would likely have been much higher.  Thankfully, those of you playing a Tebow drinking game hopefully survived the evening.  And, our research staff is still compiling the number of mentions for Texans backup T.J. Yates.

On the bright side though, it took an eternity to mention Tebow's name in the SportsCenter postgame.  A whopping 3:28.  I'll consider that progress.