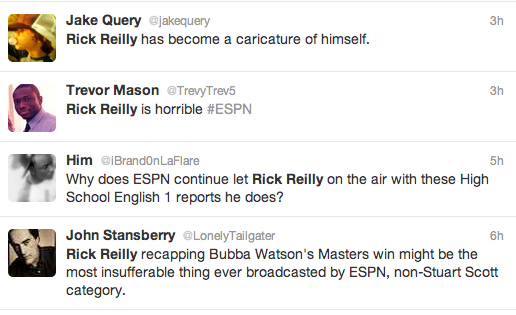 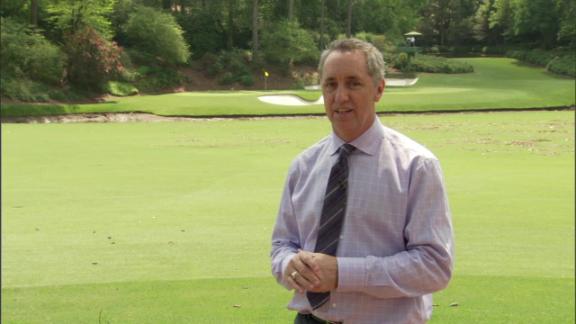 I am going to go out on a limb and guess I’m not the only one who feels suffocated after an extended weekend of Rick Reilly being featured on ESPN. Actually a quick Twitter search shows I am not alone.

In my never ending quest to make a stupid analogy for everything in sports media, it’s clear to me that Rick Reilly is that dreaded uncle who you know is going to pester you thinking that he’s funny. People encourage him. They shouldn’t. Shouldn’t someone be elbowing him or kicking him under the table?

ESPN has done a good job picking and choosing when to let the talent acquisition abomination of the decade out from the dark corner he operates in. But The Masters is unfortunately that annual event you KNOW he’s going to be there. He’s going to be there alright. Dressed up, yucking it up, having a ball, and totally oblivious that everyone there wants him to can it.

You look forward to The Masters just like a fun family reunion but dread… literally dread the moments you may have to be stuck nodding along listening to Reilly.

It’s all canned. It’s shtick. It’s some terrible mutant creation of a failed comedian, a failed salesman, combined with a mediocre journalist. He pinches your cheek, tells cliche stories, and makes jokes that only leave you keenly aware of how little time we have on Earth and that you’re wasting precious seconds listening to this guy just blabber about god knows what. He’s family, and it’s only once in awhile, but I was never consulted about his inclusion to the clan and I just don’t know how much more I can take biting my tongue.

At a family event you can fake needing another drink or needing to go to the bathroom in hopes he’ll latch on elsewhere. This is where I excel most in life.

On ESPN, yes you can change the channel, but there are certain times as a viewer you’ve just thrown the anchor down and you’re too lazy or invested in flipping away fearing you might miss something that everyone will be talking about tomorrow.

“Did you see that Blake Griffin dunk yesterday?”

“No, I started watching Khloe and Lamar because Rick Reilly made me tap out from watching ESPN.”

I can stomach a lot of the personalities that drive people crazy in sports media. Most of them are not too hard to avoid or tune out. However as the years have gone by, my predisposition to being tormented by random slices of Reilly has only worsened. If only he could be quarantined away from the masses.

With Rick Reilly’s deal winding down and ESPN/Reilly public sentiment nearing SOPA status, I’m hoping that by next Masters I can take in the great annual event without dreading and navigating ESPN’s featuring of Reilly.