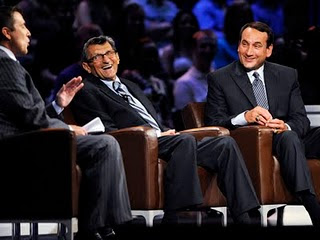 The Penn State scandal has certainly been one of the biggest sports stories in a generation.  The absolute tragedy of the crimes committed, the criminal activity of those in power, and the tarnishing of a legendary sports figure and football program are just a few of the aspects to this story that have been covered by the sports media and media at large.  And now that the NCAA has handed down its crippling penalties to Penn State, there's another chapter to the story that will continue to unfold for years to come.

"The fundamental message here, the gut-check message is, do we have the right balance in our culture? Do we have, first and foremost, the academic values of integrity and honesty and responsibility as the drivers of our university? Or are we in a position where hero worship and winning at all costs has subordinated those core values?"
-Mark Emmert, NCAA President

"For next several years PSU can focus on rebuilding its athletic culture, not worrying about whether it’s going to a bowl game."
-Mark Emmert, NCAA President

Certainly though, Penn State's football culture didn't devolve on its own.  While the NCAA would like to hand out punishment and act like the grownup in the room for once, they and their member institutions are responsible for this current athletic culture.  Likewise, the sports media will spend the next several days sanctimoniously nodding their heads in approval of the NCAA's sanctions while they (and ever more extreme fan bases) are just as responsible in creating, exploiting, and enabling the "win at all costs" football culture that Emmert denounced yesterday.

Let's revisit one of the more bizzare things said during the course of the last several weeks, from Red Sox advisor Bill James.  For some inexplicable reason, James tried to make the case that Penn St. head coach Joe Paterno should not be held accountable for the coverup that allowed Jerry Sandusky to continue his monstrous abuse of children.  That is, of course, before the Red Sox told James to kindly stop his nonsensical ramblings, which included an embarrassing appearance on Doug Gottleib's radio show.

Lost amidst James' controversial remarks though was a key point of contention regarding who is and was to blame for enabling Sandusky's criminal behavior within the Penn State football culture.  Here's the key quote from James:

"The people who are responsible for it are the media,” James said on ESPN Radio’s “The Doug Gottlieb Show.” “The media created this smokescreen behind which Sandusky operated and then they’re trying to blame Paterno for the fact that they were covering up for Sandusky.”

James is referring to Sandusky's reputation in the media prior to the terrible truth being revealed, such as this 1999 profile in Sports Illustrated upon his retirement.

Of course, James' comments to blame the media are troublingly simplistic, but it does bring to the front an important question and consideration regarding the media's role in the creation of the pristine image of Joe Paterno and Penn State football.  Nevertheless, this is a question not just for the media to consider, but for the entire culture of college football as well.  Is the "smokescreen" James referenced actually the culture created by Joe Paterno, fans, and media alike at Penn State?

Stop for a moment and consider how college football has been elevated in this country to a place each Saturday where games are promoted as a "showdown" or a "statement" or a battle between eternal foes. The life-and-death nature of college football has been around as long as the sport itself.  In fact, in its infancy, the sport was a matter of life and death, which is why the game was almost banned under President Theodore Roosevelt.  Since then countless figures like Rockne, Bo, Woody, Bryant, and yes, Paterno have been elevated on an untouchable pedastal with fans all too willing to fall prostrate worship at their feet.  Countless rivalries have become unholy wars fought each year between 19 and 20 year old kids.  It is the #2 sport in America behind the NFL.  And yet they still call it college football.

But in recent years, it's like a flip has been switched to make everything about college football's culture so much more meaningful, so much more personal, so much more lucrative, and so much more polarizing than it already has been.  ESPN's Kirk Herbstreit was literally run out of Columbus by the fringe 2% of Ohio State fans.  Entities like the corrupt bowl system continue to generate millions upon millions of dollars while student-athletes are punished for trying to reap the meager benefits of their work.

Events surrounding the Alabama-Auburn rivalry, for example, have tested both the common sense and decency of media and fans in recent years.  Many remember the insensitive writings by one ESPN.com author who, after the death of 'Bama OL Aaron Douglas, immediately began pondering how the young man's death would effect the Crimson Tide's depth chart.  What does it say about the lust of media towards college football where tragedy can be immediately turned into something so hollow and meaningless as playing time?  And of course, there was the Toomer's Corner poisioning by a deranged Alabama fan that showed how far some were willing to go in the name of rivalry.

In many ways, the media acts explicitly and implicitly to fan these flames.  Rivalry games are given larger-than-life meaning.  Collegiate coaches are turned into God-like figures merely for their ability to win games while building "fine young men."  Of course, the phenomenon of building "fine young men" is not exclusive to collegiate athletics, but that hasn't stopped these mortal men from being granted immortal status.  Why, we are a little over a year removed from the ESPN special "Difference Makers: LIfe Lessons from Paterno & Krzyzewski."  In some places – you win a championship, you get a statue as if coaches are golden calves deserving of worship.

Jay Bilas and others have mentioned that Penn State was a prime example of "total control" by a football program over the university instead of a "lack of institutional control."  Just how did Joe Paterno get complete autonomy at PSU, where other administrators and even the president of the school were expected to bow at the feet of a football coach?  Jerry Sandusky operated for so many years in the shadows because of an environment at Penn State where the well-being of young children was less important than the reputation of a football program.  And it was that same warped view of reality that required a coverup by Paterno, Spanier, Curley, and Schultz.

Certainly, the underlying theme in each recent NCAA scandal – from something as trivial as tattoos, to something as dishonest as academic fraud, to the horrible crimes of child abuse – was the insatiable need for these programs, administrators and coaches to succeed and profit on and off the field to satisfy the football culture that has been created by schools, media, and fans.

And while the NCAA may finally be serious about enforcement and cleaning up college athletics with their actions towards Penn State, they are no white knight.  The organization only pulls out words like "values" and "responsibiity" when it suits their own self-serving interests. It is still one of the most hypocritical entities in sport, right along with FIFA and the IOC.

Just take a minute and research the Ed O'Bannon lawsuit brought up by Dan Wetzel on our latest podcast.  While NCAA President Mark Emmert talks about the evils of a football program overtaking a university at Penn State, its FBS Championship Game will be sold to the highest bidder.  It has continued to stand on the sidelines while universities and conferences pillaged each other in the name of the almighty dollar.  Does one positive action by Emmert undo years of incompetence or guarantee the NCAA will act accordingly in the future? Hardly.  Emmert's silence on old pal Graham Spanier was telling.

Undoubtedly, the unprecedented situation at Penn State leaves the NCAA and the culture of college football at a crossroads with many questions left to be answered.

Will the NCAA continue to take the steps necessary to change the "win at all costs" mentality of big-time college athletics?  Or is it more likely that Emmert's commitment to culture change and keeping the mission of a university in proper perspective fades away into the ether of the college football machine?

Will college administrators remove the power from autonomous coaches and remember the first goal of higher eduction is to… educate?  Or, is it more likely universities and their leaders continue to use "student-athletes" as a vehicle to obtain more wealth, glory, and power?

And what will the media do?  Will they investigate the NCAA and its universities more thoroughly?  Will they show some reserve and healthy skepticism in deifying programs and coaches?  Will they hold Emmert's plea for culture change to a wider and higher standard?  Or, is it more likely the same vicious cycle of scandal and sanctimony continues ad infinitum because college football is just too good for business?

WIll we all continue to partake and promote these false religious experiences held every Saturday in the largest outdoor churches in the world just to seek fleeting victories on the gridiron?

Make no mistake, what happened at Penn State can happen anywhere when powerful individuals abuse their absolute power.  Scandal driven by power and money is not unique to college football.  However, the calls for culture change at Penn State must be applied to the rest of collegiate athletics as a whole in order for it to mean something in the years to come.  I hope this current culture of college football that has been exploited by the NCAA and universities, enabled by the media, and embraced by fans across the country comes back to reality some day in the not too distant future, so that the sins of the past won't be repeated.