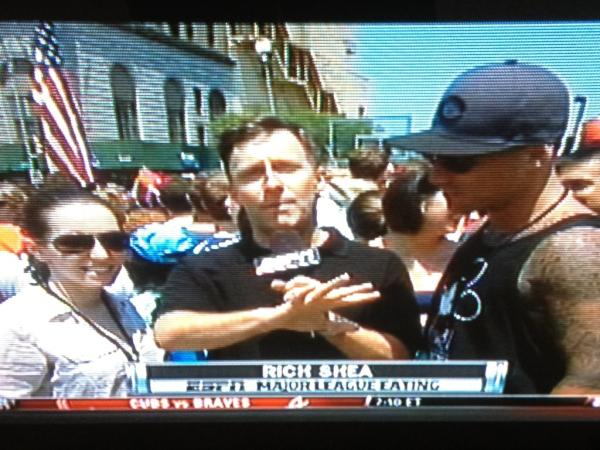 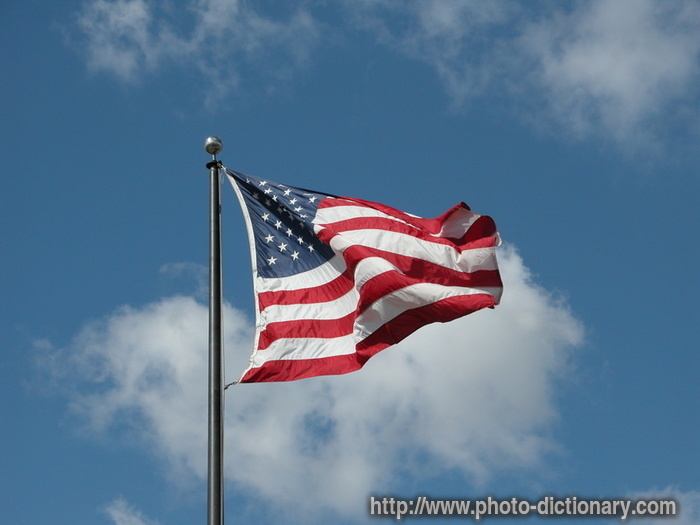 The Nathan’s Famous Hot Dog Eating Contest from Coney Island has quickly become the sporting crown jewel of the 4th of July.  Eat your heart out, Bud Selig.  Yes, nothing quite says Americana like grown men and women stuffing as many hot dogs down their gullet as humanly possible in front of cheering fans.  Last year we took a look at all the most insane and insanely funny quotes from the epicenter of eating, but that just doesn’t seem adequate enough to pay tribute to one of the interesting hours of sports television of the year.  So, with a tip of the cap to the Sports Guy, this year we’re going into full retro diary mode.  Enter if you dare… and if you’re on an empty stomach…

3:01 – After the intro package, Paul Page welcomes us to beautiful Coney Island.  At this point, before we delve into the theater of the absurd, it’s appropriate to point out that Paul Page is a veteran sportscaster that called the Indy 500 on ABC for several years.  How the mighty have fallen.  I’m talking about Indy, of course.

3:02 – We join the Women’s Hot Dog Eating Contest already in progress with the intro music still playing.  So much for that celebration of Title IX, eh, ESPN?  Paul Page is joined by (match? game? eatery?) analyst and Major League Eating President Rich Shea.  Rich and George Shea (Master of Ceremonies) are brothers that founded Major League Eating and brought competitive eating into the modern era.  Somewhere Ken Burns better be planning his next documentary.  It should also be noted the Shea brothers make Ray Hudson sound like Ben Stein.

3:04 – Rich Shea: “We’ve got some of the Real Housewives of Competitive Eating up there.”  ARE YOU LISTENING, BRAVO!!

3:05 – Rich Shea on leader Sonia “The Black Widow” Thomas: “She is the Katniss Everdeen of Major League Eating.  She sets a snare and she has trapped Juliet it would appear.”

3:05 – Rich Shea, once again: “She likes to eat near the sea cause these Nathan’s Hot Dogs are falling like the Euro for Sonia Thomas.”  Yikes.  Even Jay Leno thought that joke was bad.

3:06 – Sonia Thomas sets a new women’s world record with 45 hot dogs and wins back-to-back titles.  So this is what Jim McKay was talking about when he spoke of the thrill of victory.

What follows is perhaps the greatest single SportsNation poll question in ESPN’s history:

Who missed their calling as a competitive eater?

Man, Eddy Curry can’t get no love.  Of course, Barkley would go on to win the poll.  So much for that Weight Watchers campaign.

3:13 – This is perhaps the worst two minutes ever seen on cable television, yes even worse than Stephen A. Smith going on about Brooklyn.  Rich Shea claims fans come from all over the world to enjoy the contest, and then interviews two fans – a female from Massachusetts and a Vanilla Ice doppelganger from Brooklyn… where the contest is held.  My, they had to travel far.  Shea then prompts the two to repeat words after him, which was evidently done to show the humorous way Brooklynites enunciate certain words like “mozzarella” and “fuhgeddaboutit.”  Hey, at least it’s less offensive and stereotypical than bringing in Chinese eaters to make fun of… like last year.  Please God, someone get me Chris Berman to save me from this.

3:15 – We cut to footage of the weigh-ins in Manhattan with New York Mayor Michael Bloomberg on hand.  If you’ll recall, that’s the same Michael Bloomberg that wants to ban you from enjoying your big gulp drinks.  Politics.  *throws hands into air*

3:20 – Page informs us Nathan’s donates 100,000 hot dogs to the NYC Food Bank every year.  That’s a relief.  My conscience was starting to feel a little guilty that the celebration of gluttony that is this hot dog eating contest could sustain small villages around the world for several weeks at a time.

3:21 – Another canned segment introduces us to “Crazy Legs” Conti and Tim “Eater X” Janus, dubbed The Odd Couple of Competitive Eating.  I see less Felix and Oscar and more Celtic Pride in these two.  As if we needed more proof these people were certifiably insane, Conti tells us he owns a VHS of every Corey Feldman movie and Janus says he likes to practice laughter for fun.  All righty then.

3:29 – We have our second pre-taped segment on the dominance of Joey Chestnut, who’s getting the LeBron James treatment so far on the telecast.  The only thing missing was bringing Stephen A. Smith back with Skip Bayless to debate Chestnut’s clutchness.  Page and Rich Shea are then able to get a dig in at former 6-time champ Takeru Kobayashi (who hasn’t competed at Nathan’s since 2009 because of a contract dispute with MLE) for failing to defeat Chestnut in his prime.  Protect the shield, baby. 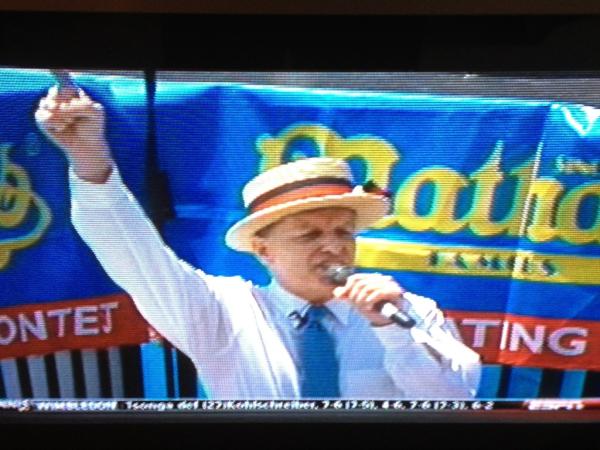 3:30 – Now for the time we’ve all been waiting for, the introductions of MC George Shea.  He opens the intros with this gem – “Destiny has arrived and it stands above us like a perfect blue sky!!!!”  Here’s the highlights of Shea’s introductions:

Tim “Gravy” Brown – “He is also the intellect behind Glutton Force 5, which is a Chicago food truck that serves chili in a bag and pork shoulder in a clear plastic cup.*  G-G-G-G-G-G GRAVY BROWN!!!”

*You’re telling me we can sell chili in a bag and pork shoulder in a clear plastic cup and we haven’t found a way to put people on Mars?  C’mon humanity.

Sean “Flash” Gordon – “He ate 19.5 peanut butter and banana sandwiches to honor the birthday of Elvis and he ate six pounds of french fries… uh… just because!”

“Crazy Legs” Conti – “He will always be known for the time he was buried alive under 60 feet of popcorn and he ate his way out to survival.  And that is why they call him the Houdini of Cuisini, Crazy Legs Conti!!!!”

Eric “Badlands” Booker – “For decades scientists have tried to find the hidden source of mass in the universe and they created a large hadron collider in Geneva in search of the so-called Higgs Boson.  In fact, the results of their test come out today.  But I can tell you something, you didn’t need to go to all that trouble.  The hidden mass of the universe is hidden in this man, the big man, the bad man… Eric “Badlands” Booker!!!”

“Notorious B.O.B” Bob Shoudt – “To this day he remembers the words of his grammy when he compared his thighs to salt hams that’d soaked too long in a tub of their own grime and he winces when he recalls his high school coach speculating aloud about whether his favorite words in the Engligh language were resting and heartrate or meatloaf and sandwich.  But no one’s ridiculed him since he became a hip hop icon* and he ate 13 pounds of chili spagetti, 23 pounds of salmon chowder, he is now the Notorious B.O.B!!!”

*Why does the Notorious B.O.B, hip hop icon, enter to Phil Collins’ In The Air Tonight?

Joey Chestnut – “We kneel at the side of the road to be covered in the dust from the hooves of our enemy’s horses and we chew on gravel and we smile the smile of broken teeth and supplication, but one man will not yield!  One man will stand over it and he will cast you in his shadow!  Because the rock on which he stands IS NOT A ROCK!  It is courage!  It is hope!  Enough to sustain a nation!  He will howl at the moon and he will call his name into the new day to put his claim!  Ladies and gentlemen, the #1 ranked eater in the world… he has God’s username and password and he does with it what he chooses.  The Nathan’s Famous Hot Dog Eating Champion, JOEY CHESTNUUUUUUUUT!!!”

3:44 – The contest finally begins and suddenly all the pomp and circumstance becomes a true test of mental, physical, and spiritual strength.  A test of the human will.  After the first minute, last year’s runner-up Pat Bertoletti has a 1 dog lead over “Megatoad” Stonie and Chestnut.

3:46 – Chestnut, Bertoletti, and Stonie trade the lead back and forth over the next two minutes as the crowd falls into some sort of hushed, awed silence.

3:47 – Rich Shea: “Extant buns are a nightmare for an eater, they are like student loans for a 22 year old postgrad, not what you want.”  It’s obvious Shea used his best 2 or 3 lines for the women’s contest earlier in the telecast.  Unfortunate.  Chestnut establishes a solid lead almost halfway through with 35 dogs to Stonie’s 32.

3:49 – Rich Shea: “Badlands’ belly is enormous.  He’s the Grand Master Flash of corned beef hash.”  He’s found his second wind!  By the way, 4 and a half minutes left and Chestnut now leads Janus by 7 dogs.  Thankfully, nobody has harmed the hot dog mascot yet.

3:50 – Oh no, Bertoletti may have bitten his cheek!  Is that the hot dog eating equivalent of turf toe?

3:51 – Barring a shock “reversal of fortune” Chestnut will waltz home to his 6th straight title.  He leads Janus and Bertoletti 54 dogs to 42 with 2:20 remaining in the contest.  Can Chestnut best his world record of 68 dogs???  Chestnut’s closing power is matched only by Tiger Woods and Secretariat… ya know, if they were competitive eaters.  Rich Shea also tells us Chestnut and Bertoletti may have had a falling out at the cheesesteak eating contest.  You hate to see that happen in the great sport of competitive eating.

3:53 – We’re in the final minute and Chestnut is 7 dogs short of a new world record.  Let’s watch the drama as Joey Chestnut claims his ultimate destiny in the last 30 seconds and wins his 6th hot dog eating title…. in slow-motion.

3:54 – Rich Shea: “I don’t know whether it’s the heat or the emotions pumping through my veins, but I am overcome right now.”  It’s neither.  It’s indigestion.

3:58 – Chestnut officially ties his world record with 68 hot dogs and buns.  After the contest, Chestnut, ever the showman, expresses disappointment for the crowd that he was only able to tie his world record.  At least we’ll have something to look forward to next year.