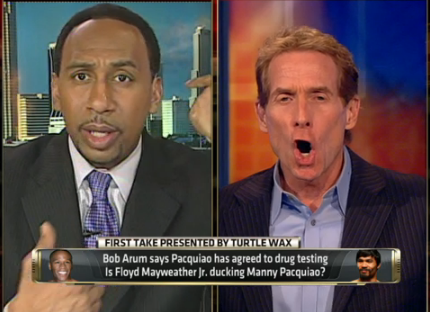 Yesterday morning First Take was busy chipping away at the souls of all mankind like any other normal weekday morning.  Except, Stephen A. Smith appeared to drop a terrible world that should never be uttered on television under any circumstances while talking to Dahntay Jones.  To most people watching, Smith said, "ni**a please!"  Here's the video evidence…

I've listened to that clip 50 times and I think Stephen A. Smith said "ni**a please" on national television.  In fact, I'm mostly positive he said it.  But, I can't definitively say that's what happened because it's so hard to clearly decipher what Smith said in that moment.  It sure sounds like Smith dropped the n word on ESPN2, though.  Moreover, there aren't any other reasonable explanations for what word he actually did say there, unless he's incorporating unintelligible gibberish into his debating.  Then again, maybe that would be an improvement over the status quo.

If Smith didn't say the n word, then what did he say?

Well, that's a question SAS didn't bother to answer when offering this denial on the replay of First Take.  Instead, he delivered a stern message and excused himself as a fast-talking New Yorker who got misconstrued.  Smith's rationale seems to be that if he did say that word, he would have apologized and ESPN would not have condoned it.  In other words, you just have to take his word for it, no matter what you think you heard…

So we're left with a bizarre situation where the internet says Stephen A. Smith said a bad word he said he didn't say.  Clear as mud, right?  Unfortunately, the video leaves little doubt what Smith said, but just enough ambiguity to offer a strong denial and attempt to sweep it under the rug as if nothing unusual or controversial happened.

But then, just as the controversy should have died down and evaporated in the lightning-quick news cycle, ESPN edited out whatever it was Smith said before saying "please!" in the First Take replay.

Regarding the editing job, ESPN told Outkick The Coverage, ""Stephen A. Smith vehemently denies using any inappropriate language. We didn't leave it on the re-air as we didn't want to create more confusion if people misunderstood him."

If Stephen A. didn't use inappropriate language, then what is there to edit?  Either he said it… or he didn't.  Either there's something to wipe away or not.  The only confusion that exists is why ESPN would edit out a non-offensive, hard-to-understand word from the First Take replay?  You'll notice the statement also refuses to say definitively whether or not SAS actually said what we all think he said, just that he "vehemently denies" it.  Well, that's helpful, but again it doesn't answer the question of what he did say if it wasn't "ni**a please!"

Furthermore, ESPN has precedence with how to handle racially charged offensive words from just this year.  An ESPN.com editor was fired for using a "chink in the armor" headline about Jeremy Lin.  ESPN anchor Max Bretos was suspended 30 days for using a similar phrase when asking a question about Lin as well, even though it was clear Bretos was making no attempt at a joke.

So what about Stephen A. Smith and ESPN's decision to stand behind him in this case?  What about their decision to edit out a word that was supposedly clean, which only creates a massive state of cognitive dissonance.

Smith himself hasn't informed us what word or noise emerged from his mouth, only a denial and defiance.

You can choose to believe Smith and ESPN or your ears in this case.  You may also choose to make a larger statement about racial discourse in sports moving forward from these clips.  But what I find disconcerting in the wake of all of this is the lack of clear answers from the parties involved.  We don't know what Smith claims to have said.  We don't know why ESPN would edit out a non-profanity, other than to avoid and create more confusion.  We don't know whether or not Smith is being shown favortism by Bristol and a double standard exists.  We don't know the extent to which ESPN is protecting one of their prized assets in this case – a man whose career has been resurrected from the dead thanks to ESPN's fixation with high debate and high volume.

Maybe that's all we do know from this episode.  ESPN is all-in with Stephen A. Smith.  At all costs.  And much like Smith's words, the true meaning to that reality is open to interpretation.

(videos via The Big Lead & Outkick The Coverage)