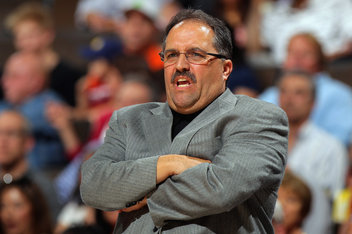 Stan Van Gundy has finally signed with a network to begin his media career… and there's nothing David Stern can do about it this time.  After embarrassing reports of Stern blocking Van Gundy's hiring to be a part of ESPN's NBA coverage, the former Magic head coach has signed on with NBC to be a basketball analyst and radio host for the new NBC Sports Radio network.  Van Gundy will be on the call next week for the Navy-Marine Corps Classic between Georgetown and Florida as announced by the peacock…

"Former NBA head coach Stan Van Gundy will begin an on-going relationship with the NBC Sports Group by joining NBC Sports Network’s coverage of the inaugural Navy-Marine Corps Classic, and by becoming a regular contributor to NBC Sports Radio. Van Gundy will make his national-television debut by serving as an analyst during the inaugural Navy-Marine Corps Classic, featuring college basketball powers Georgetown vs. No. 10 Florida, on Friday, November 9 at 9 p.m. ET. The game will be played on the deck of the USS Bataan, at Mayport Naval Air Station in Jacksonville, Fla.

In addition to the Navy-Marine Corps Classic, Van Gundy has signed on with NBC Sports Radio to be a regular contributor. Initially, he will call-in for regular guest segments on numerous NBC Sports Radio programs, contributing to the pro basketball discussion of the day. Beginning in 2013, Van Gundy will serve as a guest host every Friday for one of NBC Sports Radio’s nationally-distributed shows."

It's not only a good move for NBC to hire Stan Van Gundy as one of the most coveted ex-coaches on the market, it's a needle to ESPN, who bowed down to the wishes of Emperor Stern in passing on SVG.  There's only one problem with Van Gundy's hiring by NBC in the long term – they have no basketball games anyone wants to watch!  NBC Sports Network has rights to the Atlantic 10, Colonial Athletic Association, and Ivy League.  While those Cinderellas are great stories come March, I don't think many folks would sign up to watch those conferences from December through February.  Look at the schedule.  Providence at Brown?  Northeastern at George Mason?  Dayton at Saint Louis?  St. Joseph's at La Salle?   Is SVG really going to sign up to call those games throughout the winter?

The radio side is a complete unknown at this point, but NBC would be wise to make SVG a key player on shows like NBC Sports Talk or even The Dan Patrick Show and make him their lead basketball analyst for college and the NBA until the network can get a better inventory of basketball games.  It just so happens the Big East is now on the market.