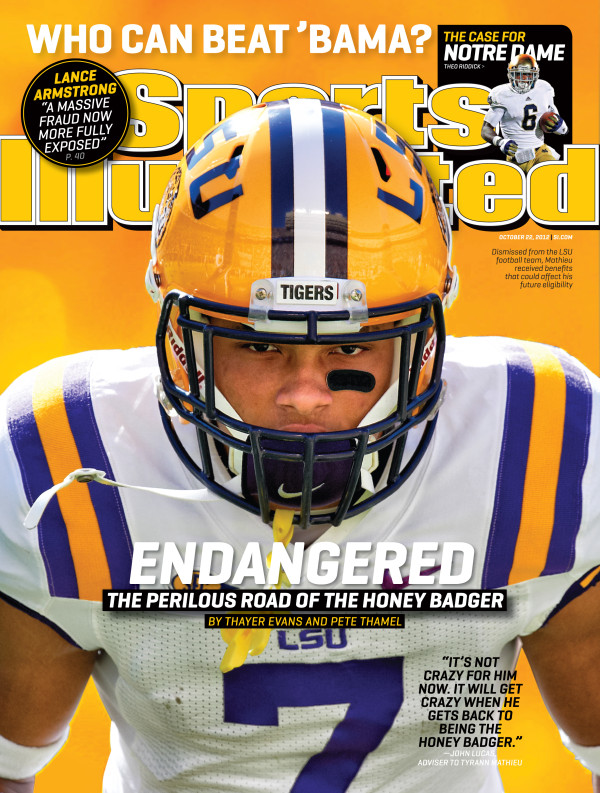 This week, Sports Illustrated attempted another high profile investigation into a prominent college sports story.  New SI hires Pete Thamel (formerly of the New York Times) and Thayer Evans (formerly of Fox Sports) published a lengthy piece on former LSU defensive back Tyrann Mathieu.  As the "Honey Badger" – a Heisman finalist and one of the most recognizable athletes in college football, it was a huge story this summer when Mathieu was kicked off the LSU football team due to substance abuse problems.

Mathieu has since re-enrolled at LSU, choosing not to transfer to an FCS school (and subsequently go to the NFL Draft), leading to speculation he could play football again for the Tigers in 2013.  The Sports Illustrated article's major revelations are that party posters and videos for a night club using Mathieu could harm his future eligibility and sources told SI Mathieu had received benefits from the club as well.

The explosiveness and relevance of a cover story regarding the eligibility of someone who's not even playing college football at the moment is subject for debate.  What's also up for debate is the extent Sports Illustrated and Thamel in particular went to get their story, with serious allegations being levied by many parties involved.

Mathieu and his parents declined to be interviewed by SI, but did speak to Fox 8 in New Orleans.  There, Honey Badger called the SI article "ridiculous" and said SI and Thamel repeatedly harassed him from blocked phone numbers.  The Mathieu family even hired a lawyer to stop Pete Thamel from trespassing on their property and violating their privacy.

Thamel could defend those allegations as being a dedicated reporter committed to his search for a story.  But there's another allegation that is well and truly explosive and much more serious.  Promoter Xavier Williams accuses the Sports illustrated reporter of trying to use a $2500 bribe to get him to incriminate Mathieu and lie about giving the Honey Badger free stuff in a report by WBRZ in Baton Rouge.  Sports Illustrated said the allegations were "absurd" and "completely fabricated."  Video via Friends of the Program…

So we've basically devolved into a "he said, she said" story with neither side likely to give any ground.  Across the media spectrum, journalists, bloggers, and fans are weighing in on three different sides of the story.  Some are blasting Thamel for again trying to tear down another college athlete (just mention his name in Lexington and enjoy the warm reception).  Others are defending Thamel and his reporting chops.  And then there are those taking a more nuanced approach.

My problem with Pete Thamel remains the same…why spend your life trying to ruin the lives of college kids? Is that really a noble pursuit?

I know hes the competition but i am just certain that pete thamel has never tried to bribe anyone. Hes tough but ethical.

People sure are anxious to believe awful stuff about Pete Thamel. Color me skeptical when it's one angry person making the accusation.

While the bribing allegations are certainly the most serious, it's tough to see that gaining traction unless hard evidence emerges with the word of Sports Illustrated going against a night club promoter.

The allegations by the Mathieu family will cause many to question SI in pursuing a story so doggedly that quite frankly doesn't have much payoff – that may be the most disturbing trend for Sports Illustrated.

The Honey Badger cover story smells a lot like George Dohrmann's supposed bombshell in Columbus on Jim Tressel and Ohio State.  That story largely fell flat after an unusually high amount of hype from SI.  In fact, the vociferous blacklash, denials, and accusations towards Dohrmann from principal figures in the story sound very similar to what those around Mathieu are saying now.  The Mathieu cover story is more about his troubled family and personal life and less about what benefits he may have received, which again seem like footnotes in the grand scheme of things.  The outrage over promotional videos and a free room at a night club is going to be muted to say the least, especially when the systematic academic fraud scandal at North Carolina is still mostly swept under the rug by the NCAA and the national media.

Serious questions need to be asked in following up on the allegations against SI in this case because the public impression is out there that Thamel, Evans and SI have overplayed their hand and created a story to sell magazines.  For a journalistic entity, that's one of the most damning perceptions that can exist, and one that has stalked ESPN repeatedly for the past year (see: Syracuse).  Did Sports Illustrated go out of their way to find something new to drag from the shadows on an already disgraced college football star to fit their narrative?  Why did they push acceptable boundaries in pursuing Mathieu so aggressively?  Why are their most significant college sports investigations met with such heavy backlash?

At the moment, the controversy surrounding the story by Thamel and Evans is more noteworthy than the report on Mathieu itself.  That's the most troubling sign for Sports Illustrated.