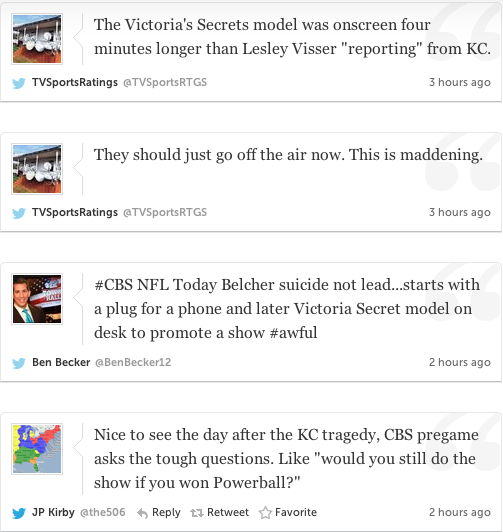 All eyes were on the NFL pregame shows today to see how they would cover the unspeakable tragedy in Kansas City yesterday.  A day after Chiefs LB Jovan Belcher killed his girlfriend Kasandra Perkins and then took his own life in front of head coach Romeo Crennel and Scott Pioli, the NFL moved forward.  There's no blueprint to cover a human tragedy like this for any NFL pregame show.  There's no "by the book" method to talk about such a real life tragedy that so completely dwarfs the sports that serve as a distraction to real life.

I get uneasy bashing a network's approach to a story that is stepping so far outside their element because it's difficult to separate a right or wrong decision.  There are many that are questioning the Chiefs' decision to go ahead and play today's game against the Panthers.  Is that a right or a wrong decision?  Or is it only up to the team to decide?

Do the pregame shows take that lead and carry on with business as usual?  Do you skip the silly comedian segments and understand the gravity of the time?  In what way do you even attempt to memorialize Belcher and/or Perkins?  Each network took a different approach and in one sense, there has to be some learning on the fly by the networks to know how best and tactfully to cover this story.

In truth, the only missteps are going to come in hindsight, which is what CBS discovered Sunday.  While Fox opened their pregame show with no fanfare and an immediate story on the tragedy, The NFL Today on CBS carried on as normal with a sponsored segment and didn't mention the events in Kansas City until 12:05.  The decision to not lead with the Belcher murder-suicide drew immediate outrage from viewers and followers on social media as tone-deaf and inappropriate.  The fact that CBS spent more time shamelessly cross-promoting a Victoria's Secret program than they did on the initial Belcher report only increased the criticism towards the network.  One of the most valuable elements of Twitter is unfiltered real-time feedback.  And the viewers of The NFL Today spoke clearly Sunday.  As always, these are Real Tweets from Real People… 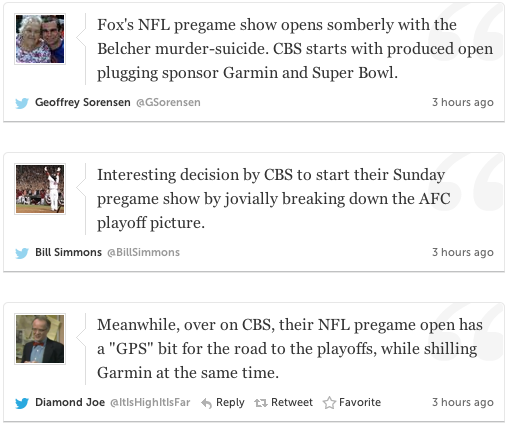 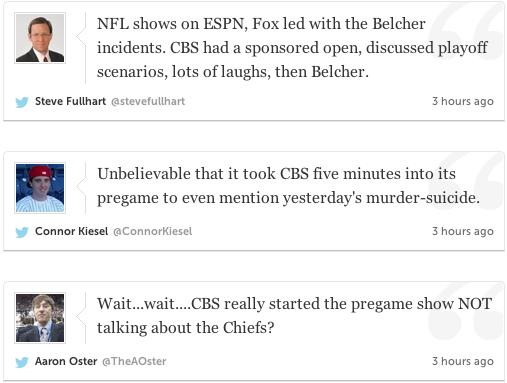 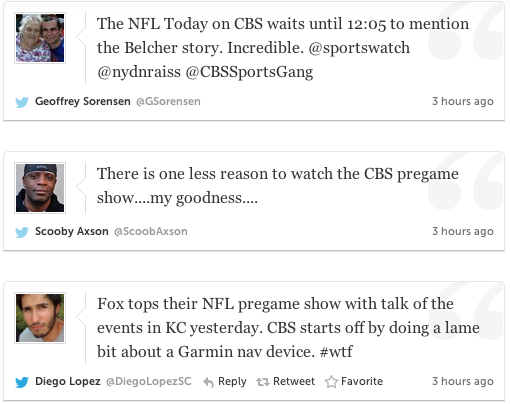 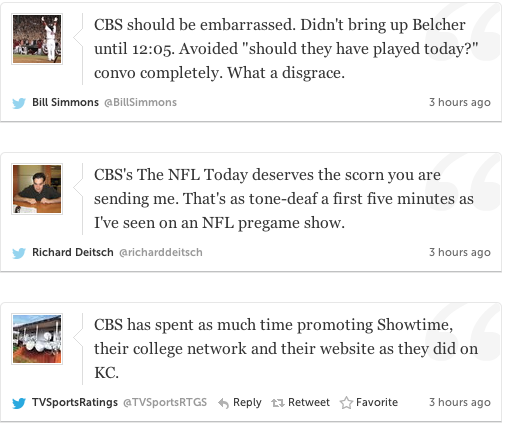 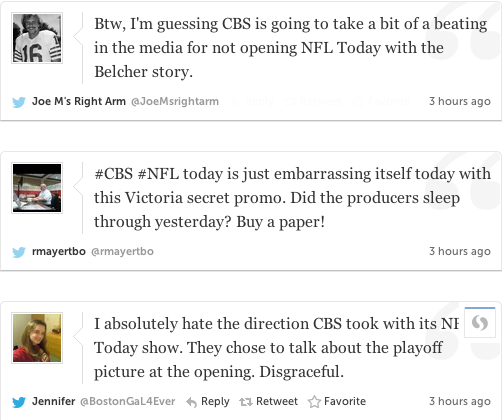 It was clearly the wrong decision for CBS to not lead with the Belcher story at 12:00 in hindsight.  At the same time, I do understand what a difficult situation this was for all the pregame shows.  There was no precedent.  Certainly, the network meant no disrespect to the tragedy, but more work had to be done to make sure the entire show better respected the weight of the story – especially making sure to lead with the news at 12:00.  Unfortunately for CBS, that's a lesson that was learned in real time.