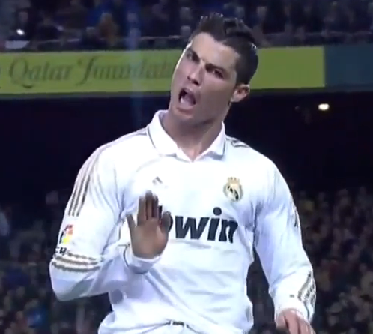 Real Madrid all but clinched their first La Liga title since 2008 with a 2-1 victory over Barcelona in El Clasico.  Real moved seven points clear of Barcelona at the top of the table with only four games remaining in the league.  It was the first league victory in El Clasico for Real Madrid in eight games, dating back to when they last won the league in 2008 and only the second victory for Jose Mourinho since he took charge in 2010.  The indomitable Ray Hudson of GolTV was there for the occasion, here’s the transcripts of his best calls, including Cristiano Ronaldo’s game winner in the 73rd minute…

“Ay!… Goal!… they’re molten celebrations now from the Madridistas in stunned Camp Nou looks on.  A collection of errors.  Carlos Puyol has the ball locked between his legs, in between his feet, and cannot shift it, doesn’t get it here.  Wonderfully won by Pepe.  Valdes, perhaps should have had it pulled in once it goes to ground… it’s just unfortunate between the captain and his goalkeeper.  It falls right between the devil and the deep blue sea and Khedira says thank you very much.  First blood to Los Blancos.

“OOOHHH… GENIUS BEYOND BELIEF FROM LIONEL MESSI… take a look at this and drop your jaws to the ground.  Amazing from Lionel Messi on the run between three players, slips it in beautifully, should have been a corner.  I don’t believe Xavi appealed for that one even, but that should have been a goal.”

“Oh, magic… brilliant… AH!… WOOHH… AH!… astonishing, wonderful buildup.  Iker Casillas does everything he can spreading himself like a big yellow octopus to keep them out, but on and on they came and it’s that man, man, I told you, danger in the Chilean.  Alexis Sanchez totally like a shark and he dives in here.  Wonderful buildup by the artful dodger Messi, backheel by Iniesta, Tello slapshots it, wonderful followup from Adriano, Sergio Ramos cannot get it out of dodge.”

“GREAT BALL IN, HE’S ON… DEADLY FROM DARTH VADER!!  The dark invader they call him, well this one is a DEATH RAY HIT from Real Madrid’s glamour boy.  It’s a fabulous ball to find him again.  When we see this again it’s steered into him, it’s curled into his stride and he ain’t ever gonna miss this, even against Victor Valdes.  Look at this ball, guess who it’s from (Ozil).  Wonderful Avatar eyes finds the dark invader who is in like a cat burglar behind the defense.  He knows the goal posts ain’t movin and he tells them be quiet, I’m runnin this show now, baby!  What a game!”

“Big celebration days and they’ll be some major hoochie gucci going on in the bedrooms of Madrid tonight!”