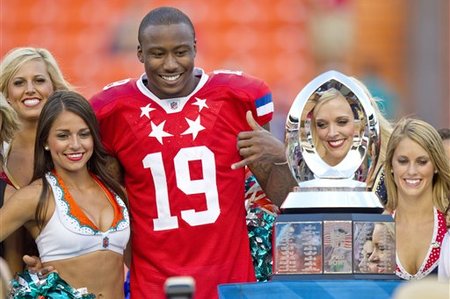 Ratings for the NFL’s Pro Bowl are in, and they’re down 8.1% from last year. The 2011 Pro Bowl drew an 8.6 last year on Fox, but this year’s was just at 7.9 on NBC. But overall, in spite of its less than competitive nature, the Pro Bowl is still the king of All-Star games. 12.5 million people watched the game this season, in comparison with 11 million for last year’s MLB All-Star Game, 8.1 million for the NBA All-Star Game last year (on cable, no less), and 2.4 million this past weekend’s NHL All-Star Game in Canada (the total number of viewers in North America still likely placing it 4th out of the 4 major All-Star games).

None of the games are really played hard with the possible exception of the MLB game. Points are usually prevalent in the games, with the NHL All-Star game cracking 20 goals, the Pro Bowl breaking 100 points, and the NBA All-Star Game almost exceeding 300 points last year.

In the MLB game, it’s kind of tough to take it easy, unless you just expect your pitchers to throw 85 mph fastballs instead of 97 mph heaters, and have the fielders jog towards every ball and not really bother laying out for any balls. But by the same token, the MLB All-Star Game is the only one that “matters” (despite your opinions on that, it still does), and each team actually has some motivation to try to win.

If I had to watch any of the games, I’d choose the MLB game, which I usually do watch every year. The other games just seem like a total joke, and despite Bud Selig’s incompetence in the office of MLB Commissioner, the MLB game at least has some semblance of “mattering.” But the fact that the Pro Bowl continues to win the ratings battle once again emphasizes what we all know: the NFL is king in this country, even amongst exhibition games.

Tell us which All-Star Game you would watch if given the choice to only watch one.  Of course, none is also an option…