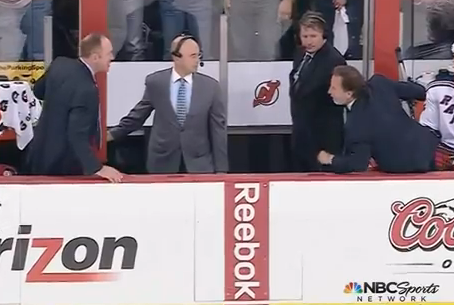 Hockey broadcasting has changed quite dramatically over the last decade, and one of the more notable changes has been the move to put many colour commentators (and even play-by-play announcers on occasion) between the opposing teams’ benches. The near-ice location often allows analysts to get a great sense of the reactions from players and coaches on both teams, and it’s worked very well on many fronts. However, the increased access also presents a dilemma for between-the-benches commentators like NBC’s Pierre McGuire, as they have to choose between reporting everything that goes on and only passing on certain details that won’t embarrass the people involved. It’s not an easy line to walk, but McGuire’s conduct during these playoffs in particular calls into question if he’s too heavily invested in preserving the reputations of coaches and the league. As Neil Best of Newsday writes, McGuire has deliberately chosen to keep some things back, especially in regards to the heated Game 4 confrontation between Devils coach Peter DeBoer and Rangers coach John Tortorella:

McGuire, a former NHL coach, said he alone decides what to share about what he hears and is particularly careful about injury information. He said neither NBC nor the league ever has created rules for what he can report, “and for that, I’m appreciative.” His approach has led to criticism in some quarters for his withholding of information, including after an even more heated argument between coaches Peter Laviolette and Dan Bylsma in the Flyers-Penguins playoff series. But he said his privileged location and respect for the coaches and players has led him to keep some things off limits. “I think that’s part of why it’s worked for seven years and will work for a lot longer,” he said, adding that producer Sam Flood has been supportive of his philosophy. “The point of ‘Inside the Glass’ is to try to relay the intensity and passion at ice level,” he said. “One of the reasons why it’s had such a positive effect is that slowly but surely we’ve been able to build up a trust factor between the coaches and players and NBC.”

McGuire isn’t entirely in the wrong here. For one thing, muting his microphone during profane yelling matches of coaches would seem like the right idea; there’s always a substantial flap whenever a sports personality swears on-air, and the conversations between hockey coaches like John Tortorella, Peter DeBoer and Peter Laviolette probably make Shaquille O’Neal look like Mother Teresa. Given the way these announcing booths are set up, with analysts chiming in frequently during momentary lulls in play, if McGuire (or any other between-the-glass analyst) recorded a profane tirade from coaches, it would be far too easy for it to somehow get on the air (and cause a massive outcry in the process). Thus, picking up full audio of what coaches say to each other seems out of the question for the moment.

However, that doesn’t mean that McGuire should be keeping all of what’s said under his hat. Now, how he should relay it is up for debate; given the desire of broadcast networks to keep sports as family-friendly as possible. It’s probably smart for McGuire to keep from referencing the specific words used on air. His approach may be going too far the other way, though. For one thing, during the live broadcast, McGuire could get creative and find ways to offer more details about what’s going on than just saying it was “two guys venting.” Something along the lines of “Tortorella questioned DeBoer’s parentage” or “Laviolette insulted Bylsma’s mother” wouldn’t seem too objectionable from this standpoint, and that would provide the viewer with a better sense of the emotion that’s really involved in these arguments. Possibly the best way to deal with this from a journalistic standpoint would be for McGuire to relay coaches’ comments euphemistically on-air, but then provide full details on an NBC blog like Pro Hockey Talk, with whatever asterisk usage the network deems appropriate. That would allow fans to see what’s really going on between the coaches without unnecessarily offending viewers.

That seems unlikely to happen, though, and a key question there is why. If McGuire’s decision not to report the details of these conversations is solely thanks to NBC policies, that’s understandable (if wrong from this standpoint); journalistic organizations each have their own standards, and they’re entitled to set those. If, however, he’s keeping things back out of a desire to keep the NHL happy, that’s much more problematic. Keep in mind that McGuire is a former NHL coach, executive and scout (with Pittsburgh, Hartford and Ottawa), so he obviously has some empathy for where the coaches are coming from.

McGuire talked about his role between-the-benches Wednesday with Dan Patrick, claiming he’s an analyst and not a reporter (another arguable point) and defending his relative silence saying, “I’ve been a part of the coaching fraternity in the NHL for a long time…we’re invading their territory.”

It’s not just him, either; other between-the-benches analysts, like CBC’s Glenn Healy and TSN’s Ray Ferraro, also have substantial histories with the league. That doesn’t mean they don’t criticize NHL decisions or policies, as they all do, but it does mean that their commentary and decisions on what to broadcast have to be weighed against those backgrounds. For these analysts, is their primary goal informing the viewer as much as possible, or is it trying to keep the league happy?

In the larger picture, this is about much more than just McGuire, or even the role of between-the-benches hockey analysts. It speaks to the larger conflict that arises when journalistic organizations broadcast sports events; is the broadcast a news event where the goal is to report as much as possible (sometimes against the desires of the leagues or teams involved), or is it a partnership where the league and teams are valued allies? Recent history across sports would suggest the latter is becoming more prevalent. To an extent, that’s somewhat unavoidable; leagues always want to look good, and while it’s debatable if swearing itself is as much of a turn-off as everyone thinks (see the success of the profanity-laden segments of Hard Knocks and 24/7), it’s understandable that sports organizations don’t really want their employees’ in-game cursing broadcast nationally. Moreover, if NBC (or any sports network) just said “Screw it” and broadcast any event they had rights to with no filters whatsoever, they probably wouldn’t have those rights for long.

Specifically on the idea of between-the-benches analysts, it’s clear that the NHL wouldn’t put up with them for too long if they relayed absolutely everything they heard, and on the whole, filtered observations from ice level are a step forward from the old idea of keeping analysts well-removed from the benches. There’s still a debate to be had about where exactly the balance lies and when the filters should kick in, though, and there’s a strong argument to be made that McGuire should shift his personal filter a little more towards the journalistic side and a little further away from keeping the league happy.