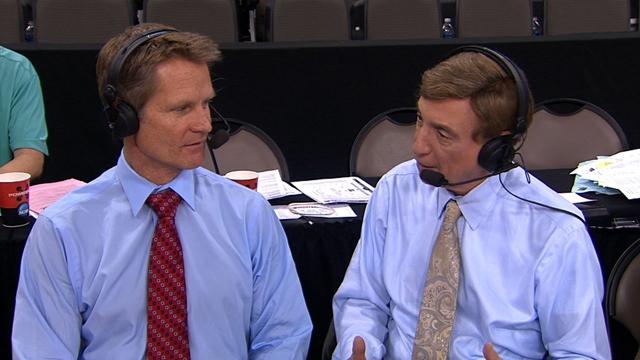 Sports Illustrated just released a poll of NBA players voting on their favorite NBA announcers.  Charles Barkley won the vote, but a few things struck us as odd about the list.  For one, Barkley and others like Craig Sager aren’t game announcers so to say.  Also, guys like Bill Walton and Mark Jackson made the list even though one has made just sporadic appearances in recent years and the other actually coaches the Golden State Warriors.  And to top it all off, Reggie Miller made the Top 5!

With that in mind, it got us thinking about our own list of favorite NBA announcers from around the country.  Who are our favorite NBA game callers?  We’ve spanned local and national announcers as well as television and radio.  A few of the choices may surprise you, but remember these kinds of lists are always fairly subjective.  Check out our Top 15 Favorite NBA Announcers after the jump and let us know who you think is too high or too low and who should have made the cut…

This is a bit of a homer choice being subjected to Cavs games on FSN Ohio, but Austin Carr is the best medicine for a once-again struggling franchise.  AC bleeds wine and gold as a former player and working for the Cavs front office.  He’s never going to win a Sports Emmy, but his signature calls like “DEEEEP IN THE Q!!” and “THROWS THE HAMMAH DOWN!!” add some much needed energy to a franchise still recovering from that one decision.

Incredibly, Jack Ramsay still calls the biggest NBA games for ESPN Radio at 87 years old.  One of the most respected coaches in the league’s history, an NBA game just seems right with Ramsay calling the action and diagnosing what’s happening on the floor.  Had he done more television work than radio at ESPN over the years, he would be right up there with Hubie Brown and Doug Collins as the most respected analysts in the game.

It’s a shame Durham isn’t more recognized nationwide as he’s tucked away on ESPN Radio, but he’s a fine play by play announcer.  His work with Dr. Jack Ramsay would contend with any broadcast team, no matter the sport.  Even though he’s most known for his call of Michael Jordan’s heroics in the 1989 Playoffs as the voice of the Chicago Bulls, his work still stands as very strong on the national stage.

Eagle has long been one of the most underrated announcers in the country, but more and more fans are slowly being tuned into his work.  His profile has been raised with the NFL on CBS and his work during the NCAA Tournament, but his work for the Nets calling NBA games is just as good.  He worked a couple playoff games for NBA TV this year, so maybe it’s just a matter of time before he gets called up to do more national NBA games.

In a very short amount of time Stacy King has become one of the most entertaining announcers in the NBA.  Whether he’s describing a Derrick Rose ankle breaker or a cameo by the White Mamba, King has certainly carved out a unique niche in Chicago with his broadcasting antics.

You’ve likely heard him call a Blake Griffin dunk or two.  The Clippers play by play man is one of the most endearing announcers we’ve had a chance to listen to.  When you’re the voice of the Clippers for multiple decades as Lawler has been, there has to be a sense of levity in your play by play.  From Lawler’s Law (first to 100 wins, it’s the law) to his signature “Oh me, oh my!” and “BINGO!”, Lawler is able to balance humor, excitement, and communicating from the Clippers perspective without being an unabashed homer.  Thankfully, he now has what looks to be a winning team for the next few years.

C-Web may be the announcer with the least experience on the list, but his star is rising in the broadcasting world.  He started out on the Inside the NBA set alongside EJ, Kenny, and Charles, and even from the beginning you could see the potential of Webber on TV.  Since moving to a game analyst for TNT and NBA TV, Webber has continued to take steps forward.  He has a conversational style that’s easy to relate and listen to as a fan.

Like a whirling dervish, Walt “Clyde” Frazier glides and slides his way into the countdown.  His phraseology and rhyming skills has spawned a hilarious parody Twitter account and his style is like a sophisticated Craig Sager.  Aside from maybe Bill Walton, there’s no more colorful personality in the sport.  But on top of all that, Walt is first and foremost a great analyst.

Somehow, Kevin Harlan still feels underappreciated as the announcing genius that he is.  Who else can maneuver so seemlessly through radio and TV, basketball or football?  Even though he’s great on Westwood One’s NFL radio coverage, basketball is where Harlan’s excitement truly gets to shine.  He’s Gus Johnson, but with the play-by-play fundamentals to back up his work.  Here’s hoping Harlan gets to call the biggest NBA games one day as he does now with the NFL.

It would be impossible for us to compile this list without acknowledging the most tenured announcing team currently on the planet or splitting the pair.  Mike Gorman is the epitome of a pro’s pro while Tommy Heinsohn is the epitome of the homer announcer (but don’t forget he’s also a legendary player and champion coach).  Even as a non-Celtics fan, you have to appreciate their chemistry as a broadcast team.  They are an instituion within the Celtics franchise as much as names like Red, Bird, Havlicek, and Pierce.  And even after so many years together, they are just as informative and entertaining for Celtics fans as they were when they first began.

The voice of the NBA Finals on ABC and ESPN’s lead NBA commentator still doesn’t get the credit he deserves.  He’s long been thought of as Marv Albert’s understudy, but that takes away from his actual abilities as a play by play guy.  Breen isn’t one to try to show up the action, but just listen to his call of the Mavericks’ dramatic comeback win over the Heat in last year’s Finals as just one example, and you’ll see he truly earned his place calling the NBA Finals.  It also doesn’t hurt that Breen is one of the most likeable announcers in sports, already making multiple appearances on our AA podcasts.

As AA legend goes, founder Brian Powell actually decided to start the site after hearing one of Hubie’s legendary diatribes.  However, it can’t be disputed that Hubie stands head and shoulders above the rest in terms of teaching the game to the audience.  Hubie has also seemingly aged very well in his analyst role, something other announcers can’t say.

We have to admit, we were skeptical as to whether or not JVG would be a success on his own when partner Mark Jackson left to coach the Warriors.  Van Gundy started out very strong, but in recent years he began to go on more tangents like a young Andy Rooney as he bantered with Jackson and Mike Breen.  However, this year Van Gundy has definitely grown into the role as ESPN’s solo lead analyst.  He’s toned down the tangents a bit while still having a sort of likable, irreverent persona.  His no-nonsense style (especially towards officials and flopping) has been refreshing and he’s not afraid to question things happening out on the court while providing strong analysis.

Sandwiched around a stint as Suns GM, Steve Kerr has quickly become the most insightful and polished analyst in the NBA.  Kerr uses a coy sense of humor mixed with his experience as a player and executive to inform and entertain.  His success in seamlessly crossing over to the Final Four also shows his excellence in covering the pro and college games.

Who else could possibly top the list of our favorite NBA announcers?  Marv Albert and the NBA go hand in hand like all the other great combos in history.  He’s called NBA games for over 40 years going back to his days with the Knicks.  Marv Albert is the voice of professional basketball.  Although he may not have his fastball like he did 5 or 10 years ago, but even in 2012 there’s still nobody better at calling a game.  YES!