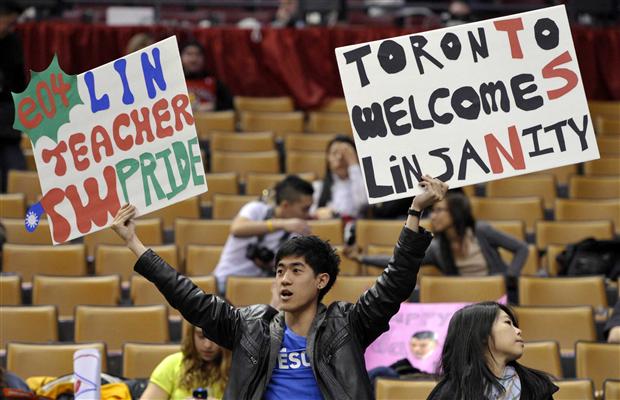 If you’re a sports fan, you’re probably quite tired of hearing about Jeremy Lin right now. Sure, the undrafted Asian-American guard who’s currently tearing up the NBA with the New York Knicks is a tremendous story, but despite warnings to the contrary, ESPN and other media outlets have essentially run the story into the ground. However, that’s much less true up here in Canada. Sure, there’s been a good deal of coverage of Lin, but most of that centred around his game against the Toronto Raptors Tuesday (which he did win in spectacular fashion), and most of it has since died away in favour of stories like CFL free agency and the NHL trade deadline. The resulting predominant image of Lin north of the border is of a player who’s a great story, but one that people aren’t completely exhausted of hearing about yet. Is that because Canadian media outlets are inherently more restrained, or just that they have other priorities? I’d argue it’s the latter.

Of course, there are some structural elements in favour of the first explanation. The Canadian media scene isn’t as dominated by a singular player as the U.S. is by ESPN, and even the largest sports media entity (TSN, which ESPN owns 20 percent of) is primarily limited to two television channels, three radio stations and a website. (They do have connections to a variety of other print, radio and television outlets through parent company Bell Media, but in terms of day-to-day content, that influence ranges from moderate to minimal.) There are plenty of other competitors out there, including Rogers Sportsnet (television, radio), The Score (television), and a variety of print and internet outlets. Thus, there’s less of a demand for cross-platform synergy (and less of a demand for opinionated content in general), key factors in ESPN’s overkill on the Lin story…

Still, the more important factor may be that Canadian sports media outlets (and their consumers) just aren’t as interested in the Lin story as their American counterparts. Sure, an impressive 342,000 viewers tuned in to watch Lin’s Knicks beat the Raptors on TSN this week, the highest audience for a Raptors’ game since 2009-10. That’s very good for a Tuesday night game on Valentine’s Day, an evening when many are probably far from their TVs. However, that’s well below, say, the average audience of 701,000 for CFL games on TSN in 2011 (which in turn was a massive drop from the 876,000 who’d turned in the previous year). It’s also substantially below the average audience of 728,000 for NHL on TSN action (mostly midweek games) in 2010-11, the 700,000 who watched the 2011 Daytona 500, and the 510,000 on average who watched the 2011 women’s curling Scotties Tournament of Hearts. And, Linsanity barely nudges out the average of 268,000 viewers who watched TSN’s 10 hours of NHL trade deadline coverage in 2011. That’s right: less than 100,000 Canadians on average tuned in to watch Jeremy Lin in a prime-time game Tuesday than viewed talking heads discussing NHL trades during the middle of the day in February 2011.

In fact, that NHL trade deadline coverage is useful as a comparison in more than one facet; it illustrates the first scenario of Canadian media outlets being notably more restrained across the board than their American counterparts has significant flaws. In Canada, the NHL’s trade deadline, a yearly event where a few meaningful players wind up switching teams, is hyped well beyond any similar event south of the border. It’s talked about for months in advance and very little work actually gets done on deadline day, with millions of cubicle workers across the country checking in to TSN and Sportsnet’s day-long televised and streaming coverage as soon as the boss turns away. Canadian media outlets of all kinds go nuts over the event, and few angles are too obscure to devote massive time and space to. It’s not just that either, as we’ve seen Canadian media blitzes over both in-country events (like the Grey Cup and the 2010 Vancouver Olympics) and foreign ones (the Tim Tebow saga). Thus, our media outlets are quite as capable of getting worked up over a story as the American ones.

What’s probably going on here is that basketball is just a much smaller deal in Canada than it is in the States. It helps that Lin isn’t Canadian, doesn’t have any particularly notable connections to Canada, and doesn’t play for a Canadian team. But the sport he plays is still likely the biggest issue. Sure, the NBA and March Madness have Canadian audiences, but minute ones compared to most sports. Canada’s own university tournament, the Final 8, is a terrific event that most Canadians have never heard of, and you could say the same for the country’s recently developed professional league. The game was invented by a Canadian, sure, and it’s been played up here for 100-plus years, but there haven’t been many memorable Canadian players (Steve Nash notwithstanding), and the Simpsons’ joke about Bart and Milhouse making the Canadian national team isn’t all that far off.

There’s only one NBA team up here since the demise of the Vancouver Grizzlies, and while the Raptors have their fans, they’re probably a third banana at best in Toronto (behind the NHL’s Leafs and MLB’s Blue Jays) and far worse everywhere else.  Thus, rather than anything to do with the differences in our media outlets, we hosers have likely largely avoided Linsanity and Lin overkill mostly due to the sport he plays.

If he was a hockey player, we’d be doomed.