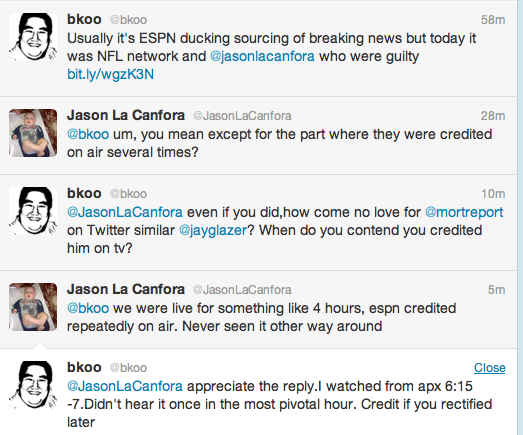 Update: Jason La Canfora has replied to this story and his comments are at the bottom of this post.

A while back, I wrote an extensive look at ESPN’s shady practice of piggybacking on other news organizations’ scoops and repackaging them as their own. Today the shoe was on the other foot as Chris Mortensen broke the news of Peyton Manning’s release in Indianapolis, scooping the likes of Jay Glazer, Rob Lowe, the Yahoo Sports gang, and Jason La Canfora.

Mortensen teased the news a bit before his television appereance and then took to Twitter once the cat was out of the bag.

Manning news #NFL32 now on ESPN2. @Sportscenter will cut in

Colts and Manning will part ways, per team sources #NFL32

Twitter blew up as it spread like wildfire, Mortensen and others made the rounds on ESPN, and other media organizations were in Defcon 5 catchup mode.

RT @GStevenAnthony: @JayGlazer will the colts cut Peyton on Wednesday what have you heard>yes, according to @mortreport. Good scoop

Unfortunately though, NFL Network did not abide by the same standards. Although clearly a scoop by Mortensen, NFL Network is continuing to scroll this on their breaking news bar.

Did La Canfora get this story before Mortensen or perhaps within minutes of him making it hard to realize who had the news first? Nope. La Canfora’s tweet occurred at 3:17, 12 minutes after Mortensen’s tweet and after his television appearance.

NFL.com’s writeup also ducked attribution as well despite having been updated multiple times in the hours after the news broke.

“The ending that most anticipated between the Indianapolis Colts and Peyton Manning will arrive on Wednesday, league sources told NFL Network insider Jason La Canfora, when the team is expected to release the four-time NFL MVP.

The team has made preliminary plans for the news conference Wednesday to officially announce the move, reported La Canfora.”

Although this is not the worst offense in the world as the news was disseminated far and wide, a scoop of this size, and clearly owned by one person, certainly should be recognized and not ripped off. La Canfora’s tweet didn’t give ESPN and Chris Mortensen that courtesy and NFL Network subsequently played dumb trying to pretend that the biggest player release in recent history was something that organically came to light.

Meanwhile, as NFL Network was playing catchup, I found myself very impressed with how ESPN mobilized to cover the news.

They aired a 3 minute canned feature on Manning’s career done by Jeremy Schaap. The typical well produced narrative contained back-story with clips and soundbites. While the quality of this piece was solid yet pretty standard, the fact that ESPN had it teed up and ready to go was impressive given they rolled it out within 15 minutes of the news breaking.

The Manning feature was followed up by a call with former Colts GM Bill Polian, who obviously is an ideal person to pow wow with on this subject.

An hour after the news broke, NFL Network had made some progress adding on to the story but still it was essentially Andrew Siciliano and La Canfora going back and forth with no produced pieces or guests.

While the NFL Network certainly has made inroads getting great talent, growing their viewership, and increasing their capabilities as a news organization, today they were totally outclassed by The Worldwide Leader and weren’t very graceful in defeat.

Kudos to ESPN and Mortensen on this one, as well as Jay Glazer who has been snubbed multiple times by ESPN, yet showed some class giving a competitor some love. With all the work that goes into digging up these scoops, it’s sad that people often try to duck who actually broke historical news like this.

Update: Jason La Canfora reputed our claim that credit wasn’t given. I admittingly changed the channel after about 45 minutes of coverage (Seinfield reruns ftw). In the time frame I watched, I didn’t hear ESPN or Mortensen credited although La Canfora chimes in (see below) that indeed they at some point they gave proper attribution of the scoop.  Perhaps one of our readers can chime in as to what time that occurred.

Let’s rewind the tape here as NFL.com has video of when the news broke on NFL Network found here. Just in case they pull the video here is how the story is introduced.

“Peyton Manning is soon to exit Indianapolis. Our Jason La Canfora reports today that the day that has been expected will come Wednesday as the Colts are making preliminary plans for a press conference. Jason says that according to a league source “to announce a parting of ways with their quarterback of 14 years.”

Given this video and the NFL.com’s article crediting La Canfora, I am not really buying that we wrongly accused NFL Network of ducking attribution on this scoop, at least initially.