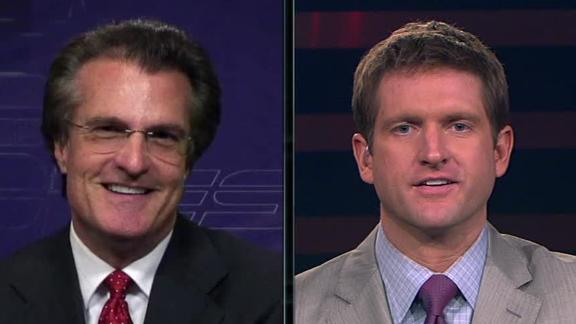 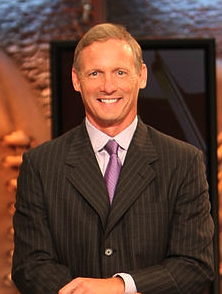 We can’t judge a draft class immediately, but we can judge the media peeps who spent more than 16 hours presenting, reporting and, well, judging the 253 players selected between Thursday and Saturday in New York City. So let’s do that with the NFL Draft Media Power Rankings. Not every on-air personality from ESPN and NFL Network is listed below, but these are the 25 most notable winners and losers from the weekend…

1. Mike Mayock: No shtick. No ego. And he’s less robotic than he was earlier in his career. Mayock has clearly emerged as the most well-rounded analyst in the draft business, and he was on point for all seven rounds this year. Plus, he constantly teased Rich Eisen for getting a manicure prior to Saturday’s coverage. He doesn’t need extra points, but for that, he gets them.

2. Charles Davis: For quite some time, Mayock was the most underrated analyst in football. Now that Mayock’s a superstar, Davis might have gained that distinction. He’s not necessarily quotable, but he’s funny and likable and it appears he can go toe-to-toe with the Mayocks and Kipers and McShays of the draft media world. It’s a shame he wasn’t on set during Round 1.

3. Paul Allen: The Seahawks owner hijacked the first half of Round 1, breaking almost all of the early picks and trades on Twitter before anyone else had reported them. And then he went silent and returned to life on his $162 million yacht. Any team owner that channels his inner Jay Glazer and Adam Schefter from out of nowhere has to earn major points on draft weekend.

4. Rich Eisen: He’s just so much smoother and wittier (Roger Goodell is now permanently “RG1”) than his ESPN counterpart Chris Berman. And while Berman has a fantastic grasp of NFL history, you get the feeling Eisen has a better knowledge of today’s NFL. Eisen was the first person to mention on either network that the league had, for the first time ever, a heat press machine backstage putting players’ names on jerseys as soon as they were selected.

5. Trey Wingo: The now annual chorus of viewers shouting for Wingo to host all seven rounds became even louder on Twitter this year. The under-appreciated Wingo seemingly gets better with age, while the opposite effect has hit Berman. Wingo’s balance of using humor, insight, and playing to his analysts is well-struck.

6. Trent Dilfer: Dilfer was brought onto ESPN’s main set on Day 3 and immediately made his mark with excellent analysis of the quarterbacks that were and weren’t taken and how they may eventually make an impact in the NFL. In talking about Kellen Moore specifically, Dilfer said he needed to be more than a “winner” to make it in the NFL, even speaking to how he met his end in the league in spite of winning games. The ability to go in-depth during the final rounds gave Dilfer a chance to be at his best.

7. David Shaw: The Stanford head coach was a natural on the NFL Network set as a guest analyst, combining in-depth analysis with a touch of levity and some apt comparisons during late-round coverage on NFLN.

8. Bill Polian: Polian isn’t quite a polished television analyst, but he doesn’t have to be to provide fresh analysis. His segments with insiders Mortensen and Schefter provided important perspective to viewers on not just the draft stock of players, but the thought processes of war rooms. It’s a wonder why he wasn’t involved in ESPN’s Day 1 coverage.

9. Adam Schefter: He had pretty much every pick first during Round 1, which I suppose means he delivered. He and Chris Mortensen also did a great job breaking down first-round trades on the spot. Schefter did a nice job telling Bruce Irvin’s back story after he was selected by the Seahawks and breaking down the difficulties that lie ahead for Dre Kirkpatrick after he was taken by Cincinnati. On Day 3, he even broke the news to the draft audience that Bulls PG Derrick Rose had torn his knee. Once a reporter, always a reporter.

10. Mel Kiper: He was sunk by the people around him, but still turned in his trademark effort. Mayock has become a star, but Kiper is still a draft mainstay. Kiper cuts to the chase better than any of his colleagues, but I wonder if the presence of Todd McShay on set would help him during the first round. Jon Gruden isn’t a good complementary piece, and he’s also not a worthy adversary.

11. Todd McShay: The addition of McShay to the ESPN set seemingly lit a bit of a fire under Kiper and the presence of two draft experts increased analysis and debate. You can argue as to McShay’s credentials, but he was a solid addition to ESPN’s coverage during the latter rounds, especially when it helps to have multiple angles on draftees few have heard of before.

12. Suzy Kolber: While NFLN went the sideshow route with Deion Sanders, ESPN at least threw a respected journalist on stage to interview players during the first round. There was still a lot of “How would you describe this moment?” crap, but Kolber at least found ways to get half-interesting answers out of some of the guys. I particularly liked that she creatively asked Michael Floyd about second chances after a somewhat turbulent tenure at Notre Dame. Kolber and Ron Jaworski also deserve a shout for their studio work later in the draft.

13. Chris Mortensen: Mort predicted early that there would be double-digit first-round trades. That happened before 20 players were off the board. There were a few times his interaction with Schefter wasn’t exactly smooth, but the alternate insiders set worked well.

14. Jason La Canfora: It was criminal that NFLN didn’t go to La Canfora and fellow insider Michael Lombardi more than about once per hour (even in the later rounds), because both offered a nice break from the Xs and Os and a broader perspective on what was taking place.

15. Steve Mariucci: Mooch brings stellar energy, but his analysis is too generic and he rarely goes out on limbs. Thus, the average ranking in our list.

16. Michael Lombardi: He didn’t offer as much insider information as his partner, La Canfora, but he did bring viewers the front-office perspective in the few opportunities he had to provide analysis.

17. Brian Billick: Billick joined the NFLN set on Day 2 of the draft alongside Charles Davis. He was sort of just there during the draft — rarely said anything groundbreaking, but rarely screwed up. Considering he was joined by #1 and #2 on our list, it was going to be tough to stand out.

18. Melissa Stark: A little awkward at times, and she rarely went beyond the basics, but I’ll take her over Deion Sanders any day of the week in interviewing the picks.

19. Les Miles: This is a tough one, because I liked the new flavor Miles brought to the NFLN broadcast. Consider that the SEC had 42 players chosen — more than any other conference — and few people know SEC football like Les Miles. The problem was that he’s unpolished as a television analyst, and he lacked clarity while struggling with his delivery. I still think it was worth it for NFLN to throw him in there though.

20. Jon Gruden: Where do I begin? The always present eternal optimism? The nonsensical comments that plagued his Round 1 analysis? What about the predictions he continually made on picks that had already been made and reported? At the draft, Gruden has a chance to be critical for once without pissing off potential future employers, but he still continues to hate nothing and nobody. It also felt as though he was reading from a script prepared by someone else throughout the broadcast. When he attempted to speak extemporaneously, he gave us gems such as “I don’t know anything about the draft process” and “If you have Trent Richardson, you’re going to do what Trent Richardson can do.” I liked that he was somewhat critical of Ryan Tannehill and Quintin Coples, but those were gimmes.

21. Herm Edwards: Edwards made an impression during the draft weekend for his loud analysis. Seriously, every time he was on screen, Herm felt the need to scream whatever he was saying at me. I get it, that’s his thing, but after a while all I wanted to do was reach for the mute button when he appeared on screen, or at least get ready to turn the volume down.

22. Marshall Faulk: Neither Faulk nor Michael Irvin added anything of relevance to NFLN’s first-round coverage. They were essentially there to give Eisen, Mariucci and Mayock opportunities to take sips of water and catch up on their notes. I watched the entire first round live on NFL Network and legitimately can’t recall a single interesting comment from either one of them. It actually took me some time to remember who else was on set with Eisen, Mayock and Mooch. 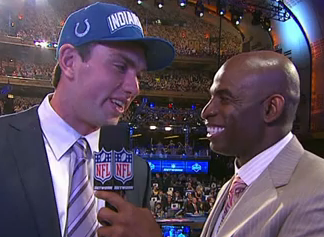 24. Deion Sanders: He actually did a decent job in his interview with Robert Griffin III. The rest was just cliche-inducing vanilla questioning. I don’t expect hard-hitting Mike Wallace-type questions on the draft stage, but Deion made no effort to ask anything remotely unique. Also, too many questions about friggin’ clothing. Oh, and too many questions that weren’t actually questions.

25. Chris Berman: Is there anyone out there who still enjoys watching or listening to Berman? The guy had his day, and it has passed. The shtick is beyond irritating at this point. I don’t blame him for the awkward lulls that filled the first hour of ESPN’s inexplicably commercial-free coverage Thursday night, because Gruden was leaving Berman and Kiper on islands, but that still doesn’t get him out of last place. Why can he still not stop tipping picks? Why does he still have to reach for awful nicknames (“Spiro” Egnew? Really?) It must be an ego thing. ESPN has to begin to phase Berman out at some point, it’s beyond time.