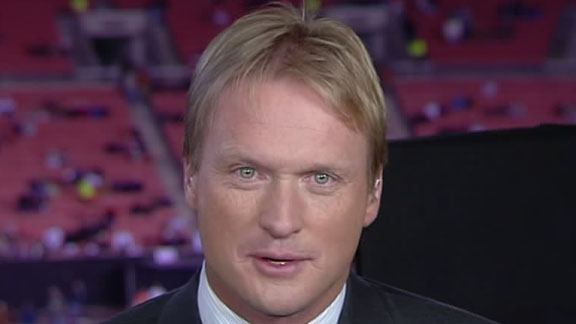 There was reported a crazy rumor recently that Monday Night Football analyst and former Super Bowl winning NFL Head Coach Jon Gruden was offered the University of Tennessee job, along with a Cleveland Browns' ownership stake. All parties involved promptly disputed the report, with Gruden saying "I'm just excited about Monday Night Football. I like what I'm doing. I'm just trying to hang on to the job that I have."

Of course, that doesn't mean these crazy rumors won't keep appearing. On the contrary, they will probably keep on popping up until he actually does leave and return to the NFL. And as it so happens, the latest one gaining steam on outlets like CBS and PFT has him returning to coach… the Oakland Raiders. The rumor originated from an interview Pro Football Weekly's Hub Arkush gave to WSCR Radio in Chicago.

This would be his second stint as the Oakland Head Coach, as he first coached there from 1998 to 2001, before leaving for Tampa Bay where he won the Super Bowl in 2002. It seems rather absurd that he would return to once again coach the now dysfunctional Oakland franchise, especially with how in demand his services have been rumored to be the past few years. I can't see it happening, but perhaps if the money is right you never know.

And once again, another Gruden coaching rumor was quickly squashed as Pro Football Talk had a statement from the Raiders PR chief being “disgusted” by Arkush spreading this Gruden rumor on the day current Raiders Coach Dennis Allen’s father died:

“Members of the media, there are two people on this planet that have the ability to make talks happen between Jon Gruden and the Raiders, with regard to him allegedly taking over the football operations, and/or the position of head coach.  Each of those individuals, owner Mark Davis and general manager Reggie McKenzie, wanted me to communicate that this rumor has no validity whatsoever.  And for the record, I’m personally disgusted that Hub Arkush would spread such an untruth on the day our head coach, Dennis Allen, had to determine with his mom, his brother and sister, whether to take his dad off life support or wait and hope that he would regain consciousness.  Dennis didn’t have an opportunity to say goodbye to his dad, but he did have an opportunity to take a phone call regarding Hub’s story.”

Gruden saying he's committed to ESPN is doing nothing to quell reports of his imminent departure from ESPN at the moment. And Gruden does seem to be rather unpredictable, so it wouldn't surprise me if anything happened at this point. He's been rumored to take the job at Tennessee, now the Raiders, and probably anywhere in between. The only thing we can really be sure of is that the rumors will keep flying until he finally does leave the MNF booth. Stay tuned, it could be a wild ride.