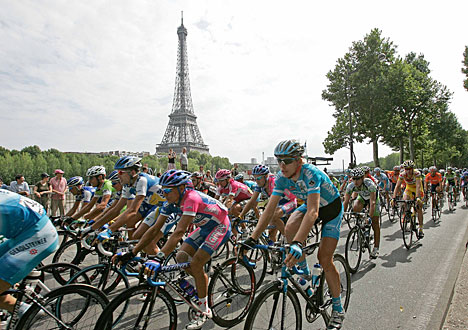 Eight hours of live Tour de France coverage, long a cornerstone of NBC Sports Network programming when it was Versus and the Outdoor Life Network, will be moving from NBC Sports to NBC this summer. NBC will also be airing taped coverage of the first and final stages of the Tour.

All of the Tour coverage will take place on weekends, with the taped events coming in two hour blocks on July 1st and 22nd, and the live events happening on July 7th and 8th. The two live races, the seventh and eighth stages of the Tour, will take place from 8 AM until noon. The first stage will be aired in a condensed tape delay from 4 to 6 PM, and the final stage will air on a condensed tape delay from 1 to 3 PM.

NBC Sports Network isn’t totally screwed though, as the network will continue to air a whopping near 14 hours of coverage during each stage of the race. I honestly don’t know how in the hell they’ll be able to squeeze 14 hours of coverage out of each stage, but this is an experienced team covering the event.

At first, this seems like a pretty big blow to NBC Sports Network, but at the end of the day, it’s only two live stages that they’re losing. The problem is that those two stages are coming on a weekend, where more people would be likely to tune in. Exacerbating the point is that the two stages are both mountain stages, which are more competitive and as a result, more entertaining.

This move can only benefit the Tour de France though, as the event will sure draw more viewers on broadcast TV as opposed to a second-tier cable network. As for NBC’s logic behind the move… maybe they wanted to give the Tour a nice push by featuring some of its more entertaining stages on NBC, with the hope that more people will click over to NBCSN during the rest of the Tour to watch more stages, and give the struggling network a ratings boost.