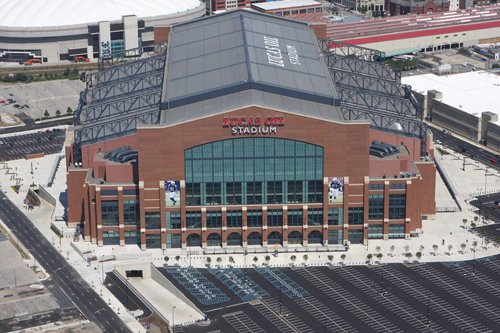 NBC released a listing of various Super Bowl tie-ins for the programming on its variety of networks next week, and honestly, some of them are quite ridiculous. I'm all for dedicating all of your general sports studio shows to the game, but NBC Universal is going all out this year on seemingly every single one of their platforms. Take a look at some of these tie-ins…

Seriously? THE Jimmy Fallon is bringing his mediocre talk show on the road, and he chooses Indianapolis as the destination? Awesome. When Conan took his show on the road, he went to Los Angeles… you know, a big city that's known for entertainment.

This is Lucas Oil Stadium, where the game will be held. Notice anything interesting about it? Yeah, it's got a roof. So if the weather in Indianapolis is terrible during the week, they can just… take weather out of the equation by closing the roof, which is what I assume they'd do anyway. I really have no idea why Weather Channel reporters are reporting on weather for an indoor event.

Feherty's appearance on CBS during the divisional games was strange, and it's a little stranger that the Golf Channel stalwart will be doing more NFL related stuff… for a channel that has nothing to do with the NFL. If you're tuning into the Golf Channel during the winter months, don't you think you'd be doing it to get away from nonstop football talk? Regardless, we can't hold any ill will towards Feherty, an AA favorite.

E!: The nation’s premier destination for celebrity and entertainment news will report from Indianapolis Wednesday through Monday with correspondents Catt Sadler and David Burtka.

Is there really going to be a lot of breaking entertainment news from Indianapolis, the home of… what, exactly? I know some celebrities will be heading to the game, but I don't think it's worth sending a couple of correspondents there. Then again, maybe we can get a hold of the complete list of media outlets given credentials, and analyze the most bizarre ones of the bunch.

The perfect tailgate food isn't "prepared" or "created," it's usually grilled. Just bust out the RV with the 30-foot long grill and massive TVs, and we're good to go. I don't need Michelin starred chefs creating some sort of magical concoction when all I really want is a hot dog (or brat, or chicken, or burger, or whatever your poison is) and an ice cold beer.

Access Hollywood: The No. 1 entertainment show will be on-site in Indianapolis with reports on all Super Bowl festivities Tuesday through Monday.

See my comments for E! What exactly do they mean "Super Bowl festivities?" The insane amount of parties held by players with copious amounts of alcohol and chicanery present?

Oh thank god, I'm going to learn how to plan a Super Bowl party. Joe's helpful hints: get an awesome entertainment center and a ton of snacks. I'm not going to care about your amazing house and bathroom decor, or the presentation of the food… just give me some grub, and the game.

iVillage: the largest content-driven community for women online, will feature VIDEOS and profiles on wives of NFL players on
how they achieve family balance with the hectic schedule of the NFL. iVillage will also feature stories on Super Bowl community
and philanthropic events throughout the week. The iVillage community will participate with their Super Bowl content through
activities and discussions on the iVillage social media pages.

Because tips on how NFL wives balance their family lives are so useful for normal, every day housewives.

I would have never known that the NFL's championship game was airing until I saw it on top of that taxi cab!

This says nationwide, which means in America. How is it reaching 600 million viewers when America's population is half that? Are they counting eyes twice? If so, why would that count as an extra viewer when they've already seen it before?

I understand that the Super Bowl is the premier sporting event of the year, but this is a little overwhelming. The fact that both teams involved are located in the northeast, in cities that are largely reviled in sports terms by the rest of the country, isn't going to give the casual viewer any more incentive to watch the game aside from "It's the Super Bowl!!!" All the tie-ins that NBC has with their oodles of shows and networks seems excessive, especially for those of us that just want to get the hell away from the hype surrounding the game.