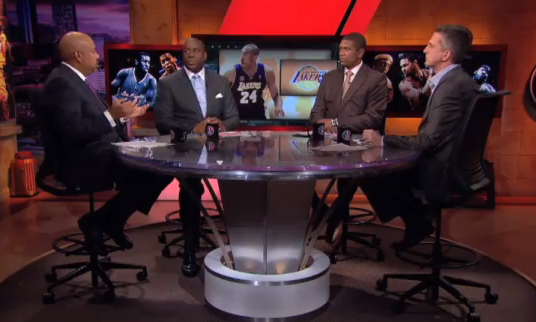 If you're anything like me, you probably watched more NBA basketball yesterday than you have for the entirety of the regular season thus far.  There's something about the Christmas Day showcase that makes it the unofficial start of the regular season, at least in the consciousness of a sizable swath of sports fans.

So for me, this was the first time to really check out ESPN's revamped NBA studio crew.  ESPN & ABC had all five NBA games yesterday and the crew was on the air from noon past midnight.  Last year, the foursome was fearful for anyone who decided to tune in for much of the year.  ESPN went with an experimental hostless format with Mike Wilbon, Chris Broussard, Jon Barry, and Magic Johnson.  The results weren't pretty.

Before this season began, ESPN rebooted.  Out went Barry and Broussard and in came online king Bill Simmons and rising ESPN star Jalen Rose.  While still not yet on the same playing field as Turner, the results were much improved.

Even though half of the studio has been changed, you can already tell the chemistry on set is miles beyond what it was last year.  Surprisingly, the man with the least TV experience is the key cog.  There were plenty of questions about Bill Simmons as a consistent television personality, but he's appeared much more comfortable in front of the cameras since those first guest hosting spots on PTI when he looked as frightened as a paternity test participant on Maury.

With this group, Simmons can do what he does best – talk basketball.  And even without a concrete "host" as yet, everything flows more naturally out of the conversation created by Simmons and Rose.  Simmons even drew a couple interesting comments out of Magic Johnson!  That's how you know these changes have worked, and people are noticing.

Retooling can often be more difficult than creating. Everybody knew their role today; show was smart. @espnnba #NBAXMas

Now is this foursome perfect?  Of course not.  Jalen Rose has turned into one of ESPN's most reliable options as an analyst, but he shouldn't be the one leading the group in and out of breaks and serving as de facto host – it should be Mike Wilbon.  Rose's cadence can make those transitions awkward at times and there's still a few times when the flow of the show stops.  There really is no reason for the PTI co-host to not serve as the point guard for the NBA studio crew, but hopefully that's an adjustment that comes down the road.  There's also still too much reverence for "Earvin" but at least it's a bit more stomachable this year.  That, or I've just grown numb to it at this point.

On the whole though, the positive signs of growth are there for ESPN in Year 2 of their commitment to building an NBA studio brand that could rival Inside the NBA.  Give the network credit for acknowledging the original lineup wasn't working and being willing to make the necessary changes to get it right.  It should give hope to the people at Fox who are looking at the same difficult questions after a tough debut year for Erin Andrews and their college football studio show.  With the right modifications and corrections, a quick turnaround can be made.