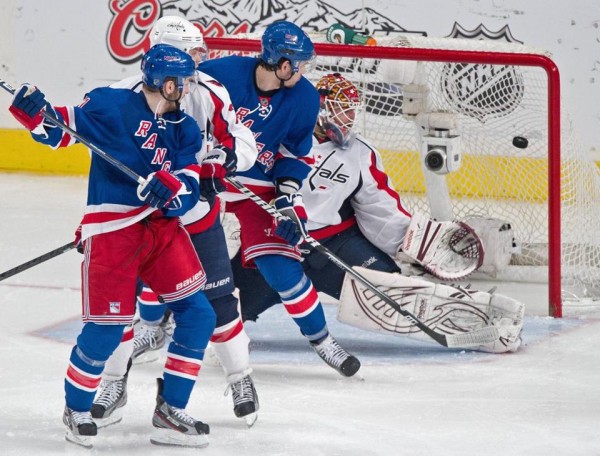 The NHL and NBA are experiencing quite different ratings patterns as their playoffs roll on. The NHL has been breaking ratings records left and right in this playoff season, while the NBA is down from last year, some series more significantly than others.

The Conference Semifinals on NBC Sports Network have been up 48% in comparison to last year, averaging 1.227 million viewers per game. Monday’s Game 5 between the Capitals and Rangers was up 143% from last year’s Canucks-Predators Game 6, drawing nearly a million extra viewers. You can atttribute that to the strong, traditional northeast markets involved in the game. In fact, the 4.32 rating the game drew in New York was the highest ever in the city for an NBCSN game. But it’s not just all Rangers in NYC: the Devils-Flyers Game 4 on Sunday drew a 2.37 rating in NYC, the highest ever for a Devils game in the city. Overall viewership for the Flyers-Devils game was virtually identical to the viewership for last year’s Red Wings-Sharks Game 5, and comparable to the Rangers-Capitals game on Monday.

As for the NBA, things are going in a different direction. With many of the series being lopsided, nine games that took place over the weekend on ESPN, TNT, and ABC were down in comparison to the comparable game last year. The biggest weekend drops came in Saturday’s Spurs-Jazz Game 3 on TNT (down 32% from Thunder-Nuggets last year on ESPN), and Saturday’s Pacers-Magic Game 4 on TNT, down 43% from Pacers-Bulls last year on TNT.

The lone bright spot of the weekend for the NBA was Game 4 between the Thunder and Mavericks, which was up 8% from last year (Spurs-Grizzlies Game 3), and a whopping 75% from 2010 (Hawks-Bucks Game 3). Overall, 11 of the first 16 games that have aired on TNT this playoff season are down from last year. Yikes. This comes as a major surprise given the NBA’s numbers were up across the board during the regular season in spite of the lockout.

The NBA’s raw numbers are still crushing the NHL’s, but you can attribute that to distribution as opposed to game quality. There’s just no comparing the cable outlets of TNT and ESPN to NBC Sports Network. Things might start getting interesting for the NBA in the coming weeks, with defending champion Dallas eliminated and a large marketin Chicago on the brink of elimination, with another large market in New York getting booted last night. However, quality of individual games and series should increase dramatically. As for the NHL, the league could have a pair of odd matchups in the Conference Finals.  In the West, you have two large, fairly non-traditional hockey markets in Los Angeles and Phoenix meeting.  In the East, you could have the coveted New York market covered, but that’s it, with a possible Rangers-Devils matchup if New York beats Washington in Game 7.

Things are about to get very intriguing for both leagues, and we’ll learn a lot more about viewership over the next week or two.