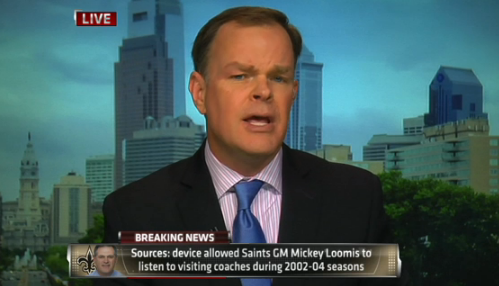 Way back when columnists were suggesting Gregg Williams be thrown in jail and the media was slurping up the BountyGate shock and horror fed to them by the NFL, ESPN went all-in with an explosive report further condemning the New Orleans Saints organization.  An Outside the Lines expose by John Barr alleged Saints GM Mickey Loomis could secretly listen to opposing coaches.  The report was of the utmost seriousness.  Not only could listening in on opposing coaches lead to an NFL version of the death penalty for Mickey Loomis, but these were possible federal crimes alleged as well.

At the time, ESPN gave the OTL report top billing.  It was put into the ESPN echo chamber on TV, radio, and especially online where additional columns and blog entries appeared reflecting on the significance of the report.  However, the OTL report was immediately met with pushback due to lack of tangible proof.  There were even reports out of New Orleans that Barr was looking for skeletons in the Saints' closet and wasn't leaving town until he found them.  The truth is that ESPN walked a tightrope with the Barr report given the seriousness of the allegations and lack of physical evidence… and ESPN just fell off.

Now, the spotlight needs to turn to ESPN and John Barr as the Louisiana State Police released the findings of their own investigation and revealed no evidence against Loomis.  Loomis was cleared of any wrongdoing by the police.  Mike Triplett of the New Orleans Times-Picayune puts the latest developments, and ESPN's role in the story in perspective:

It wouldn't be fair to completely discredit ESPN's reporting, which cited unnamed sources, because only ESPN knows for certain how well it vetted those sources. And the network, especially its investigative arm at "Outside the Lines," has a strong reputation for journalism.

However, there are strong indications that ESPN lowered it [sic] journalistic standards on that report. For one thing, there were numerous reports that ESPN reporter John Barr was in for weeks asking several sources for any negative information about the team before it found the wiretapping whistleblower. For another, the timing seemed awfully fishy when ESPN then reported that the local U.S. Attorney's Office had just learned from an informant about wiretapping allegations from seven years earlier.

Buried in the original story was the line, "Outside the Lines could not determine for certain whether Loomis ever made use of the electronic setup."

As Loomis and the Saints initially denied the report and even floated the idea of legal action, ESPN slowly backpedaled away from the story.  Over the last few months, there's been radio silence from ESPN regarding the matter.  An ESPN.com search of "Mickey Loomis eavesdrop" shows 5 results from April 23-24 and 1 result since.  Search results about wiretapping show a similar pattern.  John Clayton had to go on air last night and call the original report from his own network "unplausible."  Unplausible.  Where was that language in April from Bristol when ESPN.com's Mark Kreidler was writing this?

John Barr was conspicuously quiet regarding the latest developments according to Larry Holder of the TP:

ESPN reporter John Barr said he had no comment on anything at this point. Wasn't aware of La. State Police presser on #Saints eavesdropping.

Luckily for ESPN, they can't necessarily be proven wrong here, but the network put its journalistic integrity on the line once again and it has to answer some serious, serious questions once again.

What was John Barr's motivation?  What was ESPN's motivation?  Were they going to find something negative to report on the Saints to pour gasoline on the BountyGate fire regardless of facts?  Were these sources properly vetted?  Why has ESPN not followed up on the initial OTL report?  Why did ESPN feel comfortable publishing these significant allegations without evidence?  What is ESPN's response now that no evidence has turned up against Loomis?  Will there be an apology, a retraction, or even a lawsuit from Loomis?  Is Poynter following this at all?

Make no mistake, this Saints wiretapping report is quickly turning into as big of a journalistic black eye for ESPN as Bruce Feldman and Syracuse were.  It used to be that an Outside the Lines report was the best in sports journalism.  Not anymore.  Not after the last year.  How ESPN could run with a report so heavy on accusations and light on facts is still utterly baffling.  How ESPN could heavily promote a report with unprovable accusations from unnamed sources on behavior from almost a decade ago is, as John Clayton said, unplausible.  These were serious, serious allegations against Mickey Loomis and the Saints franchise, and they were built on paper thin evidence.

You expect that kind of risky, cavalier, shaky journalism from the National Enquirer.  You'd hate to have to expect it from ESPN, too.