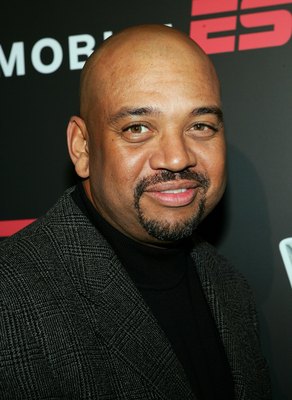 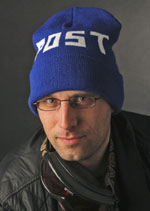 Wilbon vs Steinberg.  PTI vs DC Sports Bog.  Two generations of Washington Post stalwarts clashing over the hearts and minds of Washingtonians.  A back and forth battle that made Wednesday night's debate look like "A Moment With Jim Tressel."

Get your popcorn ready, this is a definite fight of the year candidate.

The genesis of this galactic showdown was the latest issue of ESPN The Magazine, which was another city-centric edition focusing on Washington DC.  While I'm not a fan of the concept of devoting a national sports magazine largely to one city, hey, at least it's not Boston.

In the issue are several articles about DC sports and also perspectives about the city and being a sports fan there.  Enter Mike Wilbon.  The PTI co-host served as a Washington Post columnist for 20 years, and yet he took the position of labelling Washington DC a "terrible" sports town in ESPN The Mag.  Wilbon's comments were reported on DC Sports Bog by Dan Steinberg:

“If you’re going to really look at the DC sports scene, what’s more important than the Wizards and Capitals to people are Maryland and Georgetown. But think about this: When’s the last time you’ve seen anything that happened in DC lead SportsCenter? RG3 is the first time that’s happened in years. So DC, the center of the sports universe? Never, never.”

In the same column, Steinberg took umbrage with Wilbon depicting Washington DC as a terrible sports town.  The whole "great sports town" debate is incredibly worn out and tiresome, which is all the more ironic that it set off such a raging inferno.  Why a city has to prove itself as a "great sports town" to instill some sort of grand sense of self-worth is beyond my capability of reason.  I don't see any streets filled with the masses in face paint and jerseys yearning to be named by whoever decides these things as "a great sports town."  It's almost as annoying as the conference supremacy debate.  Just cheer for your team and get on with your life.  Yeesh.

Apparently, Mike Wilbon is one of the people that decides these things (congrats, by the way) and it didn't please Dan Steinberg.  While being deferential to Wilbon, the present Post columnist called out his predecessor for unnecessarily trashing Washington DC fans.

"Wilbon was never anything but a prince to me, and was always far kinder than he had reason to be. But I’ll never understand why he seems to go out of his way to antagonize the fans and readers who helped turn him into a national star. Is D.C. the greatest sports town in the world? Clearly not. Is it worthy of repeated trashing? I don’t see why that would be the case."

A fair point.  You'd think that'd be the end of the debate, but we're just starting this slugfest.

Here's where business picked up, with a run-in by an ESPN anchor.  SportsCenter anchor Bram Weinstein was also featured in the DC issue of ESPN The Magazine, albeit with a much more positive perspective.  Weinstein is a DC native who covered the Redskins before joining ESPN.  He also criticized Wilbon in a tweet to Steinberg, but did so with the gloves firmly removed…

Carpetbagger (n): = outsider; especially : a nonresident or new resident who seeks private gain from an area often by meddling in its business or politics

It was one thing for Wilbon to trash DC as a sports town, it was another altogether to start talking about the ability for those same people to call the city home.  Weinstein calling Wilbon a "carpetbagger" is a charged term that gets to the heart of the matter.  Wilbon isn't one of them in DC.  He's a native Chicagoan who worked in DC most of his career and has since moved out West.  The funny thing is, you can actually see where all three guys are coming from in this battle.  Wilbon not afraid to tell the locals how it is and the Steiner Brothers defending the town they've lived in, worked in, and grown fond of.  Alas…

Round 4: Wilbon Backs Off DC, Doubles Down On Steinberg & Weinstein

After the commentary from Steinberg and Weinstein became public, Wilbon took to his Facebook page to backtrack on some of his comments about Washington DC.  He wisely steps back from the ledge on social commentary regarding the city's residents, but plays loose with the facts regarding his own quotes.  He didn't just say DC wasn't the best sports town, he said it was "terrible."  Regardless, he also took the occasion to fire a couple haymakers at both Steinberg and Weinstein for their comments and "whining like little babies."

Now's a good time to get a refill on that popcorn.

"Greater Washington, D.C. is a wonderful place to live; I know because I've been here more than 30 years. It is NOT the country's best sports town, not close. I was quoted as saying that in a current issue of ESPN The Magazine and am taking a lot of flack for it, which is fine. But it's annoying as hell that a couple of colleagues, Dan Steinberg of The Post and Bram Weinstein of ESPN, felt the need to whine like little babies because I didn't speak a company line that agrees with their hypersensitive feelings."

"Weinstein, who is a very talented anchor, demonstrates his professionalism by calling me a "carpetbagger" as if the job of a columnist–and that's what I was for 20 years at The Post–is to simply tell readers/viewers/listeners what they want to hear and make excuses for local readers regardless of the reality of a situation. I'd like to think Bram can see the value of saying something that isn't cheerleading, or making what's seen as a critical observation…but maybe he can't. Maybe he's afraid to offend his homies…which is part of the problem with mainstream media now."

"Steinberg occupies a position that is very dear to those of us who've held it over the years: sports columnist at The Post. If all he wants to do is be popular–and I think Dan is better than that–then the readers of The Washington Post sports section won't be very well served. Telling readers how great they are as sports fans was never one of my priorities. The only thing worse than people who can't stand to hear an unpopular or unflattering opinion is those that are too afraid to state one."

By far the biggest barrage landed so far.  It's rare that you see one media member call out another so bluntly, let alone one ESPNer after another.  (To Wilbon's credit though, he's never been shy about criticizing Bristol.)  Wilbon's comfortable playing the truth-telling, hard-hitting columnist in this case and he knows it.  His point is well taken – there's a lot of room between the Hawk Harrelsons and Jay Mariottis of the world.  But, Wilbon also get points docked for using his Facebook page.  His biting words lose their luster next to an ad for Farmville and annoying sponsored links you want nothing to do with.

Now that things had gotten serious, Steinberg's next move was to carefully target Wilbon where he showed weakness.  He jumped at the chance to say Wilbon "reversed his course" and rebutted the PTI host point by point.  While not delivering the blunt force of Wilbon's Facebook strike, Steinberg's next blog entry was a masterclass in the pen being mightier than the sword.  This was a classic case of Steinberg outboxing a fighter… except with words instead of like, actual fisticuffs.  (For the record, Weinstein also put together a lengthy response to Wilbon's comments on a personal site that's worth a look.)  Steinberg took the high road, played the populist card, and even took a couple shots at Wilbon in one fell swoop…

"Of course, Wilbon chose to cover up his embarrassment at so quickly retreating from the “terrible” description by taking repeated shots at Bram Weinstein and me, which is cool. I get it. Changing the subject is a perfectly appropriate way to divert attention, and one I’ve frequently used."

"I think it’s great that Wilbon is still willing to speak truth to power between rounds at Columbia, celebrity roasts and expense-account lunches with Earvin. My only counter would be that it’s cool to speak truth to power when the power is a team owner, or a sports network, or a washed-up quarterback living on past accomplishments. Flaming ordinary sports fans in your town for not being passionate enough strikes me as a less noble journalistic mission."

The deliciously subtle dig by channeling Wilbon and referring to ESPN cohort Magic Johnson as "Earvin" was well played.

Wilbon was against the ropes.  He had backed off substantially from his original comments and had been effectively neutralized and cornered by Steinberg.  He was left with one choice.  An all out assault that attacked Steinberg on a professional and personal level.  When I read this Facebook post from Wilbon, I felt like I did when I saw Mike Tyson set his sights on Evander Holyfield's earlobe.  Shock.  Astonishment.  Amazement that Wilbon would take this fight to a place where he actually called Dan Steinberg a "slovenly bum" for what he wore to Abe Pollin's funeral amongst other niceties… 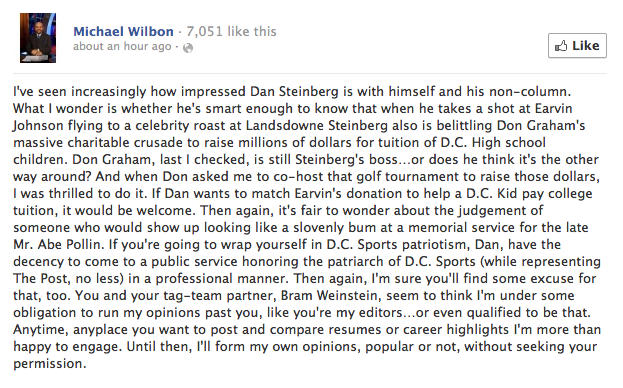 Boy, that escalated quickly, I mean that really got out of hand fast.

Immediately sensing that the previous post was a bit of an overreaction, Wilbon quickly posted this apology on his Facebook wall (forget that hideous, newfangled Timeline)…

"Looking at my own Facebook post and tweet from a couple of hours ago I realize I got too angry in my response to what I feel is a personal attack on me…and absolutely went too far in criticizing Dan Steinberg for what I thought was inappropriate appearance at a memorial service for Abe Pollin. I should never, ever address another person's appearance and apologize to Dan and anyone else who might object to my characterization for doing so. Even in a public dispute, which I won't have any further part in, that characterization went too far…"

For the record, Weinstein also bowed out of his supporting role at this point as well, effectively ending Capital Combat 2012.  In addition to attacking Steinberg's choice of funeral dress, the "pull out the resumes" card devolved this into a sophomoric pissing contest.  At least number of Twitter followers wasn't invoked.  The apology and de facto white flag was the right move in the end.  Wilbon knew he went way over the line, and he's been subsequently crushed (and then some by Drew Magary, sweet Jesus!) in the aftermath.  As of late Thursday night, Steinberg hadn't responded on his Twitter page or DC Sports Bog, which is also probably the wisest course of action after such an intense conflict.  Surely, ESPN and The Washington Post will be happy this exchange didn't end in complete and total annihilation as well. 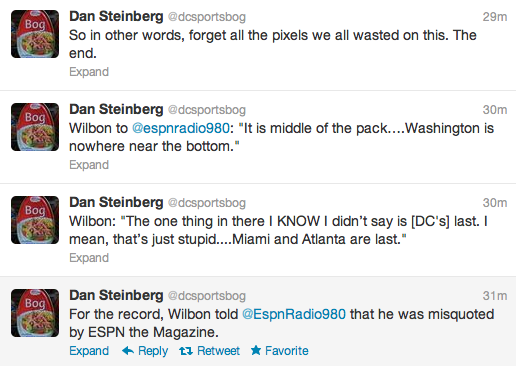 An epic confrontation of Washington DC sporting titans that will live long in the memory.  But as the dust settles there is only one clear winner today…