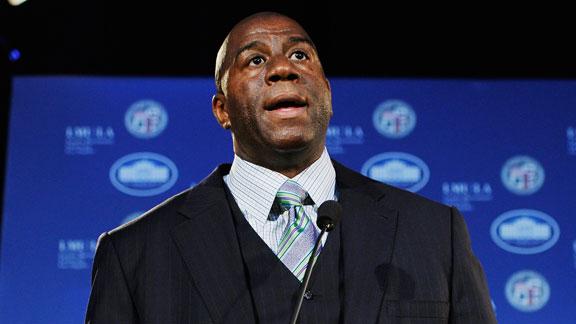 This year ESPN has centered their NBA studio coverage around Magic Johnson.  Johnson’s star power and close relationship with the Lakers and Los Angeles has been a focal point throughout the season.  ESPN’s main NBA studio was even moved to Magic’s backyard in LA at the beginning of the year so he could appear as an analyst for the whole season.

Magic Johnson was a great player, he’s a great businessman, and he has a great story to share.  However, he has never been a great television analyst.  The unorthodox format to ESPN’s studio show, with no traditional host and four analysts, hasn’t helped matters.  Magic’s name recognition definitely outweighs what he brings to the table, whether it be breaking down a game or heaven forbid doing highlights.

In his analyst duties this weekend though, Magic walked into a quagmire of his own making with comments aimed towards current Lakers head coach Mike Brown.  However, it wasn’t just those comments that raised eyebrows, it was the massive conflicts exposed by them and the tough spot both he and ESPN are in with his work at the network.

After a Game 6 loss to the Nuggets in their first round series, Magic said Friday night Lakers head coach Mike Brown would be fired if Los Angeles lost Game 7 at home as told by the LA Times:

“They’re going to run Mike Brown first out of town,” Johnson said as an ESPN NBA analyst Friday. “Then second will be [Andrew] Bynum. Then third will be [Pau] Gasol.”

That would be quite a strong prediction for any analyst regarding any team in the league, but Magic Johnson has never been just any old analyst, especially when it comes to the Los Angeles Lakers.  Johnson was a player, a coach, and from 1994-2010 had an ownership stake in the team, reported to be at 4.5%.  When Johnson sold his stake in the team, he proclaimed himself to be a “Laker for life.”  But wait, that’s not all!  Even though he doesn’t own part of the team anymore, Johnson is still a Lakers Vice President.

Perhaps Johnson’s role seems only ceremonial these days, but that’s not what the Lakers themselves say about Magic’s position with the team.  A look at the Lakers Media Guide for 2011-2012 shows Magic Johnson listed in the program before any Lakers executive except Owner Jerry Buss.  According to Johnson’s bio in the media guide, he works closely with GM Mitch Kupchak and is “actively involved in various management areas”…

“Johnson, 52, assumed his post-playing-career position with the Lakers on June 27, 1994, the same day in which he purchased a minority interest in the club from Dr. Jerry Buss (which he later sold on October 18, 2010).  In his current capacity, Earvin is actively involved in various management areas which include working with Mitch Kupchak on player-related issues and overseeing various marketing and public relations functions.  His incredible understanding of the game and expertise are invaluable assets to the Lakers organization.”

Don’t you think this would add more legitimacy to what he has to say about the potential personnel moves of… the Lakers?!?!  Let’s break this down then – you have a Lakers executive telling a national television audience the team’s head coach would be fired if the Lakers were to lose a game.  To add to the absolute absurdity, the Lakers had to release a statement contradicting their own VP and attempting to circle the wagons:

“The opinion expressed yesterday by Magic Johnson regarding Mike Brown was his personal opinion and was made in his role as a TV analyst. His words were not made on behalf of the Los Angeles Lakers, and in no way do they reflect the feelings or position of team ownership or management. We are fully committed to and supportive of Mike Brown as head coach of the Lakers.”

And therein lies the problem for Magic Johnson, the Lakers, and ESPN.  When exactly does Magic Johnson take off his Lakers VP hat and put on his ESPN NBA analyst hat?  How can Magic Johnson not represent Lakers ownership and management when he works for the team?  Given his close affinity to the franchise and his continuing role with the team, his words about the Lakers are always going to carry more weight.  It’s ludicrous to think otherwise.

Come to think of it, it’s amazing that Johnson’s inherent conflict of interest with the Lakers hasn’t been a larger topic of discussion until now.  Perhaps we’ve just all accepted it as part of who he is, even though the issues at hand are numerous.  Simply put, it’s impossible for Johnson to give fair analysis about the Lakers.  When is the viewer to know when Johnson’s Lakers perspective is coming from inside the team or not?  If Johnson is overly protective, then it appears as Lakers bias since he works for Lakers management.  If he’s overly critical, as in this case, then the organization has to clean up a huge mess.  Imagine being Lakers coach Mike Brown and hearing your Vice President just “doing his job” and saying you’ll lose yours.  And you thought he had it bad with LeBron James in Cleveland!  Yeesh.

This Mike Brown charade only goes to prove that we have no idea what to trust from ESPN and Magic Johnson when he speaks about the Lakers.  What does ESPN do the next time Johnson goes out on a limb?  What do the Lakers do?  It’s a Pandora’s Box that doesn’t even need to be opened, but the decision has been made in favor of Magic’s name value, access, and star power over the legitimate issues they present.

It’s almost too bad the Lakers actually won that Game 7 Saturday night against the Nuggets.  It would have been nice to see how prescient Johnson’s “analysis” truly would have been.  Oh well, there’s always this Lakers/Thunder series to look forward to…