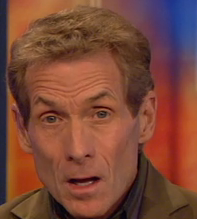 First Take’s Skippy Bayless has turned his bright, crazed, Howard Beale-esque spotlight onto Oklahoma City Thunder PG Russell Westbrook in recent weeks.  (Hey, there’s only so many days in a row you can talk about Tim Tebow for two hours each morning, every day through the NFL offseason.)  One of the more bizarre moments in Skippy’s attacks on Westbrook was when he pointed to his own “decorated” high school basketball career.

Anyone that goes straight to their glory days in high school several decades ago for any sort of contemporary argument probably doesn’t have a leg to stand on in the first place.  Seriously, that guy that talks in a braggadocious way about their greatness in high school is one of the worst people in the world.  For one of those people to also be Skip Bayless, well, that’s just all kinds of terrifying.

Well, The Lost Ogle did some fantastic investigative work and checked in to that story of Skippy’s to tell it again.  This time though, they told the truth and discovered Skip Bayless’s tweets were a blatant falsehood.  We’re not talking about a fish story that grows gradually over time, but an absolute lie.  For a man that makes a living on commentary that walks the tightrope between real and fake, the extent of Skip’s lie is surprising.

The Lost Ogie discovered through newspaper reports and Bayless’ yearbook that Skip averaged a paltry 1.4 PPG for 20-2 Northwest Classen High School in 1970.  Last I checked, 1.4 PPG makes you Stilman White and not Pete Maravich…

Sports by Brooks went another step and proved Bayless didn’t even register a statistic in the team’s state final game in Skippy’s senior year.  Bagels across the board.  On the bright side, Skip Bayless would be welcomed into Club Trillion if that happened today.

Remember, Skip Bayless was trying to compare himself to Russell Westbrook as a shoot first point guard.  A shoot first point guard that just happened to score by far the fewest points on his team.  This stunt from Skippy is even more offensive than 1,000 days of jamming nonsensical screams of demogaugery down the nation’s throat only due to the stupidity it takes to lie about something as irrelevant as your high school basketball career.

Seriously, the fact that Skip went to his “I WAS A BIG DEAL IN HIGH SCHOOL” tweet in the first place was laughable.  The fact that it turned out to be a lie is just sad and pathetic.  I’m sure ESPN and First Take and Bayless will just go on in their own little alternate universe like this information was never unearthed.  Operating in their own alternate universe is First Take’s modus operandi after all.

But hopefully, if you needed any more ammunition to discredit anything that comes out of Skip Bayless’ wordhole as truth, surely this is it.  He’s more of a cartoony super villain than an honest sportswriter.

Why would Skip Bayless lie about something so silly, so inconsequential, so trivial?  Is he truly delusional?  Does he have the largest inferiority complex known to man?  Why tell such a stupid lie when the point he was trying to make was unnecessary in the first place?  It makes no sense at all… even for Skip Bayless.

Perhaps Skip’s months of obsessing over a backup QB, I Heart Skip Bayless t-shirts, inane hashtags, and phony debates has caught up with him.  Now that his fake Hoosiers story has been exposed, it’s only a matter of time before Skip Bayless plummets in a downward spiral leading to the crazed moment he tells Jay Crawford he’s ready for his closeup.*  Now that would be a moment worthy of a primetime First Take special…

*I should know about classic movie references, I once performed “Who’s on First” for my 4th grade classmates.