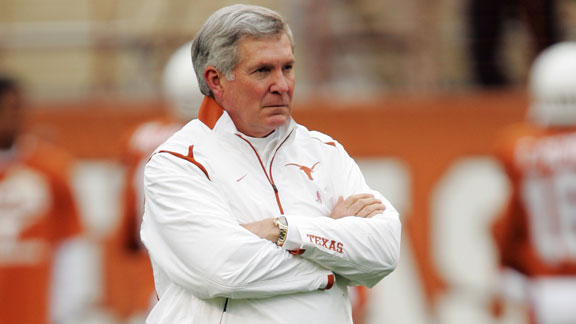 Ever since Longhorn Network debuted last August, it has been met with much derision and skepticism.  A lack of distribution deals and viewers have stunted LHN's growth in its first year.  Controversies erupted within the Big XII over LHN airing high school games and the inherent advantages of a team having their own in-house network and a new, enormous revenue stream.  Ethical questions have been raised with ESPN becoming business partners with one of the nation's most notable athletic programs.

And now, in a story that is too strange to be fiction, another vociferous critic of Longhorn Network has emerged.

Orangebloods.com reports paint the picture of a paranoid Brown worried about rival schools watching drills and practices on LHN, complaining about his time commitment to the network, and doing everything but blaming the network for his team's 63-21 loss to Oklahoma.  Here are the actual quotes from Mack Brown and story from Chip Brown on the immense trouble and hardship caused by a network that gives Texas an extra $15 million dollars a year in revenue that no other university in the country receives…

"We know they (opponents) have it for a fact," Brown said. "Lots of them do. And people are taping it across the country and sending it to the coach if they don't have it in their area. We know that for a fact. We've been told that too many times."

Brown even said if a player needs to have an ankle taped, the UT training staff will tape both ankles so anyone watching LHN won't know if a player is injured.

Brown said he's spending six hours a week minimum preparing, participating or traveling to the studio for shows that air on LHN.

"Art (Briles) and I were talking about it before the game," Brown said. "It's in Waco. Baylor sees every practice. So it's not like it used to be. We're a little overexposed.

"And I do have three shows over there that take you 20 minutes to get there and 20 minutes to get back and an hour to do them. So there's no question it takes away some of your time. And when you do a show, if your mind is somewhere else, you're screwing that up, too."

Brown said football spokesman John Bianco watches LHN to make sure ESPN isn't showing content that could be an advantage for opponents.

"It changes when you've got a microphone at every speech on the field and every drill," Brown said. "You definitely think about what Art (Briles) is thinking while he's sitting there, watching you talk and coach your team."

Brown added, "We were given a deal that we had no input in, and we're trying to make it the best we can for both. And at the end of the year, everyone's going to have to sit down and see what we need to change and what they need to change. But I think there needs to be some give and take both ways."

With each passing day, I'm becoming more and more convinced of the truth that Division I college football coaches are the most disturbed species on the planet.  LHN has taken its fair share of licks in its early existence, but give the network some credit for finally getting a distribution breakthrough earlier this year with AT&T, providing some hope for the future.

Amid that struggle for LHN to get into homes, if there's one person in the solar system who should defend the LHN flag until its dying day, it is Mack Brown… who, and let's make this crystal clear, benefits from LHN more than almost anybody else.  It's Oklahoma and Texas Tech and Kansas that are supposed to complain about the uneven playing field created by LHN, not Mack Brown complaining about the extreme inconvenience of having to do an extra studio show.  Common sense would dictate that being well worth $300 million over 20 years for the school and Mack Brown's football program.

Instead, Mack Brown is obsessed with having his training staff tape ankles that aren't hurt and protecting the secrecy of his 5-2 program like they are nuclear launch codes.  Does Mack Brown also take a different route home every day from the university for fear that Art Briles or someone from Baylor is following him?

I'm sure if Mack Brown had a better record than 18-14 since the beginning of 2010 and wasn't ranked #25 in the country, LHN wouldn't be such a thorn in his side.  Nevertheless, if Longhorn Network isn't worth the trouble for Mack Brown, I'm sure there are 119 other FBS schools around the country that would jump at the chance to start their own network with ESPN's backing and hundreds of millions of dollars in the process.  Then again, maybe LHN will outlast Mack Brown in Austin and he can find his peace of mind elsewhere.

"The water fountains weren’t working, and they ran out of water in the fridges in the press box. I’d never had a Dr Pepper before, and I wound up drinking four of them."

"The water fountains weren’t working, and they ran out of water in the fridges in the press box. I’d never had a Dr Pepper before, and I wound up drinking four of them."