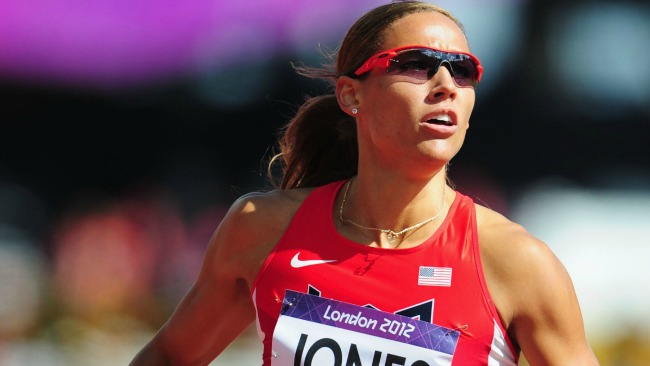 Lolo Jones is attractive.  She's an Olympic athlete.  She's a celebrity.  She's a virgin.  As of today, she's now the fourth fastest 100 meter women's hurdler out of over 3 billion women that populate planet earth.

But somewhere along the way Lolo Jones stopped being a person or an athlete and started being a story.  A symbol.  A label.  A debate topic.  She was overrated.  Overhyped.  Overexposed.

Heading into the London Olympics, Lolo Jones only stood behind Michael Phelps as the most famous American Olympic athlete.  It was easy to see why.  She was different.  Lolo Jones was a sex symbol who never had sex.  She was a would be gold medalist that never medaled.  She had a backstory that NBC primetime could only dream of crafting.  And she was able to take in all the pressure, all the hype, all the attention with a smile on her face.

But as the old adage goes, we love nothing more than building people up and subsequently tearing them down.  Ever since she got to London, Lolo Jones has been chipped away at from all angles.

First there was a mini controversy that arose after a shooting tweet Jones sent was taken out of context.  Then came a hit piece from the New York Times that criticized Jones for having the downright nerve to be good-looking and a good athlete and marketable.  How dare she!  Jere Longman delivered a sledgehammer that featured an expert comparing Lolo Jones to Anna Kournikova and more harsh words:

"Still, Jones has received far greater publicity than any other American track and field athlete competing in the London Games. This was based not on achievement but on her exotic beauty and on a sad and cynical marketing campaign. Essentially, Jones has decided she will be whatever anyone wants her to be — vixen, virgin, victim — to draw attention to herself and the many products she endorses."

Do you think any American male athlete would have to deal with this hot garbage?  Sad and cynical?  Jen Engel at Fox has a well spoken article on the hypocritical nonsense facing female athletes at the London Olympics.  Everything from Gabby Douglas' hair to Serena Williams' dancing to the empty shouts of progress now that each nation has a token female athlete has been a topic of conversation these Olympics.  Lolo Jones has been front and center of this storm.

Is she too attractive, too popular for her own good?  Should she not have been engaging with fans on Twitter or be as funny or as marketable?  Should she have turned down the ESPN cover and the appearance on Leno because God forbid Jere Longman didn't give her permission first?  What about her opening up about her story and then having the label "virgin hurdler" being used for mockery and derision and placed upon her like a scarlet letter in a testosterone charged sex obsessed world?  What about the tweets like this one in the wake of her fourth place finish at the Olympics that take joy in her not getting some on the podium or in the Olympic Village.

But it wasn't just randoms on Twitter quick to revel in Lolo Jones' shortcomings, even her own American teammates spoke out against her.  After a silver and bronze in the same event, Dawn Harper and Kellie Wells lashed out against Jones' popularity in an interview with Michelle Beadle.  While one can empathize with Harper and Wells being more successful on the track and less successful off the track, it's hard to listen to them take subtle digs at Lolo Jones and not get the sense that they delight in kicking her when she's down.

All of the pressure, hype, and criticism facing Lolo Jones came out on the Today Show this morning when she broke down in tears in an interview with Savannah Guthrie…

So now with her Olympic career likely over, it's a mystery what happens next to Lolo Jones.  Does she have any more endorsement deals?  Any more media appearances?  Does she fade away into relative anonymity?  Who knows at this point, but I hope Lolo Jones doesn't move out of the spotlight completely.  In spite of what some corners of the media have said, the sports world desperately needs more people like Lolo Jones.

But when those athletes finally come along, we can't wait to try to find something wrong with them, just like we did with Lolo Jones.  We can't wait to pounce when they don't match exactly what we want or expect from them.  But Lolo Jones doesn't need a medal or the New York Times or anyone to validate who she is as a person or an athlete.

Maybe it's not Lolo Jones that's sad and cynical.  Maybe it's us.