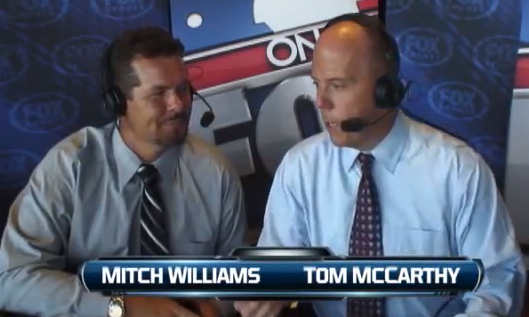 This year, NBA TV changed course for its NBA Playoffs coverage.  Instead of syndicating local feeds, the network hired national teams to cover games.  While it seems like a small detail, it was a significant improvement for fans.  Instead of hearing homerized calls from either the road or home announce team, National Basketball Association fans were treated to a proper broadcast deserving of the playoff stage with pros like Ian Eagle and Kevin Calabro on the call.

Now Fox is beginning to be asked the same question for its national Saturday MLB coverage.

Fox has been using local announcers for their national broadcasts for quite some time now.  A home team's analyst may be paired with a national play by play man like Kenny Albert, or vice versa, or one representative from each team's announcing pair may be present.

With Fox broadcasting so many games a week and the nature of baseball rights, it's somewhat understandable.  The TV announcers can't work those Fox games on local TV anyways, so why not bring them in to do the job since they're already there?  The wide majority of the time this has not been an issue as the local announcers are not merely working a syndicated feed, but working for Fox.  This means it has to be a straight-down-the-middle call with no favoritism.

The last two weeks though, this hasn't been so simple.

First Billy Ripken, who isn't even an Orioles broadcaster but an MLB Network employee, was roundly criticized for his perceived favortism last week in an O's-Tigers game.  Ripken has called 3 Fox games this season, all involving Baltimore for whom he played most of his MLB career.  Many saw Ripken's analysis and presence in the booth as heavily pro-Balitmore, including actor Jeff Daniels.  (How's that for a random drop-in?)

Then on Saturday current Phillies play by play man Tom McCarthy and former Phillies pitcher Mitch Williams called the Philadelphia-San Francisco game.  Listen to these two calls below and judge for yourself whether or not there is a major difference.  First, Giants P Matt Cain homers off Cole Hamels in the top of the 3rd before Hamels returns the favor in the bottom half of the inning.

Are you serious?  The first call might as well be Hawk Harrelson depressingly calling a White Sox walk off loss.  The first words from McCarthy and Williams are "uh oh" and "no way."  Yikes.  On the Hamels home run, both McCarthy and Williams are much more excited and clearly much happier.  Williams even throws in a "payback!" for good measure.  If I was a Giants fan or even a neutral observer, I'd be incredibly disappointed in the effort from the booth.

Unlike NBA TV though, the onus here is on the network and the announcers who know they're working a national feed.  McCarthy has to do a better job of finding some sense of balance and unbiasedness and Fox certainly needs to rethink this practice if it can't get straight-laced calls free of homerism.  It's not like the feat is impossible, just take a look at Brewers announcer Brian Anderson calling the Milwaukee-St. Louis NLCS for TBS last year.

If Fox gets more calls like the ones above on its national Saturday telecasts, it will have to follow NBA TV's lead and exclusively hire national broadcasters for their games.  Those baseball fans that happen to be outside a team's home market deserve better.