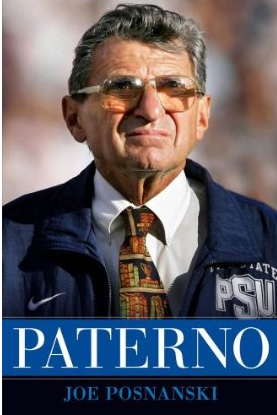 Next week is going to see the release of one of the most-discussed sports books in recent years, famed sportswriter Joe Posnanski's look at the life of former Penn State coach Joe Paterno, and there's finally some indication of what approach that book will take.  Posnanski's spoken vaguely about the contents of the book before (in a video interview that was quickly yanked, but preserved by Deadspin), but there have been very few specifics released. That changed with a piece Posnanski wrote for USA Today Thursday, discussing the book and explaining his approach:

The first words of the book came to me all at once:

"This is the story of a man named Joe Paterno, who in his long life was called moral and immoral, decent and scheming, omniscient and a figurehead, hero and fraud, Saint Joe and the devil. A life, of course, cannot be reduced to a single word, but …"
But … what? That was my book. There was the bloated superhero of Nov. 4, the savage villain of Nov. 5 … and I searched for the human being in the middle. I believe most of us live somewhere in the middle.

The book's contents have been generally kept under tight wraps, but the timing of its Aug. 21 release (which was moved up substantially from the original date of Father's Day 2013) has raised significant questions, as has the report that Sports Illustrated (Posnanski's former employer before he left for USA Today/MLB Advanced Media's joint Sports On Earth venture) elected to pass on running an excerpt of the book (although GQ has picked it up). However, Posnanski's comments Thursday make it clear that this won't be entirely either a hagiography or a demonization of Paterno. More from him:

No, I don't feel about Joe Paterno the same way I did when I started writing the book. But I don't feel about him the way his most blistering critics feel. He was a human being, filled with ideals and flaws, honesty and hypocrisy, charity and selfishness, modesty and the refusal to abdicate his throne. There was little simple about him. I chased the complicated story of a man and his long life. I hope that is the story I wrote.
From a media standpoint, there's a lot to admire about that approach. There's often more to stories than clear black-and-white judgements, and although Aaron Sorkin might disagree, there can be great value in media figures presenting arguments from both sides. Moreover, that's what makes Posnanski's writing so compelling to many of us; rather than shouting about Tim Tebow's greatness and taking the most polarizing positions possible (apparently what passes for journalism at some outlets these days), he's renowned for being able to see and present both sides of an argument (see, for example, this "People vs WAR" post, or this one about the merits of playoffs). However, you have to wonder if a telling-both-sides approach to Paterno will work, or if the extreme positions are so entrenched that everyone will hate Posnanski's book.
It's a polarized world at the moment, from politics to sports to media, and the Joe Paterno/Penn State story might be one of the most polarizing issues out there. The camps are well-established, too; plenty think writing anything positive whatsoever about Paterno and the Nittany Lions is tatamount to endorsing child abuse,  while others can't stand hearing any suggestion that such a legendary coach made mistakes or that his program should be punished for what happened. Some have even borrowed the "Carthago delenda est" model from Cato The Elder, and wouldn't mind seeing the Penn State football program razed and the earth (metaphorically) salted. In a world where much of the sports debate seems to be shifting to "who can have the most extreme opinion on a topic," the Paterno/Penn State story seems tailor-made to further the divide.
Posnanski's stated approach of presenting the full, complicated story of Paterno is journalistically admirable, far more so than if he'd just carried through with what appeared to be his original plan of a heroic biography of a coach, or if he'd ditched all the work he'd done on the good things Paterno did in favour of writing a solely-destructive takedown. With much of the world seemingly having already judged Paterno as an incarnation of either Gabriel or Lucifer, though, the question of if anyone will like the balanced approach remains.