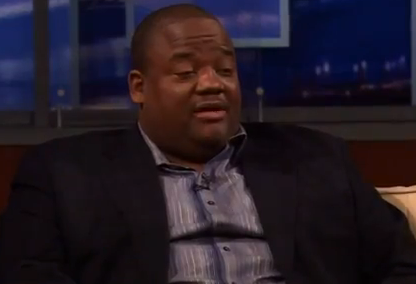 “I get Linsanity. I’ve cried watching Tiger Woods win a major golf championship. Jeremy Lin, for now, is the Tiger Woods of the NBA. I suspect Lin makes Asian Americans feel the way I feel when I watch Tiger play golf.

I should’ve realized that Friday night when I watched Lin torch the Lakers. For Asian Americans and a lot of sports fans, his nationally televised 38-point outburst was the equivalent of Tiger’s first victory in The Masters. I got caught up in the excitement. I tweeted about what a great story Lin is and how he could rival Tim Tebow.

I then gave in to another part of my personality — my immature, sophomoric, comedic nature. It’s been with me since birth, a gift from my mother and honed as a child listening to my godmother’s Richard Pryor albums. I still want to be a standup comedian.

The couple-inches-of-pain tweet overshadowed my sincere celebration of Lin’s performance and the irony that the stereotype applies to pot-bellied, overweight male sports writers, too. As the Asian American Journalist Association pointed out, I debased a feel-good sports moment. For that, I’m truly sorry.”

Whitlock references the Asian American Journalists Association, who officially called for an apology from Whitlock via their Facebook page.  Apparently, Whitlock is extremely fortunate that’s all the AAJA called for, as it appears he will keep his job with Fox unless other groups begin to call for more punishment and reader outrage becomes too overwhelming to bear.  As John Ourand pointed out, it doesn’t help matters that Whitlock’s apology is labeled a “Fox Sports Exclusive” as Whitlock’s columns normally are.  Congratulations on that scoop, truly well deserved.  The only thing missing was the word “Sources” in front of Fox’s headline.

A full weekend after Whitlock’s mindless tweet, sharks are still circling the water for blood.  The apology hasn’t been met with much acceptance from fans, readers (check the comments on the article), and other writers.  The hypocritcal nature of Whitlock’s Lin tweet shouldn’t be lost on anyone.  Only a month ago, he wrote this about himself and questions of race involving the firing of Oakland Raiders head coach Hue Jackson:

“Now, if you’ve followed my media career, you know I’m not opposed to fanned flames of any racial, ethnic or lifestyle variety, moving in any direction. “Just burn, baby” is my column motto. However, I prefer my fanned flames to be justified.”

Justified, eh?  It’s extremely disappointing and mystifying that Fox Sports is (as of the moment) going to take no further action.  The lack of public discipline or any sort of suspension hurts Fox Sports as it seems like they’re willing to let this kind of behavior pass without considerable action and sweep it under the rug.

Whitlock wants to pass off his racist tweet as his inner desire and quest to be a standup comedian?  Child please.  If he wants to quit writing today and try a comedy career, I don’t think anyone in the sports world would be desperate to stop him.  His “act” had grown old years ago and his most recent actions burn through whatever little credibility he had left.

Whitlock may want to deepen his cultural arsenal outside racial stereotyping and references to The Wire if he does pursue that second career though.