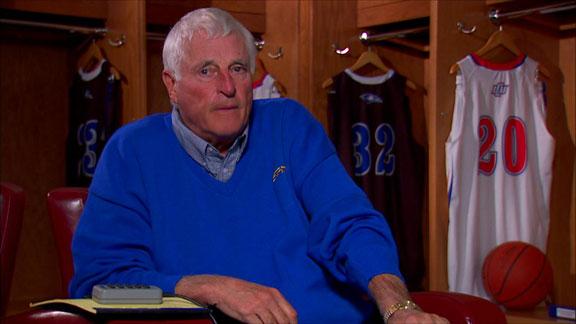 Since 2008, Bob Knight has been a college basketball analyst for ESPN.  He has largely avoided the level of controversy that plagued the latter stages of his coaching career in Bristol… except when it comes to one team and one coach in particular.  Kentucky and John Calipari.  Over the weekend, Knight mentioned a mysterious team from the SEC on upset alert that shalt not be named.  Does it speak well for ESPN and Bob Knight when he won’t utter the name of the school that is the odds on favorite to win the NCAA Tournament?

Wow, Bob Knight really is refusing to utter the word “Kentucky.” Basically put Cats on upset alert but refers to ’em as team “from the SEC.”

This situation between Knight and Kentucky is so blatantly childish that even Rick Reilly criticized his ESPN colleague on Twitter.  You know we’re deep in a quagmire if Rick Reilly is being the voice of reason.

What happens to Bob Knight if he says the word “Kentucky”? Does his lower jaw fall off? Snakes spring from his hair? My God, does he smile?

Now, Knight isn’t completely immune to speaking the name of Kentucky on ESPN airwaves.  When Mike Greenberg asked Knight about Kentucky on March 14th’s Mike & Mike show, Knight did speak the name “Kentucky” once when talking about the Wildcats entering the NCAA Tournament after a loss in the SEC title game.  However, Knight went out of his way to speak in generalities and mentioned no Kentucky players or Calipari by name when answering the question.

Knight’s grudge against Kentucky and John Calipari is well documented…

There was this quote from 2009 in a speech at the Indiana Basketball Hall of Fame that suggested John Calipari shouldn’t be coaching in the NCAA following his Final Four berths being vacated at UMass and Memphis:

“We’ve gotten into this situation where integrity is really lacking and that’s why I’m glad I’m not coaching,” he said. “You see we’ve got a coach at Kentucky who put two schools on probation and he’s still coaching. I really don’t understand that.”

Then in 2011, there was this quote that falsely accused the Kentucky program and players of not attending a single class, which Knight was forced to apologize for:

“There’s a situation in college basketball that really bothers me beyond anything that’s ever bothered me in my career.”

“Kentucky, year before last, started five players in the NCAA tournament games that had not been to class that semester. And that’s that one-and-done philosophy that we have now.”

But, when Knight goes on television and airs this grudge against the top team in the country it hurts himself, ESPN, and college basketball.  ESPN is stuck with Knight and voices that cover the sports media have insinuated Knight has his own set of rules at ESPN.  Just ask Jeremy Schapp.

ESPN offered a rare “no comment” when pushed by Matt Jones of Kentucky Sports Radio to provide insight into Knight’s vendetta against Calipari and Kentucky being played out for the world to see.

Knight’s point about the greater damage done to college basketball by the one and done rule and Calipari’s history of rule breaking and banners taken down is one that should not be lightly considered.  If there’s one thing Knight can hang his reputation on besides his winning record and national championships, it is his academic integrity.  It’s a conversation that definitely needs to take place.  Yet, when Knight goes about holding Kentucky accountable as the one and done symbol of college basketball in this way, it hurts his viewpoint.

For now though, it appears ESPN will continue to cover their eyes when it comes to one of their analysts leading viewers around by the nose.  Knight’s overall tenure has been a disappointment at ESPN.  His work breaking down a game as an analyst in the booth can be stellar, but he’ll never be Jay Bilas or Bill Raftery or even Digger Phelps in his ability to relate to viewers.  ESPN surely had hoped the gravitas of Knight’s sweater with an ESPN logo would be enough to make him one of the top analysts in the game and top voices on the network.  Since Knight began working at ESPN in 2008, it hasn’t worked out as well for either party as they had initially planned.  Knight’s extremely dry personality just doesn’t work well on television.  In fact, Knight has often drifted off into the Bristol ether, and outside this Kentucky flap, what has he offered as an anlyst that has been truly memorable?  Well, there was this.

Ultimately, the way he has chosen to carry out his vendetta against Calipari and UK hurts his credibility as a broadcaster.  Imagine Kirk Herbstreit refusing to call Michigan by name.  Imagine Jeff Van Gundy doing the same with the New York Knicks.  Does Knight even acknowledge the existence of Kentucky’s coming game with Indiana?  What is ESPN going to do if Kentucky makes the Final Four and wins the National Championship?  Does ESPN even bother involving Knight in the analysis?

With any other television analyst, this kind of behavior wouldn’t be tolerated.

But Bob Knight continues to play by his own rules.  Isn’t that what he’s angry at Kentucky and Calipari for in the first place?