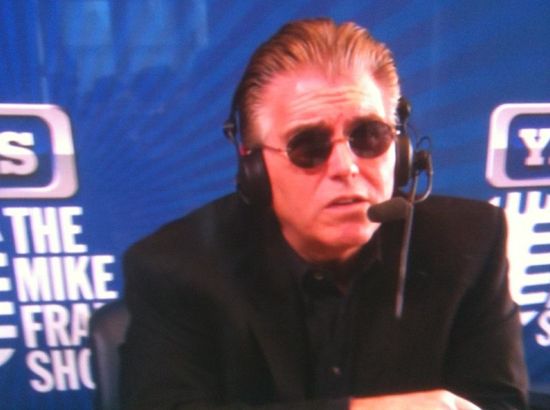 The self-proclaimed king of New York sports talk radio, Mike Francesa, may be leaving WFAN at the end of his contract.  For all you fans of the Diet Coke sipping, Al Alburquerque forgetting, Bill Parcells loving kingpin of New York sports radio, have no fear.  Francesa’s contract with WFAN goes beyond Super Bowl XLVIII in New York City till March 2014.  For all you haters of Mike Francesa, sorry, his contract with WFAN goes until March 2014.

As Neil Best reports in Newsday, Francesa is contemplating a departure from his longtime afternoon slot at WFAN where he’s ruled New York afternoon airwaves for more than 20 years, but may not be thinking of retiring from the industry:

Speaking after a show on which he hinted on the air he was mulling his future, Francesa initially said it was “50-50, at best” that he would return, then added, “I’m even saying I’m leaning toward leaving.”

Francesa has been at the station since shortly after its launch in 1987 and in the afternoon slot since 1989, the first 19 years with his longtime partner, Chris Russo.

He has been a ratings pillar for the station and has a contract believed to pay around $5 million per year. But he said it might soon be time for a change, although he has no plans to retire.

Francesa is in his fourth decade at WFAN.  No matter what you think of him personally, Francesa is one of the titans of sports talk radio.  Mike & The Mad Dog beginning in 1989 and lasting till 2008 is certainly one of the most notable and influential sports radio shows ever.  Even as a non New Yorker, I tried to tune into Francesa and Russo when possible because they were one of the more entertaining pairs in sports.  While Francesa can certainly come off as arrogant or flippant towards callers, I always found him to be entertaining.  That said, like other great combos in history, Francesa isn’t nearly as effective without a partner to buffer some of his more offputting qualities.

If Francesa does leave WFAN in 2014, it’s difficult to see him pursuing another high profile gig considering he’ll be almost 60 years old.  He certainly has the clout to do something nationally based and could make television appearances with a network that needs a buzzworthy personality or possibly something based with the NFL.  Maybe ESPN will make him a huge offer to debate Skip Bayless every morning.  My God, that would make the internet explode.

Whatever Francesa’s future holds, we’ll have to cherish (or curse) the remainder of his time at WFAN… which I think this clip sums up nicely…