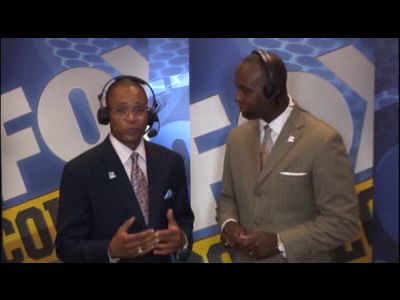 We’ve always joked how awesome it would be if Gus Johnson announced different sports.  There are even Youtube videos that imagine the possibilities.  After football and basketball season, we don’t hear from Gus very much outside his Showtime boxing work.  According to reports on Twitter, that has changed in a stunning way.

According to a tweet from an MLS official and later relayed by Sports Illustrated’s Grant Wahl, Gus Johnson is calling away games this month on the radio for the San Jose Earthquakes.

Yes, you read that correctly.  Gus isn’t even doing soccer on television, but on local radio!  And away radio at that.  It’s quite the arrangement for Gus to be calling away games for a team, but it makes sense given the location of games in New York and Philly on the East Coast.  Gus Johnson himself hinted trying something new when he sent out this tweet a few days ago..

I’m about to try something new, something that could change the direction of my career, life. Heres to a splash of color to the BG. Cheers!

If there’s anyone that could rival the most excited soccer commentators around the world in this country, it’s Gus Johnson.  And, his interest in soccer has been hinted at before.  In fact, the first tweet sent out from Gus’ Twitter account was a picture of himself at Milan’s San Siro for a Barcelona-Milan Champions League game back in March.

The arrangement to call select games on radio could be the perfect way to begin announcing soccer.  Radio calls are by nature much more detailed and pure play by play, so it would make sense to explore that field first before a move into broader markets.  Could there be bigger stakes with Gus calling soccer?  Keep in mind Fox not only has the rights to an enormous array of games on Fox Soccer and the Champions League, but the 2018 and 2022 World Cup as well.

As part of the News Corp. umbrella, Fox has syndicated with Sky Sports announcers for their Champions League broadcasts from the UK, including the legendary Martin Tyler for the CL Final on Fox.  ESPN went the British route for their last World Cup with all four play by play men hailing from the UK (Tyler, Ian Darke, Derek Rae, Adrian Healey).  NBC selected the excellent Arlo White from Leicester, England and the Seattle Sounders to lead their MLS (and darts!) coverage.  If you watch a major soccer game in this country, you’re likely to hear a British voice call the action.  That’s not a complaint by any means, more of a matter of fact.  Each of the names listed are top notch soccer commentators.  Someone like Gus Johnson could provide a uniquely American voice to the sport and even open up the beautiful game to new fans that may watch for the first time.

Could Gus Johnson calling these games be with an eye towards possible World Cup assignments later in the decade?  Given that it’s a full six years away, it is impossible to tell.  There’s no way to even predict if a hypothetical move will be a success (see: O’Brien, Dave).  However, Fox has made a big investment in Gus Johnson.  They continue to make a big investment in soccer.  Those two forces could very well converge in the near future.